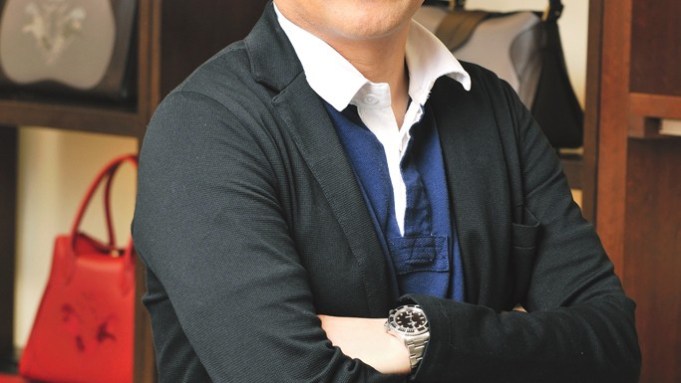 Japanese handbag brands that have their sights set on gaining a foothold in their home market — let alone anywhere else in the world — have their work cut out for them.

The Japanese bag market, which Euromonitor International currently values at 750.3 billion yen, or $7.54 billion, is mainly dominated by European and U.S. brands. Many experts agree that this is not likely to change anytime soon, and yet there have recently been a few domestic labels that are attempting to capitalize on the shifting preferences of Japanese consumers.

One such brand is owned by the company Barcos, which was founded in 1991 by Takashi Yamamoto. While the company produces several of its own brands, it also has a sizable business manufacturing private-label bags for general and specialty retailers. Currently, its largest sales channel is catalogues and TV shopping, and it has also sold its products to such stores as TJ Maxx.

Even though this kind of high-volume business is good from a sales point of view, Yamamoto wanted to reach a more high-fashion consumer. To that end, he opened an office in Florence, where staff track and interpret global fashion trends. These are then passed on to a Tokyo-based design team, and eventually are incorporated into samples produced by factories in China.

While this arrangement has proven successful — Yamamoto has had interest from some top department stores and boutiques in the U.S. and Europe — it is a system that is bypassed for the company’s newest brand. Called Barcos J Line, it comprises fine leather handbags and accessories that are priced on par with European luxury brands such as Gucci, Prada and Céline — bags start at 136,500 yen ($1,366) and go up from there — but are all made in Japan. The styles are simple and elegant, largely targeting women over 40 years old. The brand uses fine leathers and high quality materials, and some limited-edition items are available in exotic skins like crocodile and elephant (which Yamamoto assures is legally sourced).

“The Italian office isn’t involved with J Line,” Yamamoto said, pointing out just how different the tastes of Japanese consumers can be compared with those of shoppers in the West. “In reality, they would say that these bags won’t sell, but so far the response in Japan has been positive.”

Barcos J Line was developed partially because of a request from a buyer at Isetan department stores, who lamented the lack of Japanese handbag brands at the high end of the market. The line is currently available only at Isetan’s flagship in Tokyo’s Shinjuku district and the Nihonbashi Mitsukoshi flagship, which is operated by the same company. Yamamoto declined to give a sales figure, but said that so far sales have been about 50 percent higher than initial estimates. Still, the brand has a long way to go before it can reach the name recognition of its international counterparts.

“I think the main reason [overseas labels sell better] is that Japanese people still love bags from famous brands,” said Miyako Sekimoto, fashion director at Matsuya, another chain of department stores. “There are some local brands that are getting popular, but it’s in very small quantities.”

“Brand equity is the most important criterion for handbag purchases in Japan, surpassing concerns about price and design,” agreed Sulabh Madhwal, a personal accessories industry analyst at Euromonitor International. “International luxury brands have managed to achieve this through their premium positioning in retail locations, judicial use of advertising space in magazines and newspapers, and most recently, social media.”

The only Japanese bag brand to reach a level of popularity rivaling that of overseas brands is Samantha Thavasa, which currently ranks seventh in terms of share of the country’s bag market, with 2.2 percent, according to data from Euromonitor International. This is a larger share than that held by brands including Prada, Marc Jacobs, Loewe and Miu Miu.

Besides retail stores in enviable, high-traffic locations, Samantha Thavasa is also known for hiring international celebrities to appear in its campaigns and collaborate on designs. The current face of Samantha Thavasa is Miranda Kerr, and past models have included Paris and Nicky Hilton, Penélope and Monica Cruz, Beyoncé and Solange Knowles, Taylor Momsen and Victoria Beckham. The brand’s leather bags are priced around 30,000 to 40,000 yen, or roughly $300 to $400.

A spokeswoman for Samantha Thavasa said the business philosophy of the company’s president involves a three-pronged strategy. “It’s not enough to have the best products,” she said, “we also have to have the best store locations and the best marketing.”

The leading brand in Japan’s bag market is Coach, holding a 7.6 percent share in 2012. What’s interesting to note is that this has grown since 2008, when it was 6.3 percent. Conversely, the market share of some luxury brands, including Gucci and Louis Vuitton, has decreased over that same period. Consistent with its global positioning as an “affordable luxury” brand, Coach’s leather shoulder bags start at around 60,000 yen, or $610, in Japan.

“About two or three years ago, there weren’t any brands that competed with Samantha Thavasa in the market. Above us was Coach, and it was really just Coach or Samantha,” said Kazumasa Terada, chairman and president of Samantha Thavasa. “Then brands like Tory Burch, Kate Spade and Marc by Marc Jacobs entered the arena and the market itself, both from a business point of view and a fashion point of view, became more competitive. The feeling of tension increased, which I think is a good thing. It’s better when the market is competitive.”

Ajioka, a Japanese company with a history dating to 1917, is looking to get a piece of this growing middle segment of the market, to which end it has recently started producing locally made handbags under its own label, called Epoi. Founded as a manufacturer of men’s small leather goods, Ajioka has in the past held license agreements in Japan with more than 100 brands, including Givenchy, Yves Saint Laurent and Sonia Rykiel. Currently, it produces licensed products for brands such as Kenzo, Anteprima and Comme Ça Du Mode.

While the brand Epoi was established in 2004 with wallets and other small leather goods, it only started selling handbags about a year ago. Epoi’s small leather goods are available in more than 80 stores in Japan, while the bags are currently only sold at Barneys Japan and the brand’s first freestanding store, which opened in August.

Like Barcos, Ajioka has a substantial amount of production in China, but Epoi products are all made locally. The 30-year-old president, Shohei Ajioka, the fifth generation of his family to helm the company, says it is the responsibility of brands like Epoi to promote the fact that their products are made in Japan.

“Our customer service is much better than foreign brands’ because if someone wants to get a repair, we can repair it here so it doesn’t take six months or something like that,” he said. “Also, our quality is much better than made in China for sure.”

Epoi’s products are priced more accessibly that those of Barcos J Line. Bags start at about 30,000 yen ($300) and small leather goods start at about 10,000 yen ($100). Ajioka said he wants to keep prices affordable while maintaining quality, as many consumers are looking for products that offer more value for their money. Last year, Epoi’s sales were about $3 million, and Ajioka noted monthly figures have been increasing by about 20 percent each month since handbags were added to the collection.

“Constrained consumer spending since 2009 created growth opportunities for a few local brands as well as ‘accessible luxury’ brands such as Coach,” said Euromonitor’s Madhwal. “However, the target consumer for local brands remains limited.”

That may be true, but it is also becoming more apparent that brand recognition alone is no longer enough to succeed in Japan. And as more domestic brands fight for a bigger share of the market, international brands might find themselves having to reevaluate their strategy for what continues to be one of the world’s most influential markets.