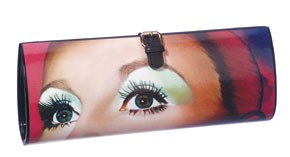 Mellon will unveil two limited edition bags — a clutch and a tote — at Art Basel Miami Beach this week that are the results of a collaboration with artist Richard Phillips, known for his close-up paintings of media images.

Both bags feature part of his paintings of beauty advertisements from the Sixties and Seventies. The Magazine is a hard-resin clutch that resembles a glossy folded in two. It shows a woman’s eyes glowing with green eye shadow and mile-long lashes, and was taken from the artist’s 1997 portrait, “Nuclear.”

The Tote is made from PVC-coated canvas. It has been covered with black-and-white images of women’s faces adapted from the 1998 painting “Riot.” The only color on the bag comes from the women’s bright eye shadow.

“For a while, we’d been wanting to do something with a contemporary artist, and I am obsessed with Richard Phillips’ work, especially his paintings of ad campaigns from the Sixties and Seventies,” Mellon, president of Jimmy Choo, said in an interview in her London office. “There’s a space on my wall at home that I am saving for one of his paintings.”

The clutch will retail for $595 and the tote will sell for $975. Both bags are for spring and will be sold at Jimmy Choo stores worldwide, and through some wholesale accounts, starting in January.

“I didn’t want to make these bags $5,000,” Mellon said. “I wanted to make them available to a wider audience. I’m also hoping that younger customers, who wouldn’t necessarily be able to afford our core product, can buy these.”

“People are so fascinated by contemporary art today,” she said. “I want our customers to feel they’re carrying a piece of art.”

Mellon also plans to host a dinner for Phillips at Art Basel Miami Beach, which runs from Thursday to Sunday.

The Jimmy Choo-Richard Phillips collaboration isn’t the first time a luxury house has joined forces with a contemporary artist. Louis Vuitton has worked with Takashi Murakami and Richard Prince on bags, Longchamps and Tracey Emin also created a bag together, and London’s Serpentine Gallery has just “curated” a bag for Puma, to name just a few.

“When I heard that Tamara considered ‘Nuclear’ to be an inspiration, I was very flattered,” Phillips said. “When she eventually contacted me, it was like the circle had closed. I’m interested in the way in which art makes its way into the world and how it reaches the public, and I’m also interested in how certain images can flow through the media, and become objects, how their power can go beyond the visual to become tactile.”