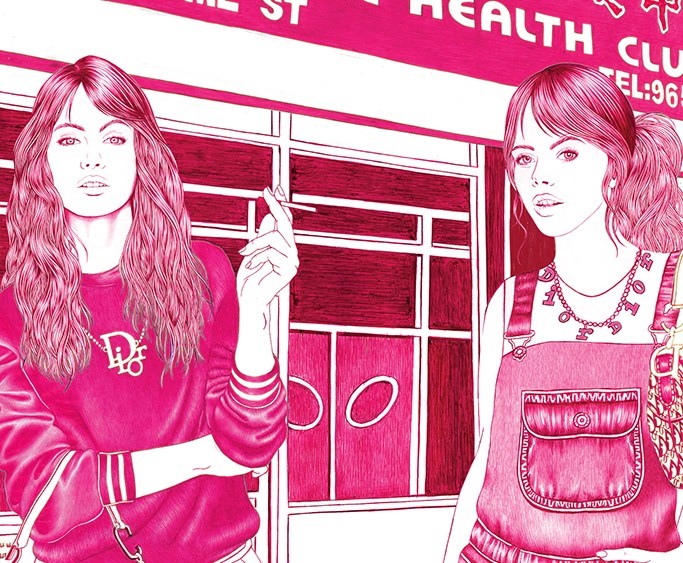 Fashion’s creative cogs have long looked back, enlisting nostalgia for inspiration. While often begrudged by some fashion observers, that same ethos is now rekindling interest in accessories from the John Galliano era at Christian Dior, which ran from 1996 to 2011. A hankering among Millennials for nostalgia is rehabbing the designer’s tarnished legacy of his days there — spawning renewed, reappropriated interest in his logo-laden accessories designs for the French house.

Galliano’s Dior Saddle bags and logoed rhinestone jewelry were last popular in a time before “Project Runway,” live-streams, Instagram — all cultural phenomena that opened the public access floodgates to fashion’s insider juggernaut. To many, this renders Galliano’s Dior designs relics of a comparatively underground time in fashion history — an era when forward-thinking trends were less exhaustively broadcast. It’s a sentiment that has sent the value of early-Aught Dior accessories surging by up to 50 percent in the last two years, according to retailers in the resale market.

The Galliano-era Dior accessories have been popping up in New York watering holes frequented by downtown die-hards. It’s not uncommon to see a miniature Saddle bag taking a spin on the subterranean dance floor of Lower East Side haunt Happy Ending (illustrated above), or cozying a bottle of Club-Mate at a Bushwick warehouse party.

Resellers report that two years ago, shoppers didn’t even consider Galliano’s Dior bags — a runoff effect of the scandal caused by his anti-Semitic remarks made in 2011 that resulted in his dismissal from the house. But even before that, the designer’s bright, brash, more-is-more, logo-heavy bag styles and their celebutante poster girl Paris Hilton had lost momentum as the aesthetic championed by Phoebe Philo and her minimalist concept for Céline took hold.

The Saddle bag was most popular from 2000 to 2005. Throughout its history, the style had exhausted a library’s worth of visual references, from Rastafarian culture and newsprint to the Maharaja, matador costumes and more.

Now, the market appears ready to embrace extravagance again. Beyoncé Knowles was even spotted wearing a gray tie-dye Saddle style in the fall.

“Until recently I stopped taking in the Saddle bag, I couldn’t have given them away. But in the past two months, I’ve brought them back into the store to sell again,” said Christos Garkinos, co-owner of Decades in Los Angeles, where Saddle bags steadily sell for $400 and Galliano-era Dior jewelry ranges from $500 to $1,000.

Garkinos reports that the value of Galliano-era Dior bags and jewelry has increased by 30 to 50 percent across the board in the past two years.

“They are from a time in fashion that was less Internet-driven, and less [available] to a major audience,” he said of the accessories’ under-theradar appeal.

Similar increased interest has been reported from the reselling fray — from New York bargain- basement chain Beacon’s Closet to luxury consigner Ina. Both retailers said they, too, had not accepted consigners’ Dior pieces from Galliano’s time until recently.

Online luxury reseller The Real Real said interest in those handbags has increased by 25 percent in the last year. On the apparel side, Galliano’s “J’Adore Dior” T-shirts for the label, which originally sold for $195, are realizing that full price on the resale market, the retailer said. The majority of the site’s Galliano-era Dior consumers are concentrated on either coast and represent a generally younger customer warming to designer merchandise.

Ina’s Ina Bernstein said since accepting Saddle bags and Dior jewelry into her stores less than two years ago, their typical sell-through periods have shrunk from three months down to three weeks.

“Younger women are loving all these [Dior] pieces; they were children when these were designed. I think with fast-fashion there is a sense of boredom for young fashion girls who want to look more interesting and unique,” Bernstein said of the bags’ intrigue.

New York photographer Amy Lombard is among the Millennials aiming to snatch up a Saddle bag on the secondhand market.

“There are so many things I wanted growing up that I couldn’t afford — my mom was not going to buy me a Rasta Dior Saddle bag in my teens. It’s this nostalgic icon in my mind,” she said of the style’s sentimental value. Lombard has scoured The Real Real, but has yet to nab a Saddle bag, as they have all sold out before she’s had a chance to make a purchase — a fact that “breaks my heart,” she said.

According to Lombard and others, purchasing a Saddle bag and other Galliano-era Dior designs on the secondhand market is not a pardoning of the anti-Semitic remarks that led to the ouster of the designer, who is now creative director at Maison Margiela.

“I guess you could argue that me loving the Saddle bag is supporting John Galliano designs and therefore supporting his personal beliefs, but I think there is the idea of separating his personal stuff from the designs he created — it’s sort of a dodgy area, I admit,” Lombard said.

According to branding consultant Jenné Lombardo, “People will want to overintellectualize it. I really think it’s more reactionary and a response to wanting something that is colorful and animated, as opposed to, ‘I want to champion this guy’s comeback.’”

The return of logomania vis-à-vis an ongoing streetwear fad might have more to do with it. Galliano’s more-is-more Dior aesthetic benefits from the “It” insignia-heavy designs by the likes of Hood by Air, Off-White and Supreme.

Secondhand Dior’s price range is also working in its favor, clocking in around popular streetwear’s same price points of under $400.

With many Galliano-era Dior designs screaming the brand’s name (often in rhinestones), these pieces “are like spending less and making a maximum impact,” said Lombardo. “Subtlety is not a words these kids can relate to at all,” she added of the adopters’ taste.

They also play up the same “very rare” aspect that drives the streetwear market now. No longer available for purchase en masse at department stores, carrying a Saddle bag, according to Garkinos, “represents a different type of badge now. It’s a fashion badge, it’s a cool badge, versus a badge of consumption.”