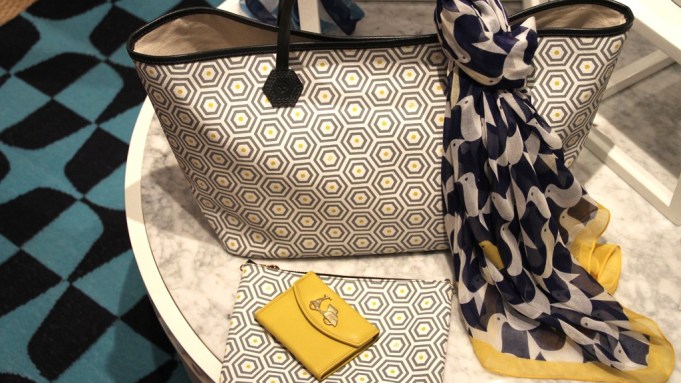 The collection, which includes handbags, totes, belts, scarves, hats and small leather goods, will debut during August Market Week. It will be available in the spring at Adler’s 22-plus stores and Web site, and at premium retailers.

“It’s amazing to go from being a production potter to expanding into a zillion different categories,” Adler said, adding that jewelry is in the works. “It ain’t ready yet, but it’ll be ready for fall [2013].”

Adler didn’t rule out designing apparel at some point. “I started as a potter, but so much of what I do is textile-based,” he said.

The new brand will be part of the growing luxury fashion business of LF USA’s fashion and accessories and home group. The collection encompasses about 300 styles and colorways, including bright red leather wallets and change purses with bronze hearts, $90 to $190; leather belts with bronze anchors, owls and key-shaped buckles, $48 to $98; scarves, $78 to $195; hats, $88 to $125, and handbags, such as totes, clutches, crossbody bags and wristlets, $195 to $450. Leather, coated canvas, jute, linen, beading, rope and patchwork details are among the materials used in the spring collection.

“It’s about color and chic and taking a lot of my signature patterns, style, craft and joy,” said Adler, who put details such as three pockets with illustrations for specs, keys and a phone inside a large tote. Colors include warm and cool neutral tones with pops of red, orange and turquoise.

Adler’s no stranger to collaborations and licensing deals. In October, he helped eBay open a holiday “EBay Inspiration Shop” on Park Avenue South. Adler has appeared on HSN to sell his graphic pillows, throws, zebra rugs and occasional tables. J.C. Penney Co. Inc. is opening a Jonathan Adler shop for a collection he’s calling Happy Chic, based on his company’s motto.

Adler in the fall will unveil stores in Portland, Ore.; Denver, and Washington, D.C. He is also releasing his fourth book and launching new collaborations with Kravet and The Rug Co.