The boldly patterned totes and clutches hit the designer's e-commerce site and 16 freestanding stores this month. 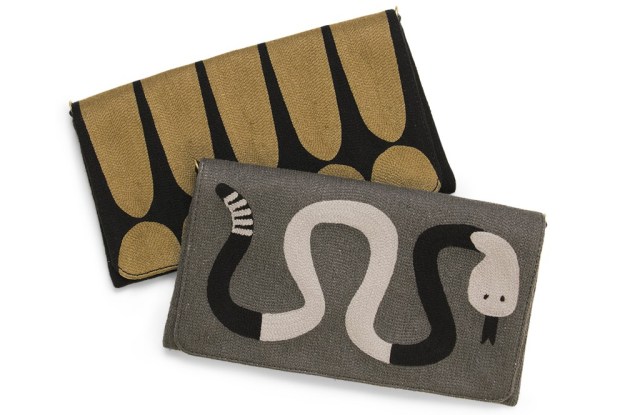 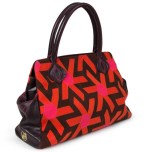 Jonathan Adler’s burgeoning home decor business is expanding into women’s handbags and accessories this spring. The boldly patterned totes and clutches hit Adler’s e-commerce site and 16 freestanding stores this month. In April, the designs will be available via Shopbop.com and Neiman Marcus Direct.

“We’ve always had a lot of fashion customers come into my stores and say that a pillow or vase design would make a great accessory,” said Adler on the phone from Madrid, where he received an award from Architectural Digest España on Thursday.

The fall line adds a more substantial handbag style in chainstitch wool/cotton with leather handles and side pockets that retails for $495. Lively motifs adorn the collection throughout, such as snakes, pinwheels and geometric patterns. Smaller pouches and cardholders fashioned from PVC are decorated with icons like scooters and sailboats or words such as “Lust,” “Peace” and “Sparkle” in vintage fonts.

This launch is the second time Adler has tried his hand at bags. A short-lived license in the category was yanked a number of years ago.

“The first time I took a crack at it, I felt the bags were beautiful, but they were a bit too formal and too pricy,” said Adler, who is producing these new bags in-house. “My customer is a little bit more bohemian and eccentric.”

Adler recently made another foray into the fashion space with a men’s neckwear line, licensed to Randa Accessories, which will be in stores this summer.

Adler currently has 10 license partners, with lighting, electronic accessories and stationery being the largest categories. The company plans to open two stores in the second quarter of this year in Minneapolis and Dallas, with another four to six doors slated for later in the year.

In March, Adler will launch the handbag line with a party at the home he shares with his husband, Simon Doonan, the author and Barneys New York creative ambassador-at-large.