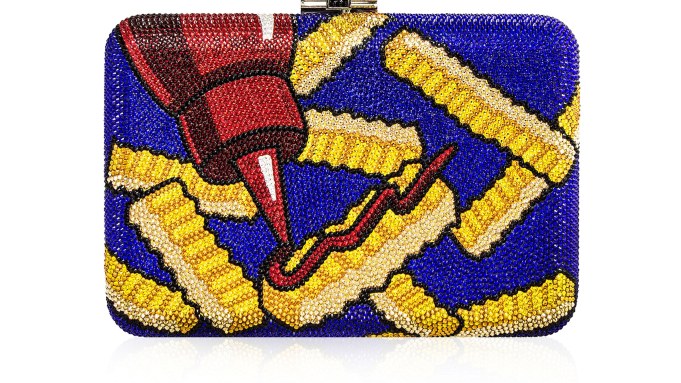 The brand unveiled its first collection of Ocleppo’s design in New York Monday, created for the holiday 2017 season. WWD has also learned that the brand will release a collection with Alexander Wang and launch a diffusion line within the calendar year.

In January it was announced that Ocleppo had forged a strategic partnership with Authentic Brands Group for the Judith Leiber brand. As part of the deal, Ocleppo was named as the brand’s co-owner, creative director and global brand ambassador.

Ocleppo has a minority stake in Leiber and works with the ABG team to develop the brand’s core collection, while also helping it expand to new categories, distribution channels and territories.

Pieces including the spaceship design come loaded with LED lights, marking the top tier of the brand’s pricing. Leiber Couture will also launch a line of interchangeable novelty straps and an online customization center, both growing trends for the luxury space.

“I think just the general DNA of the brand was important to keep. I wanted to take somewhat of a departure, but you never want to alienate your core customer. I wanted to modernize and also explore different technologies, leathers, fabrics — which is why did the bags with some LED lighting. It’s very futuristic and on trend.

“In today’s political climate I feel like there is so much negativity, that, thank God for fashion. I think we want to have some fun — this was all very refreshing,” Ocleppo said at the press preview for her designs.

Ocleppo, a seasoned bag designer, added of Leiber’s opportunity: “I feel like the brand kind of picked me serendipitously. I had my own brand for a while and sold the biggest part of my company to Kate Spade, but I wanted to continue to do something in the handbag space. Judith Leiber is already a heritage brand that’s been around — I don’t have to deal with the same challenges I faced while trying to start my own brand. It already had the infrastructure in place.”

In addition to Ocleppo’s updated Judith Leiber Couture designs, the brand intends to further elevate its fashion cachet through collaborations. In October, it will release a collection designed by Alexander Wang. While the label did confirm the Wang collaboration, additional details could not be learned.

In October 2016, the Leiber brand collaborated with the fashion label Libertine for a modernized, exclusive, two-style collection sold exclusively at Bergdorf Goodman. At the time, the label said it hoped to continue this style of commerce as it looked to gain a new, younger audience.

To bulk up volume, Judith Leiber will also launch a diffusion line with distribution at retailers including Macy’s and Nordstrom. The line will be approximately priced from $95 to $450 and will grow to encompass categories including apparel, jewelry, watches and footwear. This line, too, is slated for an October launch at retail.

Authentic Brands Group’s senior director of women’s fashion brands, Jennifer Karlik, noted that Leiber hopes to increase its sales volume by at least 20 percent by the end of 2018. It looks to lower its average consumer age from mid-40s to early 30s.