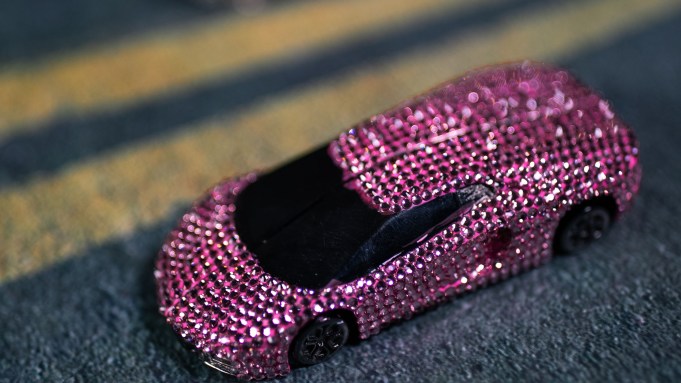 As the creative director and co-owner of Judith Leiber, Dee Ocleppo Hilfiger, by her own account, “gets to play with glitter and sparkles every day.”

The designer, in partnership with Authentic Brands Group, has renewed the luxury evening bag brand — leaving behind most of its uptown iconoclast mallard and poodle-shaped minaudières to make room for cheeky styles that reflect today’s zeitgeist.

The brand says these efforts are quickly paying off, reporting that revenue is up some 20 percent since 2017. Ocleppo Hilfiger’s husband, Tommy Hilfiger, said that e-commerce sales at JudithLeiber.com outpaced projections by 100 percent in the last two quarters of 2018. The brand is now carried in some 250 doors worldwide and department store sales have increased by 25 percent year-over-year.

ABG acquired the Leiber business in April 2013 and Ocleppo Hilfiger joined  in 2017, aiming to freshen up what had become a cocktail party institution. Through collaborations with Alexander Wang, Disney, artist Ashley Longshore — and soon collections with the Warhol Foundation and the graffiti artist Kenny Scharf — Ocleppo Hilfiger has grown brand equity among a new generation of clientele. The brand’s collaboration with Wang — stylized as a sparkly roll of money — sold out in under six minutes on the Judith Leiber web site.

Rhinestone brick cellphones, emojis, and a full smorgasbord of fast food — hamburgers, french fries, soft serve ice cream, and soon, a hot dog — have drawn fanfare in regions “where the world’s wealthy are,” according to Natasha Fishman, ABG’s executive vice president of marketing, noting the bags do particularly well in the Middle East, Russia and the U.K. Judith Leiber bags retail from $795 to $6,995.

“The litmus test [of success] for me is that I’ve seen Alibaba has made copies of the french fry bag — there is a $9 version out somewhere. When you see that, you know you are onto something,” said Ocleppo Hilfiger, who also operates a namesake label through an Italian licensee.

“It’s tongue-in-cheek, it’s supposed to be something fun,” she added of the brand’s resonance. “Part of our testing is when we are in the offices and sort of laugh about an idea when we decide to do it. It’s why people are responding.”

Now with renewed public interest, Ocleppo Hilfiger is planning to take the Leiber message even further. The brand has inked a deal with G-III Apparel Group for a line of “affordable apparel, clothing and shoes,” set to launch for holiday 2020. Children’s wear loosely based on Leiber handbag designs will be created in partnership with the Children’s Apparel Network. A Judith Leiber fragrance is also forthcoming.

“It’s one of the few luxury accessory heritage brands we have here in the U.S. [Leiber] started her company in the Sixties and it has been around ever since — that cannot be said for most brands,” Ocleppo Hilfiger said of the history she can build upon. Brand extensions including a costume jewelry line as well as a greeting card imprint with Papyrus have already launched.

“Prices have been at the high end because of quality and workmanship; there hasn’t been discounted product in mass retailers,” Hilfiger added of the brand’s enduring legacy.

At last month’s Met Gala celebrating “Camp,” a theme for which the Leiber brand seems made, the label was prominently carried by Zendaya, Lady Gaga, Katy Perry, Ashley Graham, Jennifer Lopez, and Kendall and Kylie Jenner, among others. The brand reports that these endorsements garnered some 110 million social media impressions, about 8,000 new Instagram followers and nearly 200,000 Instagram profile visits.

“We are going back to that cycle of more-is-more,” Hilfiger said of the label’s new popularity. “Who would have thought someone would carry a $5,000 evening bag with french fries? We were thinking, ‘This is kind of fun.’ We didn’t realize it was going to sell out of Bergdorf Goodman and we’d be scrambling to make more.”

Despite their glitz, Ocleppo Hilfiger said that the bags, “are not only for a few nights out, they are not in a closet, they are out in my dressing room and I look at them every single day. They are meant to make you smile and make you happy, not just to be carried out one or two nights.”