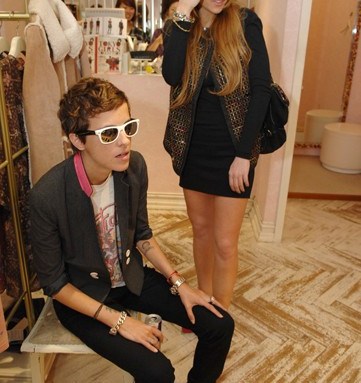 Lohan, clearly enjoying a respite from throngs of L.A. paparazzi, was clear on her priorities for the trip: “Walk around, have as much sushi as possible — because it’s the best — and shop,” she told WWD in an interview at a cafe outside her hotel here, beating the heat of an unusually warm fall day in a black-and-white striped halter top, black pants and a pair of Ray-Bans.

The handbag, a slouchy canvas satchel with leather pockets and studded charms, is exclusive to Charlotte Ronson stores in Japan and costs 29,400 yen, or $295.91. Coming just a week after the actress launched her own line of leggings at Henri Bendel, the handbag project is Lohan’s second step toward becoming an actress-slash-designer. Lohan recently founded her own brand development firm, Stay Gold LLC, to develop merchandise under the label 6126.

The actress disclosed she’s in talks with Italy’s Fornarina about developing a more full-fledged fashion collection. Lohan knows the company, since she’s the face of the brand’s latest advertising campaign.

“It takes a year to develop a line, so we’re in talks [about] how soon we can start developing a line now,” she said. “Eventually maybe one day I’ll have my own store in Tokyo, which would be amazing and I’d be here a lot more often.”

The actress, whose hard-partying rep and past bouts with substance abuse have upstaged her acting career in recent years, is working on her third album and preparing for the spring release of her next film, “Labor Pains.” She said the media frenzy surrounding her has died down thanks to her own newfound sense of priorities.

“I think that I just haven’t given anyone reason to kind of bring it to the level that it was at before by focusing on everything that I do on more important things and things that are more important to me,” she said.

Lohan, Charlotte and Samantha Ronson, the designer’s DJ sister and Lohan’s girlfriend, made a similar trip here last year. On Wednesday, the trio stopped by the Charlotte Ronson store for a photo op and a chance to snap up some pieces of the Ronson line exclusive to Japan. Lohan’s loot included a cropped white plush jacket, several striped tops and a black miniskirt with suspenders. Samantha Ronson opted for a tight varsity-style jacket and a few scarves.

Later that evening, Lohan sat front row at Charlotte Ronson’s fashion show, staged on an extralong runway in a sports stadium, while the designer’s sister spun a mix of Guns N’ Roses, Kings of Leon and vintage Madonna. Thursday’s schedule included a visit to the nearby beach town of Kamakura to see its famed giant Buddha statue and plenty of shopping before flying home the next day.

Charlotte Ronson, making her fourth visit to Japan, said she’s eager to finally take in a bit of Japanese culture since work has dominated her previous trips.

“[Thursday] is kind of our day to explore…which is nice because normally when I come I don’t have much time to actually see Japan,” she said, adding she was also looking forward to stopping by Kiddy Land, an Omotesando emporium of gadgets and quirky gift items, to buy souvenirs for friends.

Her sister, on her second trip here, raved about the eclectic neighborhoods and street fashion of the city, especially the Goth costumes on display in Harajuku’s Laforet retail complex.

“They have a style and they go with it full force, there’s no in between,” she said. “It’s so full blown and dope.”