By Lauren Benet Stephenson on May 25, 2010
View Slideshow 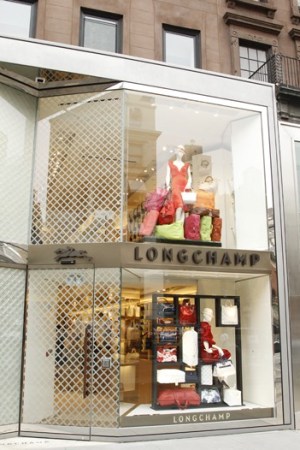 NEW YORK — Longchamp has a fresh look on Madison Avenue.

The revamped 2,500-square-foot space between 63rd and 64th Streets launches today. Longchamp will unveil a similar design in other stores but will not “apply this new concept in a cookie-cutter manner,” chief executive officer Jean Cassegrain said. “We will add elements of personality from [the space] to every store.”

The former design dated to 1999, and “we needed to realign our physical look to what the brand had become,” he said. “There were some practical issues, such as integrating the ready-to-wear collection.”

Cassegrain hopes the redesign will set the brand apart from competitors.

“We think that it matches our image very nicely insofar as it’s modern and cool but not cold,” he said. “It’s warmer than most of our competitors are, who tend to be icy sometimes. We want to show the colorful, playful characteristics of the brand. We don’t take ourselves very seriously,”

To be sure, there are some quirky touches, including a retail display homage to Parisian booksellers along the Seine and an elevator with a depiction of the Eiffel Tower on its ceiling.

Eric Carlson, founder of Carbondale architecture studio, tried to marry the brand’s rich history with a forward-thinking design. “There was a desire for contemporariness and a desire to respect the past,” he said.

There were also the physical constraints of a “tunnel-like” Madison Avenue space to consider, he said. “So the challenge was, ‘How do we give a big window display?’ And the way we did that was a very simple move, and a very unusual move for Madison Avenue, which is to fold the facade.”

This aesthetic is apparent with a two-floor storefront crafted into a convex “V” glass exterior. “The whole concept of folding is based on the famous pliage — pliage in French means fold — so this whole idea of folding becomes the theme for the store,” Carlson said.

The folding pattern is pervasive, with blond wood shelves that angle toward and away from the consumer as she strolls the length of the space — and takes its inspiration from the brand’s top-selling, folding handbag, Le Pliage.

The LM crisscross equestrian pattern (which stands for “longchamp maroquinerie” or “longchamp leather purveyor” in English) that lines most of Longchamp’s bags, is woven throughout the store. The front door is etched with the pattern, and it’s subtly visible on the white lacquered walls.

Beyond physically providing space for the rtw collection, Carlson hoped to create a runway effect with a long walkway of gleaming, poured terrazzo. Mannequins in Longchamp designs line the interior. The first floor opens into an elongated atrium space, with a chartreuse-turbaned mannequin at the back wall. The mannequin will be silhouetted by artwork from Venezuelan kinetic artist Carlos Cruz-Díez in the next few weeks.

The store concept also makes studied use of vertical space, with a first-floor ceiling that gives way to a staircase lined with rainbow-hued Le Pliage bags, and a floor-to-ceiling video presentation. These elongated features were designed “to give a sense of verticality and elegance,” Carlson said.

A series of vertical shelves on the second floor house the eight sizes of Le Pliage in a dozen colors. The shelves’ white laminate slabs are set diagonally from the wall so the shopper on the second floor, as well as the prospective customer peering up from Madison Avenue, can view all styles and colors from every perspective.

The rear mezzanine displays Longchamp’s small canvas goods, such as wallets, and leads to a darker, more masculine-themed presentation of men’s bags and luggage.