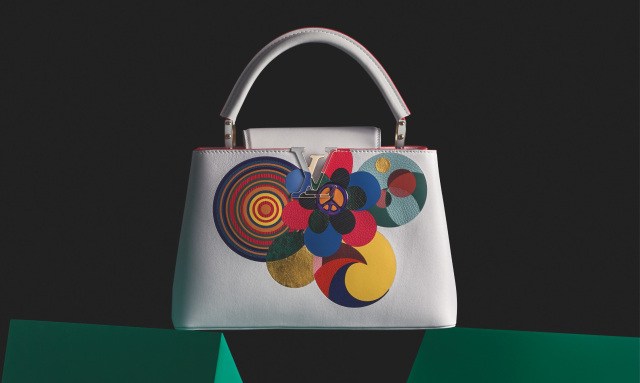 PARIS — Louis Vuitton is known for its handbag collaborations featuring graffiti, cartoon cherries and even the Mona Lisa. But this year’s edition of its Artycapucines project delves into darker subject matter, with bags that are as eclectic as the artists who designed them.

For the second year in a row, Vuitton commissioned six contemporary artists to customize its Capucines bag. The collection will go on sale on Oct. 30 in selected stores worldwide, with each bag limited to 200 pieces, priced at 6,700 euros.

They range from painterly creations by Henry Taylor and Josh Smith, to intricate assemblages by Beatriz Milhazes and Zhao Zhao, alongside more sculptural creations by Jean-Michel Othoniel and Liu Wei.

In recent years, Delphine Arnault, executive vice president in charge of supervising Vuitton’s product-related activities, has been instrumental in orchestrating its projects with artists, ranging from a blockbuster collaboration with Jeff Koons in 2017 to the Artycapucines project, which reflects a growing attention to diversity.

For this edition, Taylor, best known for his portraits of subjects ranging from celebrities to homeless people, used his bag to pay tribute to Noah Davis, the late artist who turned three derelict storefronts in Los Angeles into the alternative art space known as the Underground Museum.

Taylor’s 2017 portrait of Davis, “A young master,” was reproduced on leather using 2-D and 3-D printing to replicate the original brushstrokes, and then inserted on a taupe leather background.

“Noah was a real visionary to put together a grassroots community museum like Underground. It’s the most progressive space in L.A. So putting his portrait on this bag is my way of keeping him here and present,” he said of Davis, who died from cancer in 2015 at the age of 32.

“I could have put [Dr. Martin Luther] King or Bob Marley on the bag, but I like the idea of putting Noah in the mix and having people inquire about him,” Taylor added. “Seeing the completed bag is beautiful; it makes me want to cry.”

In keeping with his own art practice, Josh Smith printed and embroidered his first name on a textured background, in reference to his signature “name” paintings. The materials mirror those of a canvas, so the handle is made of pear wood, while the silk inner lining is painted with “Palm #3,” another of his brightly colored paintings.

“If people ask me why I paint my own name, I just say, ‘Well, it’s much better than so many other things.’ You know, some painters make a big abstract mess, others draw faces, and I paint my name,” he explained.

Smith hopes the bag will be a conversation-starter. “I think it’s the most obnoxious or provocative decision, really. Louis Vuitton puts its name on all its stuff, so I feel like my name should float on top of theirs,” he added.

Milhazes created a geometric composition based on her kaleidoscopic paintings. The Brazilian artist’s color-blocking technique was translated into avant-garde marquetry, thanks to which the pattern was re-created using 18 different types of leather.

Othoniel, known for his sculptures made of twisting lines of glass beads, approached his bag from an architectural perspective. It has a raffia body trimmed with black satin, and a handle made of black resin beads with a matching charm, designed to evoke the spirit of summer in Saint-Tropez in the Fifties.

In a distinctly darker vein, Zhao’s motif was based on his 2018 work “In Extremis No. 3,” which represents the scattered remains of a cat run over on a busy road using fragments of brass and steel inlaid into asphalt. Here, the surface of the bag consists of 353 individual laser-cut patches made of five types of leather.

“‘In Extremis’ is an exploration of the process between life and death. I use the image of a cat lying dead on an asphalt road, like a beautiful carpet, but it’s more about human conditions than the brutal death of an animal. It’s the flashback of an entire life, in which pain, happiness and beauty are all important elements,” Zhao said.

“Choosing to apply this artwork to my Capucines bag meant it would not simply be fancy or functional; it would also represent my understanding of the state of ‘in extremis,’ which is a profound subject,” the artist explained. “During the process of testing different materials and colors, I felt that we were not just repurposing the artwork, we were actually upgrading it.”

Fellow Chinese artist Liu Wei is known for an eclectic oeuvre that ranges from sculpture to paintings, videos and installations. His 2004 work “Indigestion II” is a two-meter-wide sculpture shaped like excrement, while “New World” incorporates household appliances, including a refrigerator and a pancake maker.

His bag design references neither of the above, but rather “Microworld,” a sculpture consisting of undulating aluminum plates that was shown at the 2019 Venice Biennale. These are re-created using panels of thermo-molded silver leather applied to the bag or attached using rivets.

“To me, art isn’t something beautiful or luxurious; it should derive from and connect with real life,” Liu said. “‘Microworld’ explores the blurring of boundaries between reality and the virtual world. The macroworld we live in today — everything we see and everything we know — is based on some kind of system, whereas the microworld is a more direct and personal expression of reality.

“For Artycapucines, it was more important to make a bag that addressed uniqueness rather than simply beauty. A bag is almost like a place to store one’s own unique microworld, even if I didn’t give much thought to functionality. For me, the bag itself could be an installation, and re-functionalizing it becomes a kind of beauty in itself,” he concluded.