Products including key rings and necklaces will incorporate words from country hits and faith music. 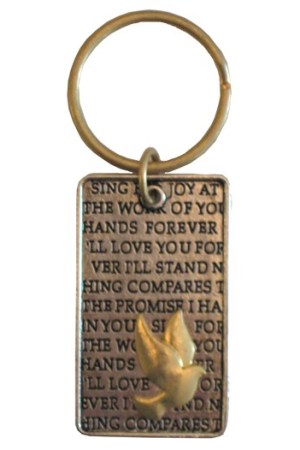 NEW YORK — After five years of performing in clubs such as the Bitter End and Troubadour in West Hollywood, singer-songwriter Hanna Rochelle Schmieder realized she didn’t have what it takes to be the next Annie Lennox, one of her idols.

This story first appeared in the May 23, 2011 issue of WWD. Subscribe Today.

She got the idea for her next gig at a studio session when she arrived wearing jeans with the lyrics to a new song scribbled on one leg. The reaction was instantaneous. Jack Douglas, her producer, said, “Steven Tyler would kill for pants like that.” INXS, recording in the studio next door, asked Rochelle Schmieder to make jeans for them with the lyrics to “Suicide Blonde.”

That was five years ago. Today, Rochelle Schmieder’s company, Lyric Culture, is listed on the OTC stock exchange, owns the rights to hundreds of music catalogues and produces three distinct lines for three different channels of distribution.

Song lyrics are carved into jewelry, screen printed on T-shirts and scarves and emblazoned on canvas bags. Every T-shirt has a copyright notice and the name of the singer.

Rochelle Schmieder sees the business as a way to generate new revenue streams for musicians by bringing their words to life visually. The company’s slogan is, “Songs That Fit.”

“The products have to stand on their own,” said Rochelle Schmieder. “I have no interest in being in fashion if it’s not music-related.”

Lyric Culture, a premium brand that mines the songs of The Beatles, Rolling Stones, Kiss and Michael Jackson, is sold at Nordstrom, Bloomingdale’s and small boutiques. Jewelry ranges in price from $36 to $95 and tops are $40 to $50. Lyrix, a line for teenage girls, is available at Claire’s and features the lyrics of teen sensations Miranda Cosgrove, Miley Cyrus and Willow Smith. The newest venture, Lyric Nation, in July will launch in 1,500 to 2,000 Wal-Mart stores. Products will incorporate words from country hits and faith music. “We try to find songs that match the retailer,” Rochelle Schmieder said.

Lyric Nation’s 40 different styles include key rings with Willie Nelson’s “Mama Don’t Let Your Babies Grow Up to be Cowboys” and “Shout Out to the Lord,” a popular worship anthem, and Nancy Sinatra’s “These Boots Were Made for Walkin’” on a necklace. Lyric Nation jewelry will retail for $4 to $7 at Wal-Mart. It will be merchandised in a four-foot section of the accessories area, said Rochelle Schmieder, adding, “This is not a conflict. I’d never do the same songs for Nordstrom and Wal-Mart.

“This is really my calling,” she said. “This blending of fashion and music.”