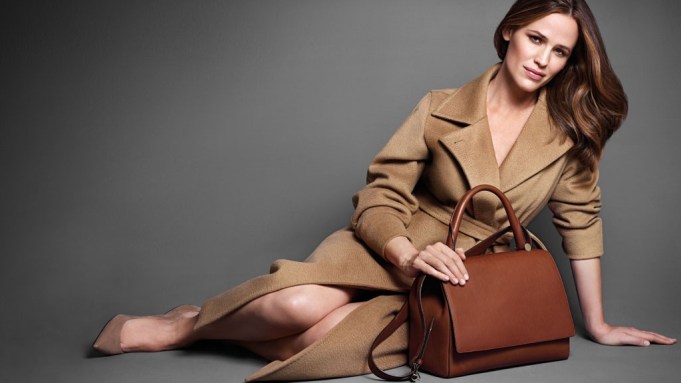 MILAN — Max Mara is accelerating its investment in the handbag category, launching the JBag, and has tapped Hollywood A-lister Jennifer Garner to front its first advertising campaign in the arena.

This is the first time that Max Mara has associated its products with a celebrity and the first time Garner has been the face of a fashion brand. The project confirms a WWD report in April.

“Jennifer Garner is a real woman, not a cover girl, not a starlet, and she has different interests, a family and values,” said chairman Luigi Maramotti in an exclusive interview. “She is a real woman and embodies the Max Mara woman, she perfectly reflects our image.”

Garner, who is married to actor and director Ben Affleck and is a mother of three, has several sophisticated red-carpet appearances under her belt, which have made her a favorite for many designers to dress. “Max Mara is perfect for my lifestyle,” she said. “The brand possesses a classic, timeless elegance and a quality of craftsmanship that is luxe and yet so easy to wear. And the cashmere coat is delicious,” mused Garner, referring to the Italian fashion brand’s staple, which she dons in the images.

“The claim is: Timeless is now,” said Giorgio Guidotti, worldwide president of public relations and communications for Max Mara Group. “A timeless woman, and she is wrapped in a timeless cashmere camel coat. We were looking for a way to underscore that the world of Max Mara is not only coats, but now also accessories.”

Garner was photographed in May in New York by the group’s longtime go-to lensman, Mario Sorrenti, in his studio. There are five images — three for fall 2013 and two for spring 2014.

The campaign will make its debut in September in magazines such as Vogue, Harper’s Bazaar, Elle, W, InStyle and WSJ. Magazine, and in The New York Times and the International Herald Tribune. Guidotti said the company has upped its communications budget by more than 10 percent.

Max Mara will be holding a dinner event on Thursday in New York with Garner, Sorrenti, Maramotti, and Maria Giulia Prezioso Maramotti, retail manager U.S. market. The New York boutique will dedicate a window to the JBag starting that night.

Maramotti is not improvising with his plans and has quietly invested in building the group’s accessories division for years. The company took control of leather goods manufacturing firms, in Tuscany for bags and in the Veneto region for shoes, about 10 years ago. “This was a more marginal context until 15 years ago, and we wanted to better understand the sector, as it is a complex and specialized business,” said Maramotti. “Now we are ready to accelerate.”

Max Mara is tapping into a lucrative segment. The luxury goods market is expected to grow 4 to 5 percent globally in 2013 and 5 to 6 percent on a yearly average through 2015, according to consultancy Bain & Co., and despite some recovery of spending on apparel, the main drivers remain leather goods and other accessories, especially absolute luxury items.

At Max Mara, accessories have been growing about 20 percent on a yearly basis, said Maramotti. He also pointed to travel retail as gaining traction. “At our boutique in the Beijing airport, 50 percent of sales derive from accessories,” he noted. “Even more than ready-to-wear, they are an object of desire.”

With a Sixties inspiration, the JBag is functional and features sophisticated hides and handcrafted details such as a new fastening mechanism and small metal cylinders that decorate the shoulder strap buckle and handle. It will be carried in Max Mara stores and retail at $1,390. The bag is available in smooth calfskin, ponyskin, ostrich and deer, and in different versions, including color-block, monocolor and animal print. Hues span from red to tan, covering all main winter colors. “Our stores are physically evolving as more room is devoted to the accessories category,” noted Maramotti.

Maramotti, who heads a group that counts 5,500 employees, defined 2013 as chiaroscuro, with a weaker Italy compared with the growing markets of Russia and the U.S., which he called “central” for Max Mara.