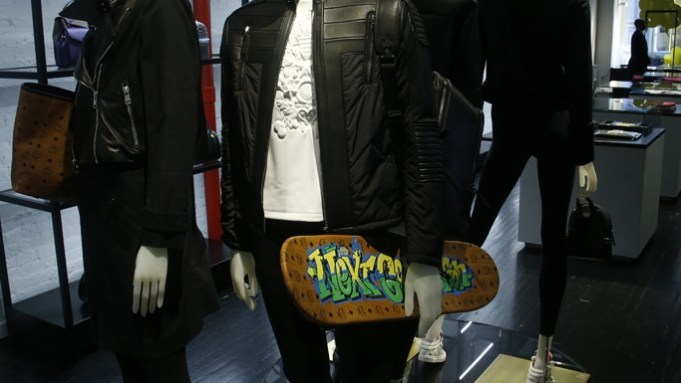 A re-branded and relaunched MCM wants to be a mega brand of the one-tens.

To achieve that lofty goal, the company will have to reestablish itself in the U.S., where it had a foothold in the Eighties, but saw its business falter as consumer preferences shifted to less overt signs of luxury.

MCM has started to take some steps, including recently opening its first U.S. flagship, a 4,000-square-foot unit at 100 Greene Street in Manhattan’s SoHo and launching on Feb. 10 the company’s first e-commerce site, a precursor to a larger global rollout the company’s planning. MCM’s existing Web site is not transactional.

“We want to launch the e-commerce business in the most competitive market in the world,” said Paolo Fontanelli, international chief executive officer of MCM. “That’s why we’re starting in the U.S. We’ll learn from this experience and then [go] to other parts of the world. There will also be  sites in Asia and Europe.”

Patrick Valeo III, MCM’s president, said, “America is crucial this year. We’re planning aggressive growth for the future. We’re going to roll out more U.S. stores in the spring. We’ll also have a big focus on South America, where we have a great following. We do great business in Canada at Holt Renfrew and we’ll open our own stores there.”

Valeo said MCM is close to signing leases in Las Vegas at resorts such as the Wynn, the Forum Shops at Caesar’s Palace and CityCenter. Sites are also being sought in Los Angeles, San Francisco, Chicago, Houston, Honolulu and Miami and Bal Harbour, Fla. as well as Brazil, Mexico and the Caribbean. A small shop has been operating at the Plaza Hotel in Manhattan for six years.

The company is also trying to rekindle its relationships with American retailers, including Neiman Marcus and Bergdorf Goodman, which sell the brand online. Valeo said sales volume at Bloomingdale’s is growing. And at the retailer’s 59th Street flagship, MCM is moving from the balcony to more prestigious shop-in-shops for men and women on the main floor. MCM is also expanding its first floor presence at Saks Fifth Avenue.

“We’ll do exclusive products for some of our partners and we won’t over distribute,” Valeo said, referring to the glut of MCM products in the Eighties that flooded the market and lead to counterfeits that hurt the brand’s image.

MCM has been partnering with everyone from Big-O, the notorious artist and director of Japanese hip-hop label Phenomenon, to German artist Stefan Strumbel, whose work is a mash-up of cuckoo clocks, masks, crucifixes and street and pop art references. Future collaborations with Beats by Dr. Dre, Ekocycle and Tobias Rehberger are designed to set MCM apart from what Fontanelli called “the more staid competition. We have the ambition to become the new school of luxury, not the old and boring school of luxury. Our DNA is to be fun and different than all the others.”

MCM, which stands for Mode Creation Munich, has introduced a diverse assortment of new collections, both understated and edgy, in an effort to attract shoppers who prefer not to wear their luxury branding on their handbags, accessories and luggage — a major change in strategy from its Eighties heyday, when the MCM logo was plastered over everything. “The more evolved consumer is getting away from the very visible logo,” said Fontanelli said. “For very sophisticated consumers, you need another collection.”

Not that the company is ready to part with its famous Cognac Visetos all-over MCM logo, laurel and diamond pattern, a least not just yet. “We sell the heritage part of the collection pretty well, but that’s not enough,” Fontanelli said. A line designed by a Tuscany-based team and featuring Italian leather provides the made in Italy provenance that “can really give MCM credibility at the luxury level,” Fontanelli said. “Today, we feel we have a product that’s more fun and more adequate for the young consumer’s needs.”

Despite its setbacks, MCM is still a powerhouse with $500 million in global sales, most of which is done in Asia. MCM is the second-biggest airport brand in Korea, an important duty-free market, and the company aspires to overtake Cartier to be number one. The company is nothing if not tenacious — after falling from grace two decades ago, it’s preparing to celebrate its 40th anniversary in 2016. A coffee table book published for the occasion will feature the brand’s blingy beginning and sophisticated new style. The company is courting a diverse customer base of fashion girls, celebrities and soccer moms with a modern sensibility visible in a Goyard-esque collection of handbags, shoppers, knapsacks and crossbodies decorated with geometric diamond graphics in searing block colors. A “red carpet” collection of backpacks, evening bags and clutches boldly encrusted with Swarovski crystals is priced from $2,100 to $2,975, while Strumbel’s products emblazoned with the legend, “Heimat [Homeland] Loves You!” and embroidered with a Day-Glo emblem, $650 to $2,100.

The company’s entry into ready-to-wear consists mostly of leather and shearling coats, jackets and vests and jeans, but Valeo said, “there are many other segments we could get into. With rtw, we’re just scratching the surface.”

Black painted wood floors, black mirrors and hot rolled steel give the SoHo flagship an industrial vibe that’s punctuated by Strumbel’s stylized Bavarian clock and neon crosses. The heritage merchandise is relegated to the lower level, which has a more traditional decor.

“Even today, you have a logo-driven consumer,” Fontanelli said, but clearly, the emphasis is on less dominant logo displays. It remains to be seen whether younger consumers will gravitate toward MCM, which helped establish the trend for conspicuous logos on luxury products. “There’s always a cycle,” Valeo said, referring to the ebb and flow of demand for demonstrative brand signifiers.