Mipel Closes in Milan on an Upbeat Note

Sustainability was a key theme at the leather goods trade show.

MILAN — The sustainability trend was front and center at Mipel, the handbags and accessories trade show organized by Assopellettieri, the Italian leather goods manufacturers association. To wit, a vegan brand won the Best Revelation Brand award for the Scenario area — a clear sign that things are changing.

The 116th edition of the trade show, held from Sept. 15 to 18 at the Milano-Rho fairgrounds, had vowed to speed up on sustainability and green commitment and several special projects hinging on this theme were launched to raise awareness among industry, buyers and consumers.

Under the lead of Franco Gabbrielli, recently appointed new president of Assopellettieri in June 2019, the trade show registered an encouraging 19 percent uptick in visitors compared with the same period in 2018. In comparison, Mipel’s February edition grew just around 7 percent compared to September 2018.

Regarding the local market, positive signs of recovery already seen in September 2018, and February this year, were confirmed by a 12.4 percent uptick of Italian visitors.

“We have closed an exceptional edition, which — apart from the numbers — has garnered the satisfaction of exhibitors and buyers, the aspect that interests me the most,” enthused Gabbrielli. Pledging to further engage for the future, he said he had “clear ideas: fashion is innovation, courage and a touch of ruthlessness. I like to amaze.”

This upbeat stance follows a lackluster first half. Figures released by Assopellettieri for the first six months of the year show an even more marked contraction in local spending, down 4.8 percent in quantity and 3.1 percent in value.

Exports grew 27.5 percent in value but a modest 3.1 percent in volume. This discrepancy was attributed to the further increase in the level of quality of Italian production and, above all, of the increasingly important role carried out by the big international luxury brands.

Switzerland — traditionally one of the strongest import markets as it serves as a European logistics hub — tops the raking with a boost of 112.7 percent in value and 14.2 percent in quantity in the first five months of the year, but, as Switzerland represents 38.5 percent of the total exports in value, the rest of the markets reported just a 2 percent uptick in value and 1.6 percent in volume.

Russia, another important export destination, showed some alarming numbers registering a 24.5 percent contraction in value and 28.4 percent in volume; while Germany recorded a 10.1 percent decrease in volume and only 0.7 percent rise in value. The Middle East markets represented by Saudi Arabia and Arab Emirates also showed a drop in numbers, while the U.S., China and South Korea were all up above 10 percent.

This data reveals a serious concern in the leather goods sector specially regarding small and medium-sized companies, which, according to the information released by Infocamere—Movimprese, the quarterly statistical analysis of the birth-mortality rate of companies, in the December 2018-June 2019 period, a total of 78 manufacturers closed down.

The fair listed more than 350 brands, which presented their spring 2020 collections.

Alkeme Atelier, a New York-based newly born vegan brand, won the Best Revelation Brand award as part of the Scenario section of the fair. Beppe Angiolini, fashion buyer and councilor of Camera Buyer Italia, who was in charge of the selection of the winner among the new designers said he was particularly “surprised by the products’ innovation and creative freshness, from the high design models to those in recyclable and eco-sustainable materials, which is an increasingly important topic in the sector.” 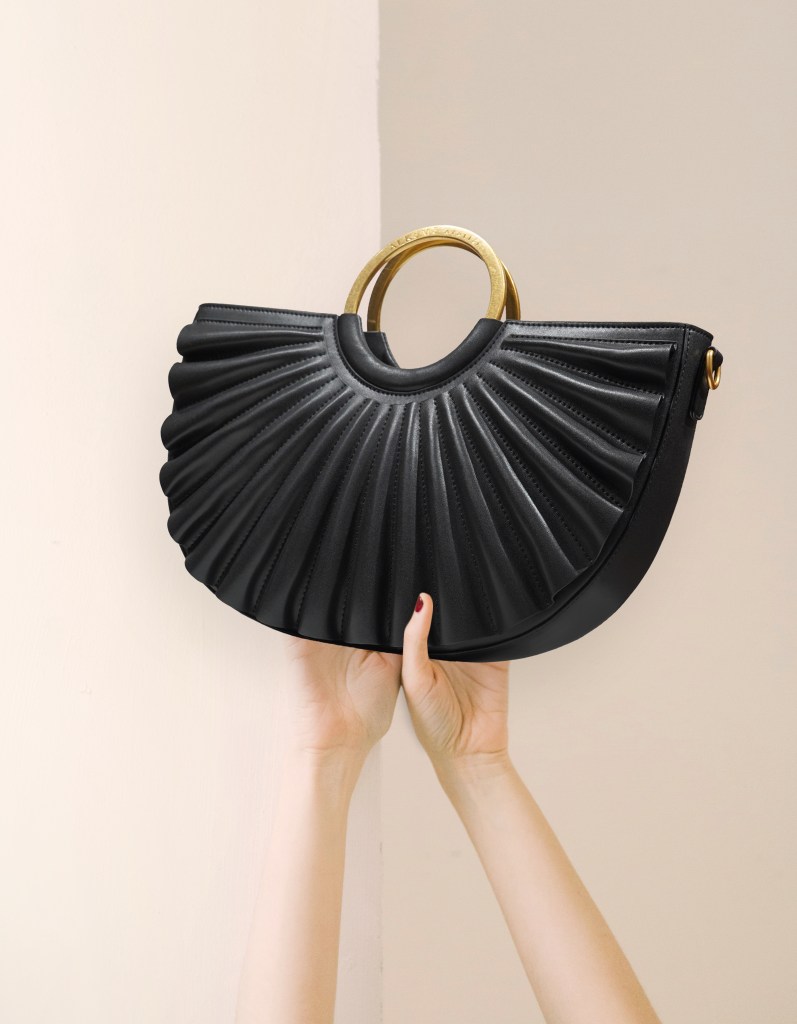 With low environmental impact and high social responsibility, Alkeme Atelier has developed in-house technology to create handbags made of a combination of Piñatex, a natural textile made from pineapple leafs and a vegan fiber made of 70 percent of recycled materials. Also the inside linings of the pieces are 100 percent recycled, created out of discarded plastic bottles.

Asked about participating at a leather goods fair, Shelly Varma, founder and designer of the brand explained that “it’s not difficult at all, it’s just that people are not aware of the possibility to use vegan materials, because I think big brands have not implemented this as much as they should, but people are very interested.” Varma also added that “I’ve had people from the fair, which are big brands, and they’ve come, they want to do my stuff, like they want me to make it for them.”

Long-lasting and lighter than leather, water-resistant, scratch-resistant and antibacterial, the products are designed in the U.S., produced between China and India with materials coming from Spain. The pieces with clean, neat lines are inspired in the alchemy of the elements of the earth and feature geometrical structures. At the moment they can be pre-ordered online and from February they will be available in the U.S. At Mipel for the first time, the aim is to capture the European market.

Also in the Scenario area, and as part of the Signature project, which gathers Made in Italy brands with a particular storytelling and uniqueness, Lara Bellini presented its spring collection. Starting off as an architecture and design studio, five years ago the decision was made to jump into the fashion world.

The brand presents classical models with a touch of geometry and clean cuts, mixing colors starting from a dim palette with splashes of bright contrasting colors.

With a soft presence in the local market, the brand is actually aiming to develop foreign markets, where it has so far been well-received, mostly in Asia and America. Since last year, the brand can be purchased online globally at the Florence-based platform Forzieri.com. 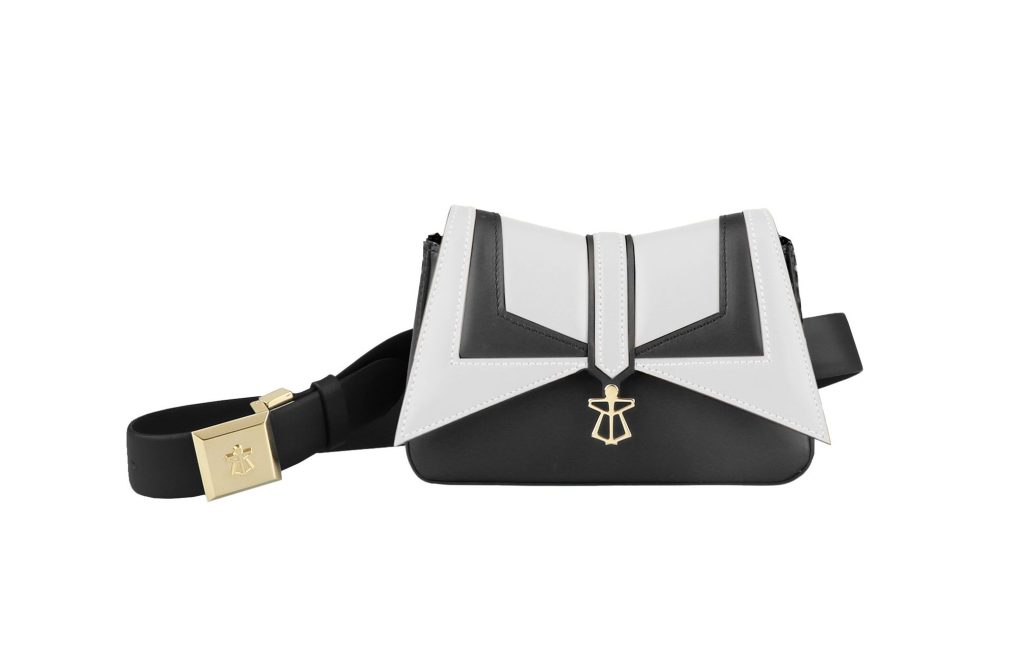 “In the last year, we’ve started to do some research about these new sustainable materials because we also want to enter in the sustainable world, and I discovered that some of these materials are much more expensive than the leather,” designer Lara Bellini explained. “For me, sustainable wouldn’t mean to create a not so nice design that costs a little bit less, but, in fact, I want it to be even more expensive because, from an ethic standpoint, it should be the life motto of who buys it, showing a compromise to this sustainable path.” The brand plans to launch trial sustainable capsule collections next season.

For Bric’s, the storied luggage and leather goods company, the sustainability issue is addressed from another angle: making quality products that last longer, with easily replaceable spare parts. “For the luggage industry the [sustainability] issue becomes a little bit more complex because we obviously need to use more materials; for a handbag, for example, you just need soft materials so maybe it’s easier, but to produce luggage instead, we need to use other materials, rigid components, plastic components, some little steel components, as well as fabrics and vegetable tanned leather,” explained the firm’s president Roberto Briccola.

Briccola was very upbeat about future, with margins growing on stable revenues of 40 million euros, and additional market potential. “The air traffic business is booming as far as the business and first class segments are concerned, the numbers are tremendous, so this clearly favors the luggage companies that produce high-quality products,” Briccola said, adding that as the company’s direct competitors are moving towards alternative target audiences, there is room for growth. 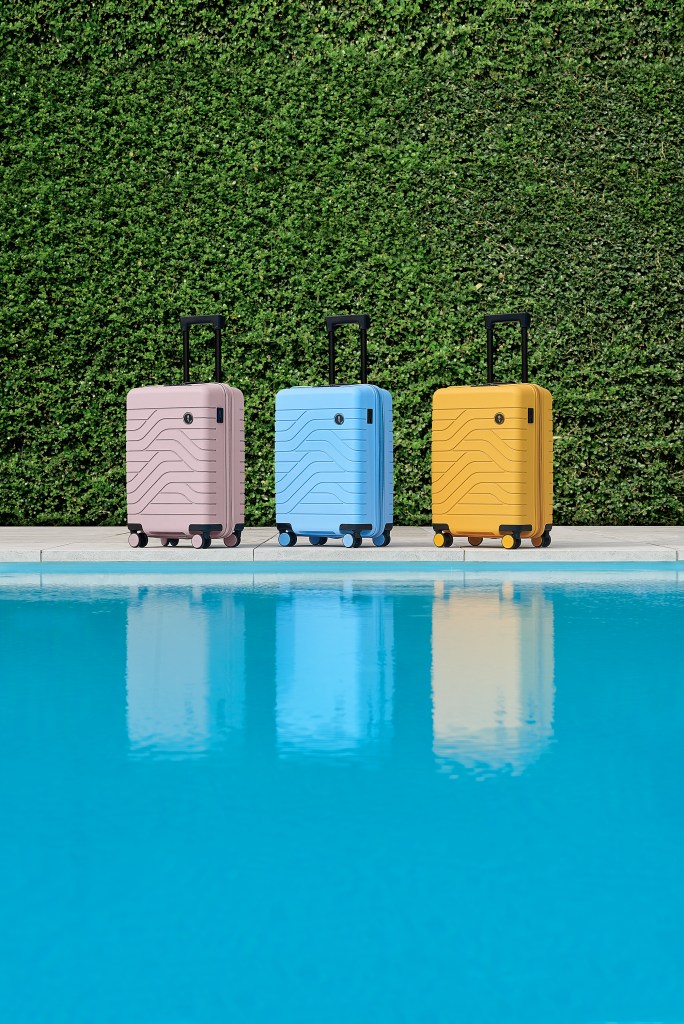 Presenting the brand’s traditional lines, as well as the sister brand BY — which stands for Be Young — introduced in the company’s portfolio for spring 2019, all the items aim to reflect the four key words of the company: tradition, innovation, elegance and functionality. With distinctive designs, highly functional suitcases in rigid and soft versions equipped with a USB recharger to meet the traveling and working needs, Bric’s consolidates itself in the upper contemporary segment.

Mipel’s next edition will take place from Feb. 16 to 19 at the Milano-Rho fairgrounds.