A return to retro and classic styles was a notable bag trend at the leather goods and accessories fair. 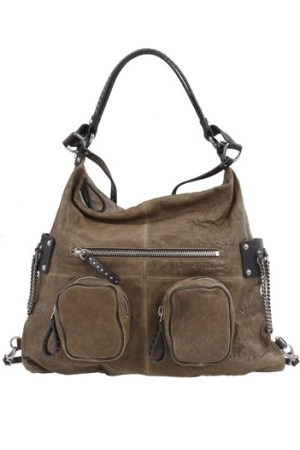 MILAN — The 99th edition of international leather goods and accessories fair Mipel saw an uptick in order writing as stores continued to rebound from the recession and international markets regrouped.

The four-day exhibition here, which ended March 9, featuring fall collections from Italian manufacturers, was buoyed by a 7.9 percent upswing in attendance, compared with a year earlier, to 17,440, with 4.8 percent more foreign buyers, notably from Russia.

“Last year, we closed the exhibitions with a healthy recovery in numbers,” said Mauro Muzzolon, general director of Mipel and Aimpes, the industry association that organizes the show. “The two years prior to that were difficult. But we’re seeing the recovery coming at a rapid pace, and more than just having the concrete numbers to reflect the expansion of visitors and buyers, we’ve noticed a re-acceleration of a market that wants to spend money.”

A marked return to retro and classic styles was a notable bag trend. Many bags had been worked over with fringes, studs, zippers and appliqués, as seen in the trendier lines from Tosca Blu. The return of fur was seen in brands such as Capoverso. Many lines mixed fur with leather, and leopard and ocelot prints were abundant.

Aside from the usual fall earthy color palette staples such as dark chocolate, mahogany and walnut, bags featured pops of color in warmer hues like cabernet, plum and burgundy.

Italian brand Braccialini presented a diverse line of leather goods, including handbags, key chains and wallets, in its idiosyncratic patchwork style with playful designs evocative of the woods. Honorary president, founder and designer of the label, Carla Cecconi Braccialini, said the past year had been strong.

“The one market that has been uncertain lately is the American market,” Braccialini said. “It’s significant because America was the first to accept new trends and new things, but now it’s slowed down a bit.”

David & Scotti continue to capitalize on a growing Asian market presence, as its bags have already been stocked in department stores in Japan and South Korea. Hong Kong’s Sogo department store is the next destination, and from there it’s moving forward with retail space in Bali.

“We want to arrive to our next fair in September in good health, since it’s our 100th edition of Mipel and that makes us especially proud, since we’re one of the oldest fairs in the world,” Muzzolon added.