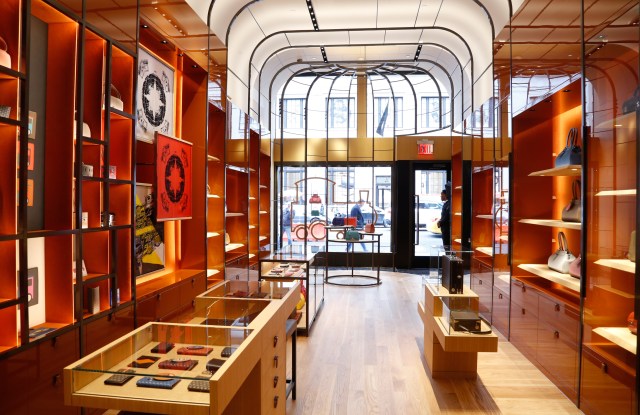 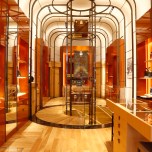 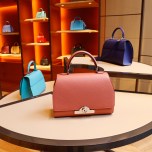 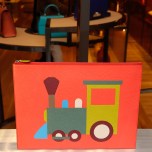 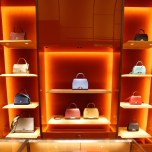 Moynat has opened its first New York boutique within the refurbished Whitney Brownstones complex, on the same block as the newly ordained MET Breuer building.

The 937 Madison Avenue store — Moynat’s first freestanding unit in the Americas — occupies 2,150 square feet across two floors. As with all of Moynat boutiques, its interiors are designed by Gwenaël Nicolas, the director of Tokyo-based architectural and design firm, Curiosity.

Awash in tonal colors, the store is decked with warm cedar shelving. A cathedral-inspired iron ceiling installation ensconces the space, and a cylindrical glass centrifuge acts as an artful display case for archival Moynat trunks from centuries past.

Moynat creative director Ramesh Nair, in town to christen the new space, told WWD that the brand has quickly amassed a loyal contingency of, “People looking for something different, something new — discoverists. These are people who have fantastic taste, they see something they really like and buy it and are seduced by not only the design, but also the heritage.”

Moynat, founded in 1849 as a luxury trunk company, was purchased by Groupe Arnault in 2010 and opened its first boutique in Paris in 2011.

The house is still working to iron out its production flow — slowly recruiting skilled artisans to craft its bags. Moynat presently employs approximately 30 artisans, spread between Paris and Burgundy, who produce between 1,000 and 1,500 bags per year.

Unlike other leather goods labels, Nair says Moynat’s output is not purposefully limited as a ploy to incite a hard-to-get craze.

“I don’t like the word scarcity — luxury is not about scarcity, luxury is never about trying to hold back, it’s about being generous. Holding back doesn’t make sense, you’d rather people have it.

“But there is also not a chance for overcapacity; if its true luxury, [oversaturation] is not possible,” he said, citing a shortage of fine tanneries and skilled leather goods artisans in France as contributing factors to Moynat’s modest emissions.

That said, Nair still projects that the brand will scale upwards with time. “It’s a no-win situation. On one hand you have to grow a little bit, at some point the investments being done have to make sure it is working. To get a better product, to continue being the best, you need to expand. You cannot stay as two-man artisan shop. You have to have a bit of growth but make sure the growth never goes against your values.”

Nair said the company’s gradual production increases would dictate freestanding boutique openings in the future — with New York, the label presently operates eight units worldwide. The label made its foray into the New York market in 2014, with a shop-in-shop at Dover Street Market. This retail partnership will continue to run in tandem with the Madison Avenue store.

Nair, well-seasoned in the Paris design scene (he joined Moynat from Hermès), also took time to opine on the recent high turnover of luxury creative directors, which continued last week when it was announced that Hedi Slimane had departed Saint Laurent following a mere four-year stint.

“I find the whole thing ridiculous none of these houses came up overnight. Monsieur Saint Laurent and Monsieur Dior, they toiled for years to build up [their brands]. I always think a designer’s ego should never overpower brand,” he said, speaking generally about the shift in industry mentality.

“They don’t realize you are never going to have a long-term base, maybe the new business is all about short term gains, but you cannot build luxury with short term gains.

“I think it has to do with the demands of the market. You know, you don’t have to give the market what it needs always, you have to make the market want what you make. I think young designers forget that sometimes.”