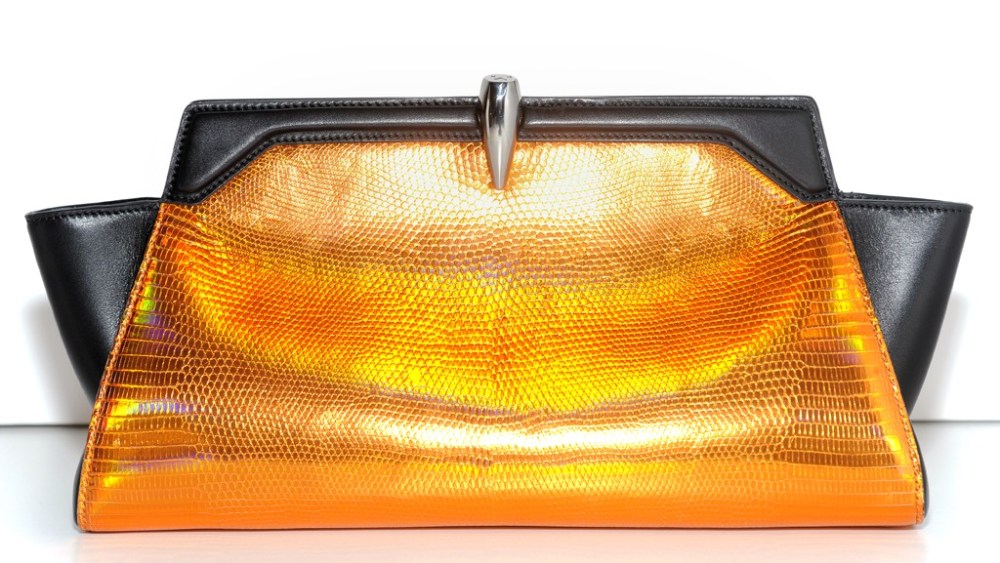 Such a design could spring only from the mind of Nicola Formichetti, creative director of the Mugler fashion house and stylist to one of pop music’s most outrageous fashion plates.

At the Mugler fashion show here on Wednesday night, Formichetti is to unveil his first leather goods for the French house, thrusting the brand into a burgeoning and lucrative category.

Spanning about 30 models, the debut collection includes structured, ladylike day bags, weaponlike evening clutches and an “easy and cool sports line,” according to Formichetti, who slots the style based on Gaga’s assets in the latter category. “She doesn’t know yet,” he demurred in a recent interview.

Formichetti also confessed he’s an unlikely leather goods designer, nonplussed and mystified by the handbag craze that has gripped the industry for years. Answering demand from Mugler’s ready-to-wear clients — and women in the fast-moving digital and pop culture universes he orbits — he took the plunge.

“Now I’m completely obsessed,” he confessed. “You can really tell a lot about people from their bags.”

Formichetti noted he had little archive material upon which to draw. The few “vanity cases” created by house founder Thierry Mugler were designed for the runway only.

“It’s a little dangerous feeling, but I didn’t want to go too far out with designs — yet,” Formichetti said with a conspiratorial laugh. “It has a little bit of a punk rock feeling, but it’s still quite chic.”

Shapes include an elongated vanity case called Agent 10 and an aerodynamic Naboo clutch in metallic lizard skin. Retail prices are to range from about 700 euros to 1,200 euros, or $900 to $1,550 at current exchange rates.

“It’s so cute, I would totally wear this,” Formichetti said, slinging a small postman style over his head and positioning it on his hip. “I want that size and I want to graffiti everything.”

Formichetti characterized the bag venture as another signpost of maturity for the brand, which stormed onto the fashion scene with tattooed zombie models, a turn by Gaga on the catwalks and an online onslaught.

“The first year I wanted to scream and tell everyone ‘we’re here’ with the digital,” he said, alluding to studio cams, crowd sourcing, live-streaming and such. “Now we want everyone to look at the clothes and wear them because they’re f—ing amazing!”

Next up: Formichetti plans to introduce a range of leather goods for men.