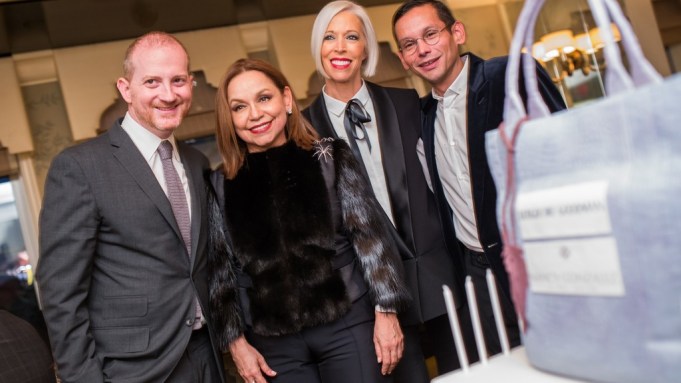 What a difference 15 years makes.

Founded in 1998, Nancy Gonzalez began as a small, family-run Colombian handbag brand, specializing in exotic skins. The designer, for whom the company is named, drew inspiration from her native country, and her collection attracted the attention of buyers from Bergdorf Goodman. Soon enough, they came knocking, and inked a deal with Gonzalez.

Today, Gonzalez’s vibrant and meticulously crafted bags are one of the department store’s key accessories brands, and her collection is sold at more than 300 luxury retailers around the world, including Neiman Marcus, Saks Fifth Avenue, Harrods, Tsum, Lane Crawford and Net-a-porter.

On Wednesday night, Gonzalez and her son Santiago, who serves as brand president, feted 15 years working with Bergdorf’s. Held at the retailer’s BG restaurant here, the party included the store’s executives, staff and buyers, to name a few.

“I wanted to celebrate the anniversary with people who made the brand a success,” Santiago Gonzalez told WWD. “Genius is really being able to work with a group of people and collaborate correctly. I always get asked what is the success of Nancy Gonzalez? We are the number-three brand at Bergdorf, and it is in fact due to the collaboration with Bergdorf’s staff. Nancy Gonzalez has been a collaboration with the salespeople, the stock team.”

“The customers,” Gonzalez said, interrupting her son. “Our first account started exactly 15 years ago with Bergdorf Goodman, then with Neiman Marcus. They are all like family.”

According to the mother-son duo, the handbag brand has grown into a “multimillion-dollar” brand and an important player in the global accessories market.

While Santiago declined to provide sales figures — “it’s bad luck, ” he offered — the company is focusing on opening boutiques in Asia. With a global footprint that mainly consists of shops-in-shop, the brand has begun expanding its own boutiques, primarily in Hong Kong and Korea. But the label is looking at stand-alone stores in those regions, and according to Santiago, he’s beginning to consider other markets, including the U.S.

Part of the company’s success is linked to its highly technical knowledge of how to use exotic skins. Gonzalez uses crocodile to simulate hand-woven wicker, for example, while also manipulating the texture of the skins.

“We can do anything with a crocodile skin,” Santiago said, while showcasing a cobalt crocodile tote with a colorful parrot charm made from crocodile skins.

“Even his eyes are made from crocodile skin,” Santiago said, gesticulating. “No one in humanity can do this.”

With a constant stream of designs — 150 new styles per season to be exact — Gonzalez said she is preoccupied with her work.

“I’m thinking about it all day long,” she said, explaining that art and nature have been major sources of inspiration for her work. “I travel a lot, but I want to enjoy life.”

Although the designer has no desire to slow down, she underscored that she also has no intention of selling her business, which is “growing steadily.”

A pensive Santiago paused for the first time before speaking.

“Everything is for sale,” he said.

“Everything is for sale at the right moment,” he said with a grin.