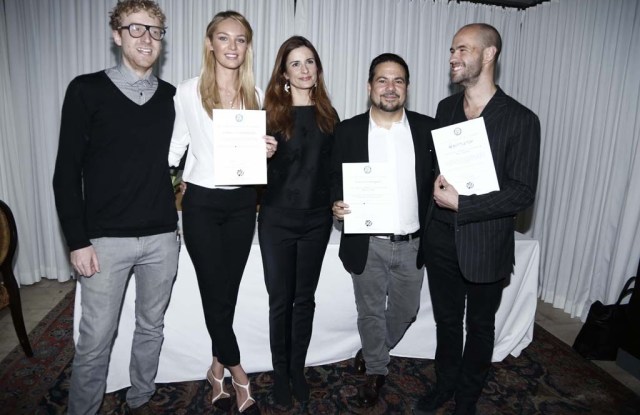 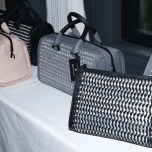 NEW YORK — An eclectic group gathered in the penthouse of the NoMad Hotel on Thursday morning. Present in front of the room were Livia Firth, Narciso Rodriguez and Candice Swanepoel. The trio was joined by Cameron Saul and Oliver Wayman of The Bottletop Foundation and Brad Jakeman, president of PepsiCo Global Beverages Group, as Firth presented the official Green Carpet Challenge Brandmark to Rodriguez’s line of sustainable handbags for Bottletop x Pepsi.

The collection, now in its second season, uses Amazon Basin-friendly leather and recycled aluminum pull tabs in its designs, and is handcrafted by local women at the Bottletop atelier in Brazil. Swanepoel serves as the face of the collaboration, with Pepsi providing financial support to expand the Bottletop team, as well as contributing toward health insurance for women working in the atelier. The teaming of Rodriguez and Bottletop was initiated by an unlikely source — actress Jessica Alba. “She’s a mutual friend,” said Saul, whose father is Mulberry founder Roger Saul. “She said, ‘I think Narciso would be blown away by this and you guys would get along really well.’ It turned out that his home in Brazil was a few hours away from our atelier. It was kind of a no-brainer moment.”

Just less than two years later, the pairing is unveiling its fall offerings, which employ a braiding technique that blends upcycled metal with leather. The collection also includes several new styles, such as envelope clutches made to double as iPad cases. “We wanted to create something substantially different,” said Rodriguez. “I took ideas we were working on [at Narciso Rodriguez] and married it to what Bottletop already had.”

Carrying an all-black style from the spring collection, Firth had her sights set on a burnt orange design for fall. “I want it,” she said, eying the iPad case. “I saw the bags for the first time in December. I was like, ‘Can I have one?’ I’m used to the Bottletop design, but I’ve never seen it done covered in leather. It blew my mind.”

Firth, a fan of Bottletop since its inception in 2002, was pleased to recognize the collaboration’s dedication to ethical fashion. “It’s the future of fashion,” she said of the sustainable focus. “Look at what happened in Rana Plaza last year with the factory collapsing. What it shows beyond any doubt is how distant the brands and the consumer are from the people who actually produce the products. This project proves that that connection is so important, and also that you can achieve amazing products and be in a profitable business by valuing the lives of the people — in this case, women — who make the products for your brand. It’s so important.”

The fall collection is available exclusively at Isetan in Japan, Holt Renfrew in Canada, Harrods in London, Mares in Brazil and Jeffrey in the U.S. Prices range from $695 to $2,000.