The rising French brand by Vincent Ribat has landed a suite of blue-chip retailers for its refined fabric bags, largely priced at under 200 euro. 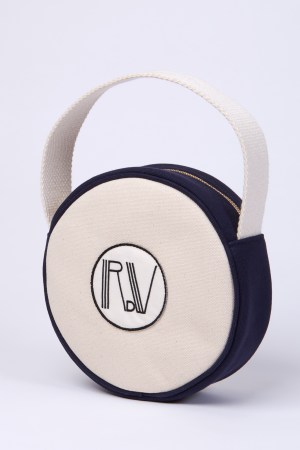 Well-designed bags need not be made of leather, according to rising French label Rue de Verneuil — which hopes to write a new handbag paradigm with refined styles made from fabric.

The brand, which was founded in 2014 by Vincent Ribat, has quickly amassed a roster of major stockists for its assortment of cloth bags largely priced at under 200 euros, or $226 at current exchange.

The brand, named for the Saint-Germain-des-Prés street on which Ribat operates a studio, offers men’s and women’s totes, bags, pouches and duffles. Its designs stem from a coterie of influences: Bauhaus curvature, Deco type font, Mod tennis whites and Riviera rayures among them.

This referential mélange is applied to streamlined, preppy-leaning silhouettes, including diminutive handheld totes, a cylindrical rucksack and the women’s range’s seminal “Romy” bucket shape. Spring styles are fabricated in pastel oxford cloth and ecru canvas, many of them affixed with the brand’s architectural “RDV” monogram patch. For fall, the same archetypal styles will be produced in gray, camel and houndstooth wool flannels in an ode to classic English haberdashery, accented with spurts of pastel, primary canvases and bits of tanned leather. Most styles can be personalized with embroidered initials for a nominal fee.

The label — crafted by hand in a Paris-based atelier — counts Colette, Dover Street Market London and Lane Crawford as stockists and says its sales have grown by 600 percent in the last year.

Ribat, an interior architect who started the brand after stopping his work on a men’s wear coventure called Vanities, summarized his philosophy as “a return to the essentials, with a simple and elegant line, something nonconformist. Something that is quite luxury but that you can buy, with positioning in very selective stores.”

The line’s trim proportions were intentionally developed for success in Asia — a consumer market that appreciates petite designs of European provenance. Rue de Verneuil generates a majority of its business in the region, particularly Japan — where it’s sold at stores including United Arrows, Journal Standard and Urban Research.

Ribat expected the more-conservative French market to balk at bags made of fabric, in the interest of adhering to the tradition of leather carryalls. But he has been surprised by a reaction that’s proved quite the opposite, with stores including Merci and Le Bon Marché buying into the label. “It’s not very common in France to have bags made of fabric; I wasn’t sure that this kind of bag would be interesting [to French shoppers]. I think too many French people [now] are fed up with ‘It’ bags that you have for just one season,” he reasoned.

The U.S. market, he feels, is ripe territory for expansion for his line. “American shoppers are less constrained, are more open about different kinds of bags,” he said. The label presently retails a limited collaboration with Goop and will be stocked at Forty Five Ten and Dress in Boston for fall.

While Ribat intends to evolve Rue de Verneuil’s voice, he plans to keep the label focused on fabric bags and travel accessories. He is exploring the possibility of opening a freestanding store in Paris in mid-2017, “perhaps around the Palais Royale, where we’d see a mix of customers that are classic and trendy — it’s a good match for us,” he said.

Presently operating with a team of five, Ribat is seeking investment to assist in the brand’s expansion.