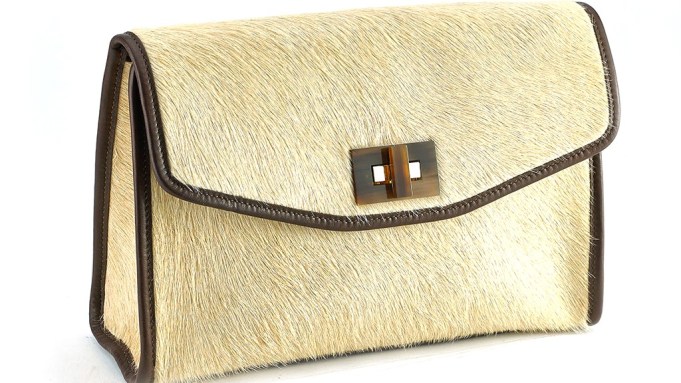 NEW YORK — Nina Griscom is unveiling another facet to her career — handbag designer.

“I have been a customer of Graphic Image and GiGi New York,” Griscom recalled Thursday. “I ran into their booth at The Hampton Classic a few years ago, and loved their things. I bought a bag or two to bring on safari to Africa, and some iPad cases.”

She was so impressed with the quality of the products, the range of exotic skins and the fact that all items were made in America that she approached the company’s executives to start her own line.

“I always had a hankering to do some bags, I love bags,” said Griscom. “We have been working for the last year on developing this, and finally we have product to sell now.”

Griscom — who has more bags in her own closet than she cares to admit — is quite clear about her handbag philosophy, which shows in the designs: “I am not interested in things with a whole lot of garbage on them, and I am certainly not interested in logos.”

For her part, “I like things that have great craftsmanship, and beautiful leather and materials. Today, I prefer to see the wonderful old crocodile envelope bag that I bought in Milan when I was 25 with my modeling money, and it holds up and has a great shape, and still looks modern.”

Griscom worked closely with GiGi New York designer Amanda Kinsley and her team on the designs. For example, the capsule lineup includes the Nina, a day clutch in American haircalf and contrast French calfskin, and the Elizabeth, an evening clutch in haircalf and soft French calfskin. Both are lined in suede and use natural horn elements for zippers and closures.

The bags, priced from $750 to $1,800, launched exclusively at the GiGi New York boutique on Jobs Lane in Southampton, N.Y. Friday, as well as at giginewyork.com (she will link to the site from ninagriscom.com). They will also be available at GiGi New York’s booth at The Hampton Classic horse show, which takes place Aug. 25 to Sept. 1.

“It’s a very small collection to start,” Griscom noted. “We are starting out gently to see the audience reaction.”

For Griscom, who once operated two boutiques selling mostly things for the home, handbags represent another opportunity to present her lifestyle philosophy. “I am very much hoping to grow the Nina Griscom division of GiGi New York into a much deeper line of product: handbags, but also accessories, leather jewelry, travel,” she said. “That’s my deepest hope.”