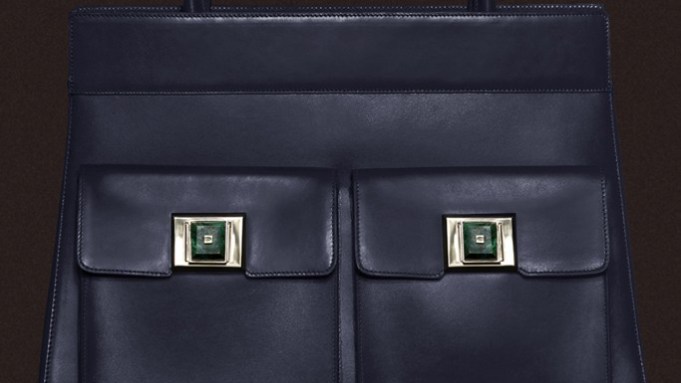 PARIS — Launching into handbags is a rite of passage three designers who show in Paris — Andrew Gn, Roland Mouret and Alexandre Vauthier — are taking this season.

Gn said he detects a move away from so-called “It” bags, leaving a gap for what he calls “investment pieces.”

After two years of research, the Paris-based designer is ready to launch his line on Sunday during his ready-to-wear show. “I took my time because I was really trying to understand the market,” he said. “All these fabulous women that are my customers, they can have everything they want, they probably already have 25 to 35 bags in every size and color [imaginable], so I asked myself: ‘What can I offer them?’”
The answer is surprisingly simple: “Function.”

Gn made lightness his mantra. “There is often so much hardware on bags, which makes them heavy. And it’s not even functional, it’s just there. So we have stripped everything away.”

Crafted from Italian box-calf leather in a classic palette of rust, cognac, violet, forest green, blue and black (the colors were developed in-house), the bag’s only hint towards Gn’s penchant for extravagance comes through the chains and locks, which are adorned with semiprecious stones such as tiger eyes, amethysts and turquoise.

Gn explained that he wants “to take the company to another level, make it grow, but not too rapidly. That’s why we will be adding only three to four new styles to the family each season.”

For London-based Mouret, adding bags was a question of maturity. “Designing leather goods pushes you to question your creativity and bags are the next level,” he explained. “[It is] the most important new category since I created the dress.”

The four styles entitled Le Sept and Paris-Paris (referencing two Paris nightclubs from the Eighties and Nineties), Monceau (named after the famous park in Paris), and Hugo (an homage to Victor Hugo) have “a heavy mix of French attitude” and “move easily from day to evening,” according to Mouret.

“The emphasis is on clean, essential shapes” and “materials that will last,” said the designer of his debut collection that sports calfskin, goatskin, stingray print kidskin and suede in deep, earthy colors ranging from taupe to clay, with touches of petrol blue, white and burgundy.

Vauthier, meanwhile, settled on one key purse with a DIY edge.

Boasting an adjustable chain by silversmith Goossens, the “(U)nfolder 7” bag can be folded into a clutch and a handbag or be stored flat like a sheet through a unique system of locks thought up by the Renato Corti workshop in Italy.

“I’m crazy about the mechanics of watchmaking and the art of haute jewelry, and so I’ve been waiting for someone to translate that into a bag,” explained the designer, adding that the purse was “all about saving space — in the closet or while traveling.”

Delivered in lambskin or crocodile leather in black, beige, red or white, the item retails for 2,450 euros, or $3,269 at current exchange, and is exclusively available at Le Bon Marché in Paris, Just One Eye in Los Angeles and Harvey Nichols in Hong Kong.

Two further styles are said to follow next winter.