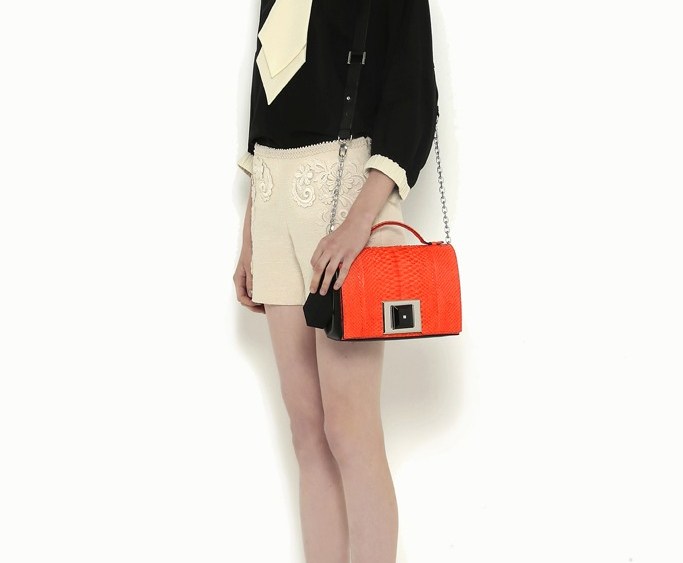 They may lack the advertising clout of a Gucci or a Louis Vuitton, but designers launching into the crowded handbag segment are turning their smaller size into a key selling point.

Roland Mouret, Andrew Gn and Alexandre Vauthier, who all show their collections in Paris, have joined the ranks of bag designers with collections that put the onus on exceptional craftsmanship and personal service.

For Mouret, meeting the customer is key.

“I think part of the price of a designer bag is that the designer can be there to sign it or be there with the customer when the customer chooses it,” said the London-based Frenchman, who regularly holds trunk shows for his collections.

“It’s my way to fight the big brands that base [more] on advertising, and less on a one-to-one relationship. I am fortunate to be closer to my customer and to be there to pass the message,” he added.

Mouret described his first collection, unveiled during Paris Fashion Week in March, as “a guilty pleasure” that he designed with friends in mind.

“It was really to understand how confident I am with it,” he said. “Launching something in our world nowadays is not a six-month situation. You take two years to launch a product properly. You have to go step by step.”

The four styles in stores this fall are named Le Sept, Paris-Paris, Monceau and Hugo.

“It was really about Paris. It was about my life when I was young, and that’s why it was great to give them names of something that is personal to me, and not to give them the names of celebrities or models,” Mouret explained.

In clean, timeless shapes, the bags are made in Italy and come in materials such as calfskin, goatskin and suede, with colors ranging from taupe and clay to petrol blue, emerald and burgundy.

Priced from $1,195 through $2,595, they are available from retailers including Hudson’s Bay department stores in Canada, Boutique 1 in Dubai, Boon The Shop in Seoul and the Roland Mouret boutique in Mayfair, London.

For his second collection, Mouret will expand his range to 12 styles and bring in some bags priced just under $1,000.

“I’ve got so much information from the customer that straightaway, I use it in my work, and that’s going to be part of the process with all the accessories, and the bags in particular,” he said.

Gn is also relying on personal feedback from his customers to refine his handbag collection.

“We always believe in testing the product with the end client,” said the Singapore-born designer, who greets customers at his private salon in an 18th-century townhouse in Paris when he is not hosting pop-up salons in San Francisco or China.

Known for his use of lavish fabrics and ornate embellishments, Gn took a different approach by putting the onus on functionality with his bags, which are characterized by streamlined silhouettes and multiple compartments.

“For me, it’s very easy to make a minaudière covered with crystals and jewelry and embroideries — we’re known for our embroideries. So I’m actually going to do something different that not a lot of people are doing: a day-into-night bag,” he said.

The Day ‘N’ Nite is one of four styles launching at retail this season, alongside the Cargo, the Duchess and the Pocket. For resort, Gn has added the Brief, and three other styles will be introduced for next spring.

“The name has to be simple and yet very catchy,” he said. “It is very important, because if it’s a good name, you will become a household name like the Birkin. A woman identifies more with a bag when she knows what it’s called.”

Made in France from Italian box-calf leather in a classic palette of rust, cognac, violet, forest green, blue and black, the bags feature chains and locks adorned with semiprecious stones such as tiger eyes, amethysts and turquoise.

“When it comes to handbags, a lot of people come in to buy a brand name because of the advertising and the marketing tools,” Gn noted. “We want to produce a very well-made product, beautifully designed, and let the product speak for itself. It’s always been our principle for our ready-to-wear.”

This will allow his existing customers to purchase multiple versions of the same bag in different colors, and a broader client base to buy into the brand, explained the designer.

Gn also hopes to grow accessories to 20 percent of his business in the next two to three years, but he is taking a gradual approach to retailing the line, available at a handful of stores including Neapolitan in Chicago and The Swank in Hong Kong.

“For the moment, we’re not dying to sell 25,000 or 30,000 bags in one style. It’s not our principle at all,” he said. “As you long as you can afford to do that and not to spread your products like wildfire, it gives you time to perfect your product line and to perfect the production as well, which is extremely important.”

Vauthier also said he was more concerned with quality than quantity.

The French designer broke into the category with the (U)nfolder7, which can be folded into a clutch and a handbag, or stored flat like a sheet, through a unique system of locks thought up by the Renato Corti workshop in Italy.

“It’s 80 percent handmade. I wanted something super exclusive,” he explained. “I wasn’t looking to make it an ‘It’ bag either. I really wanted to create a bag that would make it from season to season with new interpretations.”

Delivered in lambskin or crocodile leather in black, beige, red or white, the item retails for 2,450 euros, or $3,220 at current exchange, and is exclusively available at Le Bon Marché in Paris, Just One Eye in Los Angeles and Harvey Nichols in Hong Kong.

“It’s a fairly high price for a first bag from a designer who is not that well known,” acknowledged Vauthier. “But I really wanted it to be on the same level as my ready-to-wear. That is why we chose really exclusive points of sale.”

In the absence of any advertising budget, Vauthier — who has dressed celebrities such as Beyoncé, Rihanna and Rita Ora — has sent the bag to some of his celebrity friends, though he says it was more of a friendly gesture than a plea for a plug.

“I am not into product placement. I like to let things happen at their own speed,” he said.

“This is a product that I really want to work on long term. It’s my classic, and everything is going to revolve around that. I want to make perennial, high-quality items. That is what I want my label to be known for — hyper-luxury — because that is my true obsession.”