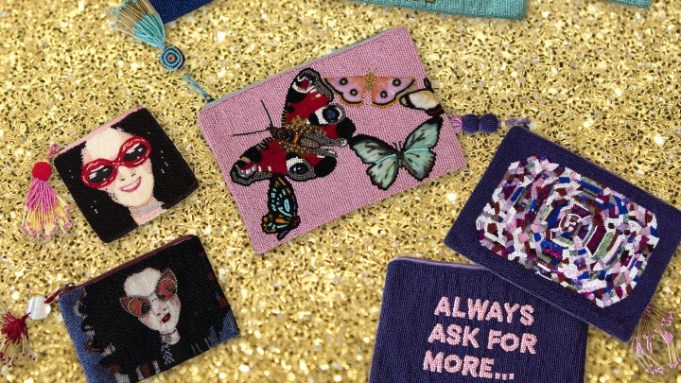 The artist, known for infusing Pop Art images and bold statements reflective of her own unabashed personality, is set to delve into accessories for the first time with a limited-edition, hand-beaded clutch collection launching Dec. 8.

“I love sparkle. I love a little jolt of color. Even when I’m packing and traveling, I’m sort of a hoarder of these little bags. It could be a clutch. It could be a makeup bag inside your Celine bag,” Longshore said. “I just wanted something that was fun and sassy and colorful and hand-beaded that represented the whimsy. A little punctuation point.”

The collection totals six styles with 100 bags produced for each design and retails for $185 to $450 — a steal for her art relative to her pieces that sell in the thousands of dollars.

They will be sold directly through Longshore’s web site and, as with her art, she’ll use Facebook and Instagram to link through to her online shop.

“I really like to test and use social media,” the artist said. “I’m such an advocate of artists using all these tools to self-represent to not have to go through galleries, to not have to pay these huge percentages [to galleries].”

She likens her bypassing of traditional gallery routes to much of what’s happening at retail with many brands going direct-to-consumer.

Her take charge way of doing it on her own has earned a loyal following, some of which includes celebrities such as Blake Lively, Salma Hayek, Lorraine Schwartz and Penelope Cruz.

The appetite for her work, especially at more attainable price points is strong. Last year she released a collection of 50 smaller, lower-priced paintings that were sold within 20 minutes of their release. She expects a similar reaction to the clutches once they go on sale. She’s tested responses with a couple posts on social media and said she’s had thousands of inquiries from people wanting to be placed on a VIP list to buy the bags.

“[It’s about] using the internet and not always collaborating,” Longshore said. “Not always having the product available, which is sort of the antithesis of American business because I feel like it’s more, more, more, where you see the globalization of these fashion brands where they end up competing with themselves. I really want to do the opposite of that.”

Even still, Longshore said her ultimate goal is to team up with what she described as “a really incredible fashion brand” in addition to potentially more launches on the accessories or apparel side. However, the concepts wouldn’t repeat themselves. That, she said, would run counter to the overall point of everything’s she’s built for herself and her brand thus far.

“My focus is taking my thoughts and ideas and making them come to life,” she said. “I want to keep things fresh so the idea of doing something like this every year wouldn’t be something I’d do. I want to make sure when people buy these that all of a sudden I’m not going to produce 1,000 more just to make money.”

In the past Longshore’s worked with the likes of Anthropologie, which is how she met her current business partner former Anthropologie global copresident, chief merchandising and design officer and head curator Wendy Wurtzburger, and Shiseido’s Clé de Peau commissioned the artist more recently to design the packaging for its winter collection.

Up next, Longshore’s contemplating a pop-up next year that would bring her brand to the West Coast in San Francisco and Los Angeles.

Her book “You Don’t Look Fat, You Look Crazy,” published by Judith Regan’s imprint Regan Arts, is due out February.