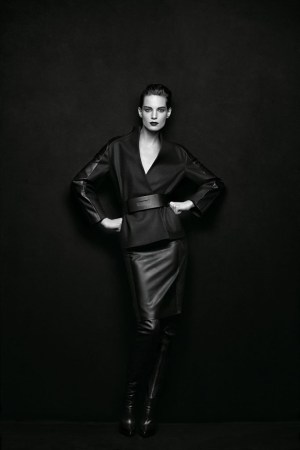 NEW MERCH, NEW LOOK: Porsche Design is getting a makeover.

Coming off its 40th anniversary women’s handbag collection launch, the German company is reinventing its product as well as its image through a new advertising campaign.

As part of its ongoing evolution to be known as a 360-degree fashion house, Porsche has nabbed Peter Lindbergh to photograph its winter collection.

The ads depict the brand’s simple yet elegant design philosophy and will appear in August issues of Vogue, GQ, WSJ. Magazine and Hollywood Reporter, among others. Shot in black and white, the ads feature  models Iris Strubbeger and David Florentin — she’s wearing Porsche designs, including its recently launched Twin handbag collection, and he’s wearing the brand’s men’s wear.

“Everything is to the point. It’s not only the product, it’s the styling,” said Porsche Design chief executive officer Juergen Gessler. “Black and white is a very pure way for shooting. We found that it’s very much an interpretive look at the creative thinking. ‘Modern urbanist’ is the theme of the collection.”

Along with the ads, Porsche will be launching a coffee-table book that will include shots from the campaign and images of the brand’s accessories. The book, retailing for between $50 and $60, will be sold exclusively in Porsche boutiques.

According to Gessler, the book and the campaign are both part of a larger push for the brand to be known for its fashion collections.

Since its 40th anniversary, in which it launched bags, Porsche has already seen a 46.8 percent increase in sales over 2011. Gessler said overall turnover in 2012 totaled 116 million euros, or $148.7 million at current exchange. The brand will also release three distinct bag shapes — a tote for less than $1,000, a shopper for $2,000 and a hobo for $1,500 — and it will continue its retail expansion.

In 2012, Porsche, which operates 23 doors and has 86 franchised locations, broadened its reach with stores in Munich, Berlin and Hong Kong. It also opened a slew of franchised doors across North America, the Middle East and Europe.

This August, Porsche will open its second freestanding store in London, on Brompton Road, and it has plans to open flagships in Milan and Paris within the next two years.