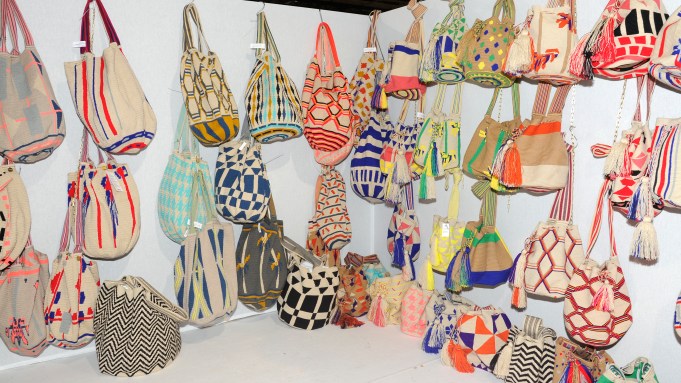 With added value and human touch more important than ever, the big focus, according to retailers, was on natural materials and artisanal accents such as woven leathers, hand embroidery, beading and crochet, as well as decorative accents like painting on straw and leather. Animal and novelty motifs were also prevalent.

Held concurrently at the Porte de Versailles, the four-day events, which wrapped on Sept. 5, both saw a dip in traffic with the sluggish economic climate and France’s recent terrorists attacks continuing to impact turnout.

The Who’s Next and Première Classe shows combined saw a 7 percent drop in visitors versus last year’s session, to 38,258 visitors, with an 8.2 percent decrease in French attendees and a 5.4 percent decline in international visitors. The Americans were back with a 13.3 percent rise in attendance, with a strong turnout from Scandinavia and the Middle East.

At Bijorhca Paris, visitor figures were stable despite a continued drop in attendance from foreign visitors, notably from the U.S. and Asia. A strong turnout from the Middle East and countries like the Netherlands helped compensate.

“Times are hard, especially in Paris, but the rest of France is not that bad, on the contrary,” said Charlotte Pissavy-Yvernault, buying director for Printemps’ private-label line, Au Printemps Paris. Scouting suppliers at Première Classe, she observed a shift to nonleather designs for bags. “What I’m seeing a lot here is straw bags with all the tassels and pom-poms, and the mini bag is still here,” Pissavy-Yvernault said. “It’s a little more colorful and ethnic, with a handcrafted feel.”

New bag vendors included Chylak, a Polish label whose beautifully produced totes in embossed faux python in black or shades of gray, made from Italian leathers and hardware, came stamped with Made in Poland and a serial number.

Perusing the jewelry brands, Rita Queiroz Ribeiro, founder of Violet & Ginger, a multibrand store based in Porto, Portugal, saluted Le Fourbi de Capucine for its “striking use of color and motifs.”

Patricia Chelin, director of the personal shopper service at Who’s Next, also shared her top jewelry picks. They included Soko for “its modernity, artisanal handiwork and ethical approach”; Anisha Parmar for its urban/ethnic creations, and Danai Giannelli, who for her By the Sea line cast precious-metal earrings and pendants from seashells collected from her favorite beach on the Greek island of Lesbos.

Première Classe also staged the first edition of its designer eyewear village in partnership with Silmo Paris. Highlights included Spain’s Parafina, specializing in eyewear made from sustainable or recycled materials: bamboo specs that float in water, styles made from recycled trash and super-bendy unbreakable glasses made from recycled bottles.

Brian Glasgow, vice president global sales of Los Angeles’ Sama Eyewear, who embraced the access to small lifestyle boutiques, said: “What is happening in a lot of European shows is a great deal of the travelers are from outside Europe. I find this show heavily concentrated with Europeans, which is nice.” The brand presented a tight edit of styles from across its five categories, including oversize geometric frames for the trend-driven consumer and traditional jewelry treatment for the male customer looking to elevate his sunglasses.

Visiting Bijorhca Paris, meanwhile, Joy Roseau, founder of Meraki, a concept store based on the island of Martinique, said she’d seen a lot of  fine, purist designs and pastel tones as well as stacking bracelets and rings. She singled out Marie Duvert’s collection, saying: “I like the fact that it’s made in France. It’s also a small firm, so the contact is more personal and they’re more reactive. Also, the designer used to work in ready-to-wear, so really knows how to adapt pieces to the body’s form, be it the ear or wrist.”

Visiting the show’s new “Premium Area,” which regrouped on-trend contemporary brands, Florence Gosset, owner of Sans Pareil, based in Verdun, France, in the Alsace-Champagne-Ardenne-Lorraine region in northeastern France, lauded Spanish brand Rosa Mendex’s collection of sculptural rings and earrings made from brass and different glass treatments, from Murano to mirror. “It’s pure and has its own signature, while remaining commercial. Clients today are looking from something different from what they can find in all the chains and this ticks the box,” she said.

Other bustling stands included Flowers for Zoé, whose bestsellers included handmade cuffs honed from fine strips of metallic leather, and Les Georgettes, which specializes in customizable bracelets combining metal cuffs and interchangeable leather bands. Les Georgettes was cofounded by Groupe GL Altesse, one of France’s leading jewelry manufacturers that has existed since 1905, and Texier, a leather goods manufacturer based in Brittany. Officially recognized as part of France’s national heritage (or Entreprises du Patrimoine Vivant), both companies are part of the Renaissance Luxury Group.

Retailers concurred silver is the “in” metal. At Turkey’s Khailo, buyers snapped up fantasy rhodium-plated rings in sun, snake and arrow motifs. At the more premium end, bestsellers at Rosekafé, whose pieces are made by hand in a Marseille atelier, included onyx sautoirs threaded with silver-gilt moons and patterned dalmatian jasper beads.

Eco-ethical brand Nodova presented a different take on precious with its boldly colored creations made from the seeds of tagua nuts, commonly called “vegetal ivory.” Working with a local collective of women, the seeds are sustainably harvested from palm trees in Ecuador’s Amazon rainforest before being polished and colored. The brand is sold in 300 stores in 15 countries.