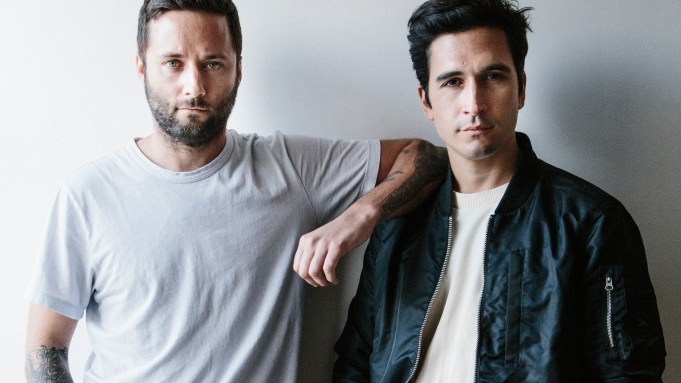 For the first time, the New York-based company has taken a macro-approach in reviewing its bag strategy as it looks to counter the “fatigue” presently hampering a struggling accessories market.

As such, designers Jack McCollough and Lazaro Hernandez have created new “Hava” and “Hex” visual design families. They have also created an updated version of the brand’s hit PS1 bag design — called the PS1+.

“We are kind of approaching bags with a new strategy. In the past, we had the PS1 as our core family and for the show would do more fashion-forward designs, nothing so much about function, more about one-off kinds of bags,” McCollough said in an office at the label’s bilevel SoHo headquarters.

“I think everyone has seen a decrease in sales across the board. It’s no secret that the market is tough out there for everyone, especially the handbag market. It’s saturated with a lot of sameness and I think people just want new product, new well-designed fashion-forward product, and so we have been working hard the past year-and-a-half designing this whole offering,” said Hernandez.

Not since the brand launched its first bag — the PS1 in 2008 — has it assessed its overall approach to the accessories market. Proenza now hopes to double its accessories sales, which presently represent half its overall business, over the next two to three years. The company declined to reveal actual sales numbers.

“We had tremendous luck with the PS1 in a lot of ways, because a lot of things just fell into place, so a lot of these things we never had to think about before. But we are getting all departments of the company together and getting aligned on what we want to put out there and what the message is, so it does feel like a new start in a way,” said McCollough.

The label introduced its first run at the Hava style in its spring runway show. Taking its name from the Cuban-Spanish slang word for bag (that season was an ode to Havana’s licentious femininity), the style has since been expanded — now fabricated in myriad prices, sizes and shapes.

“We didn’t want to start from scratch, we wanted to have a language so we were kind of looking at a lot of PS1s and PS11s and honing in on the codes of those bags and what makes those bags our bags,” said Hernandez. “So it was taking that language and building upon it, and that’s how this Hava came about. It’s more of a long-term bag for us.”

The Hava range is meant to strike a continuity between the brand’s increasingly sophisticated ready-to-wear offerings and its original PS1 accessory core. The new bags evoke archetypal PS1 features with a flap closure, top-stitching and minimal hardware. Since its introduction, Hava codes have been translated into a variety of stockkeeping units — sliding on an escalating price structure from $1,250 for a cross-body, up to $1,950 for a medium top-handle structured bag.

“We took the [PS1] clip and curve and expanded it, made it big and hollowed it out but kept the triangulation that is very much a part of what we do,” Hernandez said of the Hava’s proprietary hardware.

The range will continue to expand and shift, taking seasonal inspiration from runway collections. “Once you have a family and new codes it’s really easy to build upon that, because there is a world now, it’s the beginning, creating that idea is the tricky part,” said McCollough.

A Hex family has also been introduced. The bucket bag range of varying sizes and fabrications is engineered as a triple helix — with three material panels winding up from a geometrically shaped bottom.

To rekindle interest in the PS1 range, the duo has also released an “elevated” update on the design — intended to comfortably sit side-by-side with their slicker Hava offerings. It will hit retailers in January.

The PS1+ adds structure to the original design’s slouch. It is made of a pebbled calfskin rather than a soft, smooth hide. The bag’s hardware has been updated with a fuller profile and added shine. Consumer feedback regarding the PS1 has been considered in the Plus’ design — the knot from the original PS1’s strap has been removed for easier cross-body slingage, its lining is now made of durable canvas and extra pockets (including one intended to fit an iPad) have been added.

“We wanted an updated version of the PS1 that could sit with this new kind of Hava and Hex family,” said McCollough. “To me, a girl eight years ago who was wearing the PS1 I could see carrying the PS1+ now.” The PS1 will continue to be produced and sold. Both styles are priced the same, at $1,780 for a standard medium size.

McCollough and Hernandez said that pricing was a priority while restructuring their bag assortment.

“I think the minute the customer stopped buying as many bags as they were before, I think [pricing became important],” McCollough said.

Proenza’s full range of bags extends from $890 for a mini cross-body PS1 style (introduced for pre-fall) up to $1,960 for the large Hex bucket bag. Designs such as a simple tote, $1,290, and Hava cross-body, $1,250, sit at the introductory end of the brand’s pricing spectrum, while its top-handle medium Hava at $1,950 is geared at a more mature consumer. Save for special exotic editions, all styles retail for under $2,000.

“This is something we’ve never done before — creating a diversified bag collection with a specific price architecture that is integral to building the collection. The price range is meant to mimic the customer range. Ranging from the intern at an art gallery to the owner of the gallery at this point and all of the bags function accordingly,” said Hernandez.

In order to facilitate such change, which has been in development for the last year and a half, Proenza has poached a new accessories design team from an assortment of European leather-goods houses. It has also used its investment from Castanea Partners to expand the infrastructure of its private Italian manufacturing facility in Scandicci, just outside Florence.

In efforts to avoid consumer fatigue and spur spontaneity in the retail environment, the brand prefers to embargo images of its pre-collections until they near their store debuts. Pre-spring and pre-fall account for 70 percent of the company’s total sales.

The updated Proenza handbag assortment has already received strong support from retailers including Saks Fifth Avenue, Galeries Lafayette and Bergdorf Goodman, which plan to open dedicated corners to the product beginning in July. As part of its retail and distribution partnership with Club 21, Proenza Schouler has begun operating accessory-only stores in Asia. Accessory units have been opened in Guam and Macau.

The fact that McCollough and Hernandez allotted themselves time for a careful reassessment of their product offering is novel in an industry currently lambasted for “overheating” and churning out a succession of nonideas.

“In the market there has been a lot of fatigue. Every retailer is saying they want newness, so this is where our heads are at, trying to create new products, new families but not run away from them too quickly. In fashion we run the risk of moving too quickly. Customers not in the fashion world are less quick to jump on new ideas — sometimes we move on before they even know it exists and that’s a mistake,” said Hernandez.

“I think bags, more than clothes, you need to have them out there for a while for people to start to understand them. It’s not an immediate success. Even the PS1 was out for three seasons before it became this big bag that everyone wanted,” said McCollough.

They feel that with pricing, design and quality considered, their brand is poised for sustained success.

McCollough, though, was quick to admit: “I feel like so many things have to line up [for a bag to succeed]. It’s like a movie, because it can’t just be a good movie, it’s like — ‘When does it come out? What time of year is it? What other movies are out at the time?’ There are so many factors that go into play.”