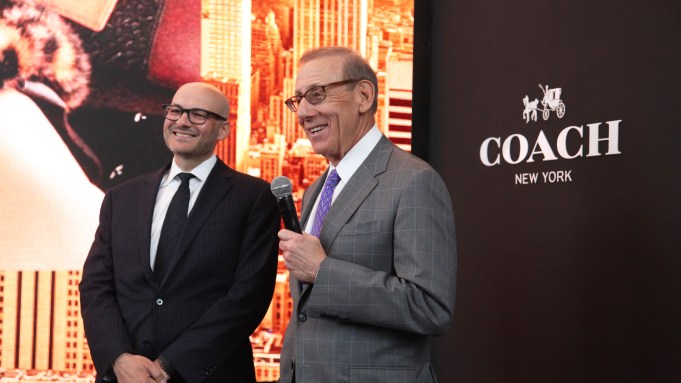 NEW YORK — Stephen M. Ross, the founder and chairman of Related Companies, was pinching himself Tuesday morning at 10 Hudson Yards, opening day for the 52-story building and Coach’s global headquarters there, where the first wave of employees was moving in.

For the 76-year-old builder, the event marked a development dream turning into an actual urban phenomenon. “Sometimes the vision can end up being different from the reality, but this is truly great,” Ross told WWD. “Today’s opening shows you what’s to come at Hudson Yards. You can see the quality of this building, the attention to detail. It’s very gratifying. It’s about integrating into the neighborhood, yet it also feels like something new and different.”

Before settling into their new digs, scores of Coach workers and their chief executive officer Victor Luis; Ross and his top lieutenants at Related, and members of 32BJ Service Employees International Union with their president, Héctor Figueroa, gathered in the Coach lobby to celebrate the milestone. The 1.8 million-square-foot 10 Hudson Yards broke ground in December 2012 and sits on the south side of the 28-acre Hudson Yards mixed-use development, at the foot of the High Line. It’s the first building to open in Hudson Yards, which is being codeveloped by Related and Oxford Properties Group. It’s considered the nation’s largest private development, extending from 30th to 33rd Streets, between 10th and 12th Avenues, and from 33rd to 34th Streets, between 10th and 11th Avenues.

Other tenants moving into 10 Hudson Yards in the weeks to come are L’Oréal USA, SAP, The Boston Consulting Group, Vayner Media, Intersection and Sidewalk Labs. But Coach was the first tenant to sign on to the Kohn Pedersen Fox-designed building, spurring leasing efforts and funding.

“We had been looking to relocate for some time,” recalled Luis. “The number-one advantage is that we can bring all of our teams into one location.” That will lead to improved communications and collaboration. Before, Coach’s headquarters were dispersed in three locations on West 34th and West 33rd Streets.

Ten Hudson Yards, Luis told WWD, is “the cornerstone of New York’s newest neighborhood. To participate in the area’s transformation is symbolic of our own transformation,” updating the Coach brand.

Keeping Coach in the same vicinity where the company has resided for more than 50 years, and in the heart of “an emerging cultural, commercial and residential community” was appealing, Luis said. “There are very few places where you have a neighborhood being created that’s the size of a city. It’s exciting.”

Coach’s relocation coincides with the brand’s 75th anniversary this year. Coach has other reasons to celebrate, notably achieving its first quarterly profit growth in three years.

Luis described Coach’s 750,000-square-foot headquarters housing 1,500 employees from Coach and the Stuart Weitzman division as a “vertical campus” with a 15-story atrium, an open-space environment, double-height conference rooms, a design studio and workshop, a terrace overlooking the Hudson River and the downtown skyline, a cafeteria and the Heritage Room accommodating up to 250 people. “There’s about 360 degrees of light with floor-to-ceiling windows,” said Luis. Coach owns less than 50 percent of the space and is considering a sale leaseback of the site.

Past the main entrance of 10 Hudson Yards are two escalators to two lobbies — one for Coach, with elevators servicing Coach offices only; the other lobby has elevators to other companies in the building.

Coach’s lobby has a huge showcase of Coach bags, a 35-foot-high ceiling, jet mist granite and bronze walls, and terra-cotta and wood floors reflecting the look of Coach’s store design.

In fall 2018, The Shops and Restaurants at Hudson Yards is scheduled to open with Neiman Marcus,  Zara, Tory Burch and Stuart Weitzman, among other stores. Asked what additional retailers are coming to Hudson Yards, Ross replied, “I’m not going to announce any now. A lot of letters of intent have been signed.”

The development of Hudson Yards is happening in two phases; first, developing above the Eastern Rail Yard section, incorporating 10 Hudson Yards, 30 Hudson Yards, the mall, a huge outdoor sculpture and public space, and the Culture Shed, among other buildings. Phase two entails developing above the Western Rail Yard, primarily with residential buildings, both affordable and luxury, with some office and retail space and a public school. Also planned is a 200-room Equinox luxury hotel.