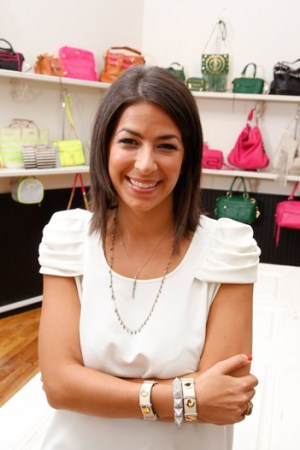 Rebecca Minkoff wants to become the face in front of the name. The contemporary accessories designer is coming out from behind her studded handbags to connect with customers and grow her business.

With 50 percent growth year-over-year and a sales goal of $30 million in the next three years, Minkoff feels her signature brand is hitting its stride. Known for adorning young, fashion-forward consumers with colorful handbags and clutches ranging from $195 to $595, the firm is building a fan base through social-media tools, including online videos and Web blogs. It recently took sales in-house and launched new categories, such as customized bridal bags and apparel.

In today’s economy, Minkoff finds it increasingly important to build a personal relationship with consumers and retailers. She joins other accessories designers who have recently taken to the blogosphere, such as Anna Sheffield, designer of Bing Bang/Anna Sheffield Jewelry, and Jessie Randall, president and creative director at Loeffler Randall.

“We asked ourselves, ‘How we can better drive attention to consumers to help push them into the stores?’” Minkoff said. “We want to use social media to understand what our customer wants as well as help our retailers. We want to ensure that our product sells and we want to work with our retailers as much as we can.”

In addition to operating her own Facebook and Twitter pages, Minkoff recently launched Minkette.com, a social networking site where she and her friends share their favorite pastimes, city dwellings or cool events happening around town. The site enlisted close to 5,000 members in its first 10 days. Minkoff also uses the site to chat one-on-one with customers and post editorial and celebrity clippings. In May, a photograph was snapped of Lauren Conrad wearing Minkoff’s Studded Rocker bag. The next day, Minkoff sold 300 bags to her top accounts.

Minkoff is also solidifying her relationship with retailers after breaking ties with the Cynthia O’Connor showroom earlier this month and taking sales in-house. Now at the helm of her business, Minkoff is focused on launching exclusives with her top accounts, such as Saks Fifth Avenue, Shopbop.com and Bloomingdale’s, where she’ll operate a pop-up shop during New York Fashion Week in September.

“We loved Cynthia and the showroom and have nothing but positive things to say, but it was a decision that we needed to make to help build our brand,” said Ori Minkoff, Rebecca’s brother and chief executive officer of the firm. “We realized we needed to own that relationship with stores and have them get to know Rebecca.”

With a capsule apparel collection bowing for spring and a full range coming in fall 2010, Minkoff’s intentions extend beyond handbags. The designer created a small belt and bracelet line for holiday and will bow a customized bridal bag collection, “I Do,” in September. The four bridal styles retail between $195 and $215. She foresees penning a licensed shoe agreement in the next three years. But for now, Minkoff is focused on her handbags and on her customers, with whom she plans to keep in close contact.

“When there’s turmoil and chaos in the market, and when old things stop working, you need to seize the moment and become a leader,” Minkoff said. “We are intent on remaining a stable point for retailers and becoming a leader in the contemporary, luxury space.”