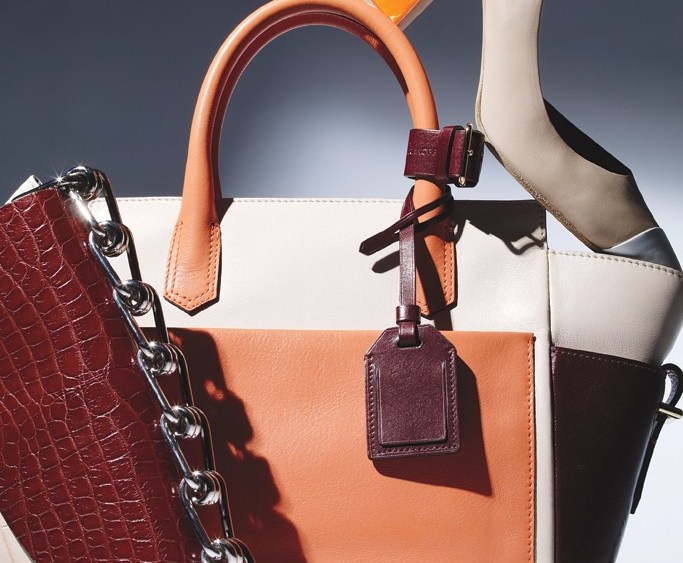 Reed Krakoff’s office for the brand that bears his name is strictly modernist — much like that of an architect. Gray felt chairs with a Bauhaus touch line a white central table that’s topped with bowls filled with markers and drawing pens. Design books are stacked on industrial shelves, while an eclectic mix of art — a Basquiat painting, a Patti Smith drawing, a Frank Stella sculpture  —is on display in the space. “They’re all pretty disparate, but something holds them together,” Krakoff says, pointing to the artwork. “I think it’s that mix that makes it interesting and unique.”

That mix is a philosophy he brings to his designs as well. Two years since launching the Reed Krakoff brand of clothes, fragrance and accessories, the latter has emerged as the top category, now accounting for the lion’s share of sales. If the ready-to-wear had some early growing pains, Krakoff’s accessories displayed a healthy momentum since the get-go. Shortly after the label’s debut, Michelle Obama was spotted carrying Krakoff’s blue leather Ribbon tote. Retailers such as Saks Fifth Avenue, Neiman Marcus and Net-a-porter.com have embraced the line, and, along the way, Krakoff has become increasingly recognized as a go-to designer for bags in exotic skins like crocodile and python. This past June, the Council of Fashion Designers of America honored Krakoff with the prestigious 2012 Accessory Designer of the Year award.

That the category is gaining such traction over a relatively short period of time is hardly a surprise. If anyone knows leather goods, it’s Krakoff. While his early career was focused on ready-to-wear — after graduating from Parsons The New School For Design, he worked at Anne Klein with Narciso Rodriguez, then at Polo Ralph Lauren and Tommy Hilfiger — he made his real mark at Coach, playing an instrumental role in turning the storied but dusty American brand into an accessories powerhouse.

The financial backing of Coach Inc., where Krakoff continues to serve as president and executive creative director today, allowed him to launch his brand with a holistic approach, offering runway clothes alongside handbags, shoes, sunglasses, watches and jewelry — a far-from-typical trajectory for an upstart.

“I feel really fortunate that I was able to have the experience of telling that story across multiple categories, because I think one feeds the next,” Krakoff says. “I know that my jewelry is more evolved and more successful because I’m able to do eyewear and shoes at the same time. And when you’re starting to build a brand’s language, each new piece that you make helps create the signature.”

That signature may still be a work in progress, but Krakoff has his goals set. “The idea is really about a new luxury,” he says, “which can mean a lot of different things but to me is always something that’s about a combination of design credibility, materials and construction.”

While such could seem obvious to some, Krakoff’s approach to accessories is anything but. Rather than using literal inspirations (i.e., a trip, a film, an exhibition), he finds his design cues as each work progresses. “I’ve actually entirely cut out the inspiration part, and don’t put a board together anymore,” he says. “I’ll do a lot of sketches and I’ll go through them. And then it’s very hands-on: cutting and pasting, then we go to materials and then loose prototypes. We really just start working and reworking. A lot of times, I have a table full of new jewelry, and I’ll just take pliers and scissors and leather and metal and just kind of make things.”

He also says his accessories will never hinge on a single “It” bag or shoe. “I think that’s a really challenging way to do business,” he notes. “You rely on something that at any moment can stop — dead. If you just have one or two ideas, people start to define your brand as ‘this bag,’ and I think of it as a trap.”

Valerie Hermann, the house’s president and chief executive officer, sees such thinking as a smart philosophy, particularly for expansion into new markets. “From the beginning, Reed had a strong point of view on accessories,” she says, citing the Boxer, Atlantique and Gym bags, as well as his T Bar bracelets, as customer favorites. “We recently opened in international markets like Italy, France, Russia and the U.K., and accessories have been received very well. I can say that already we have at least three or four bags making the business.”

Krakoff is aware that the luxury world is entirely different from the more mainstream one that Coach frequents. Where the success of his Reed Krakoff accessories is driven mostly by exclusivity, Coach must factor in an accessible price for a wide-ranging demographic. “There are what I call ‘positive limitations’ in every area of design,” he offers. “The luxury market is really competitive, and you’re competing on design and desire. That’s it. You really need to create something that people fall in love with.”

That formula seems to be working. Neiman Marcus carries Krakoff’s handbags in eight doors, and will add another one for spring 2013. “There is a lot of name recognition with him,” says Ken Downing, Neiman’s fashion director and senior vice president. He adds that the appeal is twofold. “There is great design but also at a price women embrace immediately.”

Saks Fifth Avenue, which sells the collection in 17 stores. “Business is tracking quite well,” says Cody Kondo, Saks’ senior vice president and general merchandise manager of women’s accessories. “Since the launch period, we have been adding new markets, and we are quite pleased with the reception.”

Kondo cites the Krakoff brand’s American, “more minimal” point of view as a strong selling point alongside its “interesting but understandable” color combos, including fuchsia and coral, sage and lemon, and blue and orange.

“You have great creativity with Reed and his team,” Kondo notes. “You have excellent merchandising expertise and management, and then, frankly, there is the horsepower and bandwidth of a big parent. It’s really a wonderful trifecta.”

Krakoff isn’t one to rest on his laurels. For the line’s next phase, he’s striving to explore new territory. “I often say, ‘What would I never do?’ That’s the most interesting thing to bring into a collection.”