Leather luggage and handbag brand Ghurka is on a crusade to reconstruct its archives. 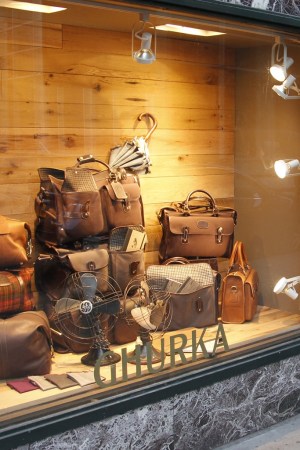 Leather luggage and handbag brand Ghurka is on a crusade to reconstruct its archives, urging collectors and longtime owners to come forward with rare and discontinued styles.

This is among the initiatives the 37-year-old company is taking to reposition itself. New ownership has appointed a new creative director, Steven La Guardia, and returned to its own retail, opening a store in New York.

Under La Guardia’s direction, the brand released additional lines and product ranges, expanded upon its current offerings and has implemented a two-tiered marketing strategy — aiming to appeal to the devoted, longtime customer as well as new and younger shoppers.

President and chief executive officer John Reuter can often be found scouring eBay and “constantly bidding against the same people” over and over, according to La Guardia and vice president of brand communications Pam Bristow, who said the ceo is determined to get his hands on obscure silhouettes (including the No. 4 Gearpack, No. 67 Stash, No. 153 Sentry and the No. 160 Backoffice).

Reuter formed Brightwork Brand Holdings with a group of private investors specifically to acquire the Ghurka brand, its trademark and related assets. Brightwork took over in September.

“The most important thing to help the brand grow and rebuild the quality is to evolve from the original collection,” La Guardia said on a tour of the new 59th Street boutique, which opened Nov. 25. He helped develop the store, from concept to completion.

The brand had once operated more than 10 freestanding stores in the U.S., but they shuttered over the past decade. It now counts e-commerce from its Web site as 60 percent of its business. La Guardia said the brand saw $2 million in retail sales last year and is looking to double that this year.

The Original collection includes 48 styles of reissued leather and leather and canvas or wool combo bags that retail from $795 to $2,300 (as well as the $6,500 Eagle gold bag). Each style is numbered, including the brand’s bestsellers: the Express No. 1, a carry-on bag with two front pockets, and the Cavalier 1 No. 96 (as well as the corresponding Cavalier 2 No. 97 and Cavalier 3 No. 98), the signature weekend bag.

Limited-edition styles are available in those same materials from $295 to $795 for all leather and combinations of leather and fabric or wool silhouettes. La Guardia also introduced an all-canvas range that includes the Weathered crossbody, tote and messenger that retail for $195, $295 and $295, respectively.

He added that 85 percent of the bags are American made — the Original collection is produced in Norwalk, Conn., just steps from the original factory established in 1975, and the limited edition styles are made in New York. The brand is adamant about bringing most of its production back to the U.S. from Europe and Asia by the end of 2013.

Describing the new 1,140-square-foot store as “utilitarian chic,” La Guardia said shelving units were inspired by vintage luggage racks that one might have found on a steamer — and the ebony stained oak cabinetry is reminiscent of a window display in a French boutique. As for the shiny black motorcycle sitting smack in the middle of the store — it has a sidecar upholstered in Ghurka’s signature chestnut leather.

The store is also peppered with a small selection of complimentary items — such as elephant hair bracelets from Millett Mercantile, Armstrong & Wilson pocket squares and Pendleton blankets.

Ghurka is carried at Mitchells Richards stores in Connecticut, Malouf’s in Texas, Gary’s in Newport Beach, Calif., and Isetan in Japan. The firm hopes to open more shops in New York this year, including in SoHo.