By Miles Socha
with contributions from Tiffany Ap, Samantha Conti
on June 30, 2021

The Delvaux store on Sloane Street

Richemont said it purchased 100 percent of Delvaux “in a private transaction” and did not name the seller: First Heritage Brands, a vehicle of Hong Kong billionaire brothers Victor and William Fung, who have already exited their other European fashion investments, Sonia Rykiel and the shoemaker Robert Clergerie.

In a statement released after the close of trading on the SIX Swiss Exchange, Richemont said it would “position Delvaux for its next stage of development by enabling Delvaux to leverage the group’s global presence and digital capabilities, to develop its omnichannel opportunities and customer engagement.”

“The maison’s rich archives and creative momentum over the last 10 years represent a solid foundation from which to grow the company for the long term, strengthening Richemont’s presence at the pinnacle of the leather goods category,” he added.

Founded in 1829, Delvaux is considered the oldest luxury leather goods house in the world, the first to file a patent for leather handbags in 1908, and one of the first luxury goods firms to introduce seasonality into its collections in the 1930s. It has been an official supplier to the Belgian royal court since 1883, and boasts a meticulous archive of more than 3,000 styles, all patented.

Delvaux is headquartered in Brussels, and has a workshop that produces prototypes and exceptional, made-to-measure products. It also has two production sites in France, the Avoudrey site in the Doubs region and Bourg-Argental site in the Loire region in Eastern France. The house’s iconic Brillant handbag, launched in 1958 and still made using the inside-out passepoil technique, represents around 10 hours of skilled work. 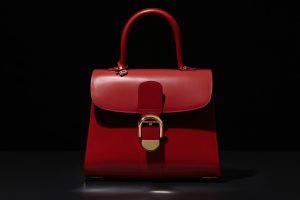 The Diva Brilliant in lipstick red by Delvaux  Courtesy

In the ’80s, Delvaux helped promising fashion student Martin Margiela make a bag for a collection he presented for the Golden Spindle competition, and worked for a time in the 2000s with another Belgian designer, Veronique Branquinho.

In a statement, Richemont said the Delvaux acquisition would have “no material financial impact on Richemont’s consolidated net assets or operating result” for the fiscal year ending March 31, 2022, noting that Delvaux’s results would be grouped under the “other business” area.

First Heritage Brands took a majority stake in Delvaux in 2011 with Singaporean state investment company Temasek, and grew sales from 18 million euros up to about 120 million euros, according to market sources.

The brand pushed into China, South Korea and Japan, and opened flagships on New York’s Fifth Avenue, Bond Street in London and in the Palazzo Reina in Milan, as well as a pop-up on the Rue Saint Honoré in Paris, with plans for a permanent store there. The proportion of sales generated outside of Belgium increased from 3 percent to about 85 percent, while the store network increased from 10 to 50 under the ownership of First Heritage Brands.

Last year, Delvaux accelerated its online business by adding e-commerce services to its U.S and European sites since the pandemic walloped consumer markets around the world. The brand works with JD.com to sell online in China.

To be sure, Delvaux is the kind of storied luxury property that appeals to Richemont chairman Johann Rupert, who has a penchant for buying smaller scale brands and expanding them, as he did famously with Van Cleef & Arpels and Panerai.

The Swiss group has had more of a mixed track record outside its core expertise of hard luxury, shedding Shanghai Tang and Lancel in recent years in order to focus on its top brands in the soft accessories arena.

In 2017, Richemont purchased Serapian, the high-end Italian leather goods brand, and has been using its factories to scale up production and develop expertise across the group.

“We see significant potential in leather goods,” said Richemont’s chief financial officer Burkhart Grund during the company’s 2017-18 results presentation, adding that the company’s plan was to grow its leather business organically through its existing brands, rather than rely on acquisitions.

That strategy is clearly evolving: Acquisitions are now on the agenda, and management has been fortified.

Richemont is also the parent of Cartier, Montblanc and a bevy of luxury watch brands including A. Lange & Söhne and IWC.

The Delvaux disposal represents one of the last remaining fashion assets connected to Fung Group, the Hong Kong-based sourcing giant. In 2017, it sold its stake in struggling men’s wear retail unit Trinity — which includes Gieves & Hawkes, Kent & Curwen and Cerruti 1881 — to Shandong Ruyi.

Over the years, the sprawl of the Li & Fung empire started taking its toll, with CEO Spencer Fung explaining to investors not long after he took over the reins of the business that he realized the company had many business divisions but none that were particularly exceptional. He soon embarked on streamlining the business into sourcing and logistics. But while the company began pivoting, supply chain pressures only accelerated and this coincided with the transformation of the retail landscape. Many of Li & Fung’s biggest clients were sunsetting retailers that struggled to adjust as the next generation of direct-to-consumer and omnichannel retail concepts arrived on the scene.

Meanwhile, its brand management and licensing spinoff Global Brands Group has also been beset with problems. In mid-June, the Hong Kong Stock Exchange-listed group reported that its liabilities exceeded its assets by $899 million. The firm has been aggressively cutting costs and carving off its assets, revealing it would use the proceeds from the recent sale of its Spyder division in South Korea to keep the company operating instead of paying its debts that were past due.

Pierre Mallevays, co-head of the merchant banking department at Stanhope Capital Group, served as adviser to First Heritage Brands in the transaction.