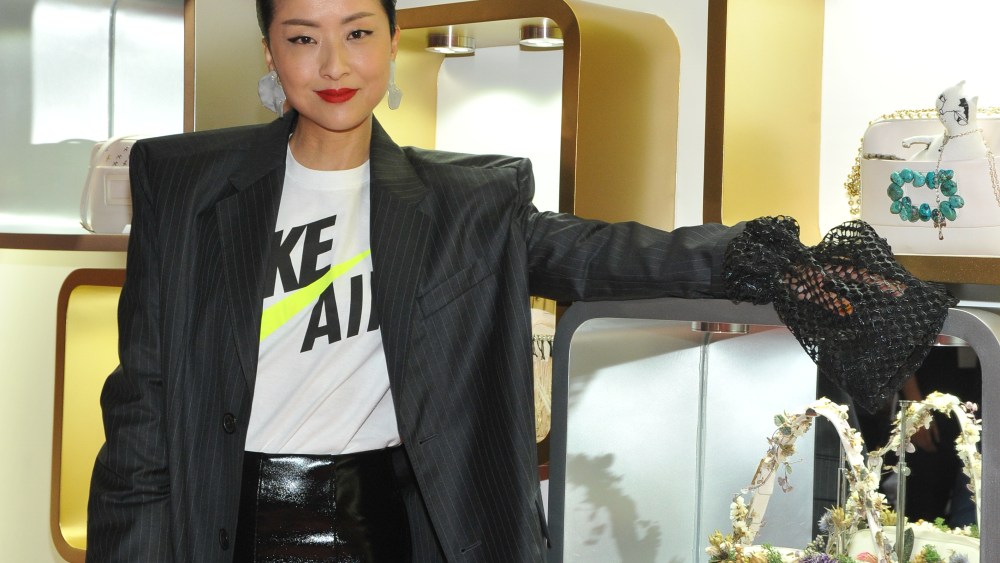 HONG KONG–Some of Asia’s most influential trendsetters got together on Wednesday for Roger Vivier’s “Photocall” bag exhibition.

The new shoulder bag style is the centerpiece for the pop-up at the Landmark running until April 14. The French brand sent a bag each to its ten selected collaborators, asking them to add their own spin on it.

“I drew a lot of inspiration from the iconic [Roger Vivier] diamond buckle,” Warne said, while standing next to her crystal and pearl bedazzled bag. “I really wanted to find the happy medium between their heritage and my aesthetic.”

Although Warne had not met most of the others invited to take part in the exhibition before, she said she was happy to see her good friend Cao there.

“I didn’t know she was doing the same project as me until I arrived in Hong Kong,” Cao said. “It was pretty exciting for me to find out what everyone has been up to. There’s some really, really interesting pieces around.”

As a soon mother-to-be, Victoria Tang embroidered two hearts on her design representing her and her baby. Although the baby is due to arrive next month, she wasn’t planning on taking time off from her creative agency Thirty30, she said.

Liger boutique owner Hilary Tsui’s bag was one of the most elaborate, involving an intricate floral arrangement. “I do put a lot of flowers at home so I thought I should use some on this bag and I went to see my florist,” Tsui remarked.

The bag needed a bit of touch up before the cocktail, Tsui said, admitting her beautiful, if complicated design was probably not something she could actually use and wear.

In any case, all of the pieces in the exhibition were designed to be one-offs, and not for production.

“It goes straight into the archives,” Warne explained. ” I have no idea what it would have cost [to make it for sale] because there was a lot of Swarovski on mine.”

However, those with a DIY scratch to itch could take denim tote bags handed out at the party and go to the appliques station to customize theirs as they please.