Entering her second year in the accessories business, Sang A Im-Propp has been recognized not only for her design aesthetic, but her entertaining skills, too. 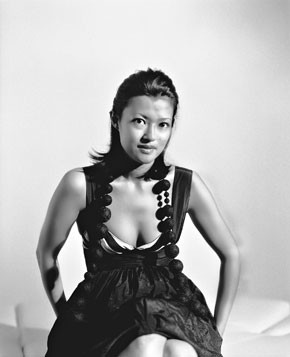 Entering her second year in the accessories business, Sang A Im-Propp has been recognized not only for her design aesthetic, but her entertaining skills, too.

The founder of the firm Sang A is from South Korea, where she was a famous entertainer who acted, sang and danced. Now Im-Propp, who emigrated to the U.S. in 1998, focuses all her creative energies on accessories.

Last month, the designer, a native of Seoul who now lives in New York, received an accolade that is close to her heart — and former home. Sang A was among the three winners of the Samsung Fashion and Design Fund, which celebrates budding Korean designers. She, along with the duo of Steve Jun and Yoni Pai of Steve J and Yoni P, and men’s wear designer Gunhyo Kim received the award, along with a grant of $100,000 each. Previous winners of the three-year-old initiative include Doo-ri Chung and Richard Chai.

“Fashion is more than an industry. It is a medium for expression of one’s identity and an important field of culture that can determine the image of a country,” Samsung president and chief executive officer Jin-Hoon Je said in a statement. He said the fund, founded in 2005, would “help Korean fashion make its mark on the world market.”

Sang A handbags are made primarily of exotic skins such as alligator, snakeskin and shagreen. Signature looks include a zip-top square satchel with square-shaped gold hardware and a parallelogram-shaped clutch.

Starlets Keira Knightley, Lindsay Lohan and Mischa Barton have carried her bags, which are made in Italy. The line is sold in 25 doors, including select Neiman Marcus stores, Kirna Zabête, Tracey Ross and Satine in Los Angeles.

“I focus on clean shapes,” said Im-Propp, who added that her inspiration is derived from Art Deco, Ellsworth Kelly and all things Sixties. “My aesthetic is modern classic with a dose of avant-garde.”

As for the honor, Im-Propp said, “I got very emotional at first. I feel like my home country is behind me.”

Im-Propp has thought about creating a ready-to-wear line, but not until she’s done with her accessories endeavor.

“My canvas is always black, all the colors that I use go with black,” she said. “I’m very focused on different materials you can’t find.”