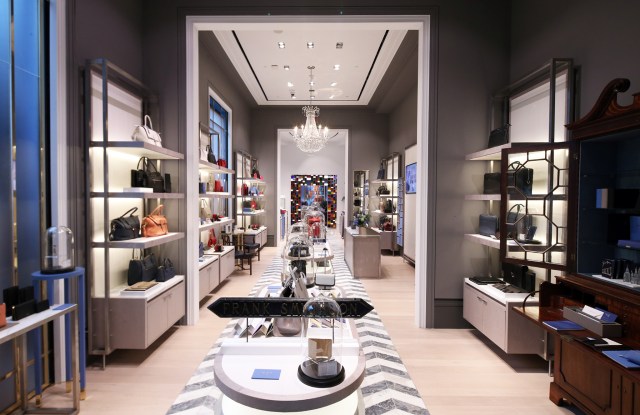 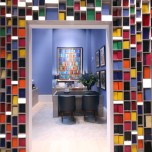 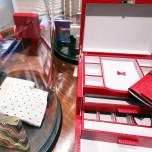 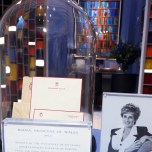 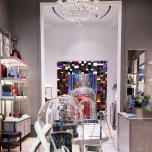 The 129-year-old accessories and stationery brand has moved its New York flagship from its home of 15 years at 4 West 57 Street to a storefront at 667 Madison Avenue, directly across from Barneys New York. The store is Smythson’s first move under new chief executive officer Mark Daley to aggressively ramp up U.S. operations.

On Monday evening, the label toasted its new address with an event attended by Melanie Griffith and Lauren Santo Domingo, as well as the label’s creative consultant and former creative director Samantha Cameron, the First Lady of Britain.

“It’s very exciting, we have been wanting to find the right store on Madison Avenue for a long time and I feel that we definitely have — so it’s an exciting moment for us. We have definitely got a huge international appeal, it’s great,” Cameron said of the store’s opening.

“I think the amazing quality of the product, the sort of quirky British approach to luxury goods, [and how] the brand really tries to play with colors and textures — I am hoping it’s the Britishness of the brand that people will appreciate,” she added of her hopes for Americans’ perception of the label.

Cameron teamed with architect Tom Bartlett to create the retail concept for Smythson’s Bond Street flagship, a blueprint which has also been implemented on Madison Avenue.

The brand’s full range of men’s and women’s leather goods, as well as stationery and diaries are displayed in a poppy, elevated manner.

To mark the opening, Smythson has mounted an in-store exhibition dedicated to its history. “The Curious World of Smythson” includes a display of archival mementos that once belonged to the likes of Princess Diana, Sigmund Freud and Katharine Hepburn, among others.

“It’s a pretty big effort all around to be focused in a market which had really just maintained itself over the last 15 years,” said Daley, who joined the brand last August 2015. “We had this great little store doing really great business with a really loyal team and loyal customers, but it never had the weight of the business and brand behind it.”

The new store — at 1,700-square-feet — is about 35 percent larger than the brand’s prior outpost. Its hours will expand on those from the previous address, operating on a seven-day-a-week schedule (compared with the previous six), with longer opening times.

The company declined to reveal sales projections, but said the store’s goals build on the business done at the previous address. Daley said that in the future, the U.S. would “ideally” represent one-third of Smythson’s global sales.

U.S. sales are consistent with the brand’s global breakdown, with leather goods representing 70 percent of the business and stationery the remaining 30 percent.

An additional New York unit will open later this year inside Westfield’s Oculus mall in lower Manhattan. Daley said that his team is “looking at two other New York locations as well.”

“Our current focus is to really get aggressive in New York over the next 18 to 24 months and then start in Los Angeles – really looking at both coasts, and we are going to combine that with working with airports in both cities as well as doing a lot of emphasis on the Website, which for us is not just retail but how we approach digital marketing and social media,” he said.

To aid in its Stateside expansion, Smythson has implemented a strengthened U.S. infrastructure – including a localized distribution center and a team of dedicated U.S. market executives. The brand has also updated the back-end of its Web site and has instituted a new point-of-sale system to gather better-detailed consumer data.