Bags and shoes to hit Louis Vuitton stores in March. 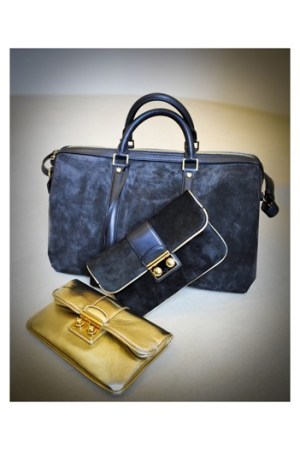 TOKYO — Sofia Coppola is making her directorial debut — in terms of handbags and shoes that is.

This story first appeared in the December 8, 2008 issue of WWD. Subscribe Today.

Five years after she paid tribute to this city in her Oscar-winning film “Lost in Translation,” Coppola is back to unveil her line of accessories for Louis Vuitton, consisting of slouchy duffle bags, discreet clutches and retro wedge sandals. She and Vuitton feted the collaboration with a party here Friday night at Château Restaurant Joël Robuchon. The collection will hit select Louis Vuitton stores in March.

Coppola said the collaboration took shape during a visit to the custom orders department at Vuitton’s factory in Asnieres, France. “To start with I wanted to make a bag for myself and then we talked about making a little capsule collection,” she told WWD. “My friends and I are always searching for the perfect day bag. It fits all your things but isn’t too big and isn’t too heavy.”

The director said she opted for a classic sensibility rather than anything trend-driven. “I wanted a bag that I could use every day that was coming from the heritage of Louis Vuitton’s great leather goods, not connected to the fashion side of the brand,” Coppola said, adding she spent about a year working with LV artisans to get things just right. “We went through a lot of prototypes but it was fun. It was always exciting to get a new one and I would try them out and add things.”

The fruit of that labor, the SC Bag, comes in four versions: one in dark gray suede, two in navy blue or burgundy calf leather and one in LV’s signature monogram canvas. “I didn’t want to have black because I feel like you wear it so much,” she reasoned.

For evening, Coppola designed four compact clutches with buckles resembling the locks on Vuitton’s classic trunks. Coppola said she thought of Lauren Hutton, one of her “fashion heroines” when designing a slightly larger version of the clutch in LV monogram canvas.

The filmmaker also channeled the Seventies when she designed her take on the peep-toe wedge sandal. She was eager to craft “a heel you can really wear all night and it’s comfortable but still looks chic,” she said, adding she also took versatility into account. “I travel a lot and when you travel, you don’t want to bring 10 pairs of shoes.”

Coppola, a close friend of Louis Vuitton creative director Marc Jacobs, said she really enjoyed the design experience but plans to keep focus on films. To that end, she is planning to start work on a movie next year, but she’s mum on the details.

“I’m just at the beginning of getting that started. I took a break after [her last film] ‘Marie Antoinette’ and having a baby,” said Coppola, whose partner, French singer Thomas Mars, and daughter, Romy, accompanied her on the trip, her first trek back to Tokyo since promoting “Lost in Translation” in 2003.

“Everyone said, ‘Oh it’s so different’ and I haven’t seen the big difference,” said the director, before heading over to one of her favorite sushi restaurants for a late lunch. “For me it has the elements that I remember about Tokyo.”