Stella McCartney and the Art of the Nonleather Goods

The designer's accessories business — and her brand on the whole — is on a roll. 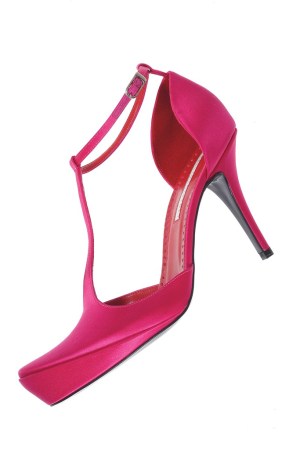 When Gucci Group launched the Stella McCartney fashion house in 2001 in a 50-50 joint venture with the designer, the luxury conglomerate was in the midst of an acquisition spree. Just before it closed the McCartney deal, Gucci Group, now known as PPR’s luxury division, had picked up Bottega Veneta and was hot on the trail of Balenciaga.

In building his stable of star brands, it was plain to see why Domenico De Sole, then-chief executive officer of Gucci Group, would be interested in McCartney, to whom he had been introduced by Tom Ford. McCartney had cemented her reputation as an exciting female designer during her four-year stint as creative director at Chloé. The rock-royalty pedigree didn’t hurt. But there was a footnote to the conversation: Gucci was and always has been a leather goods house; likewise Bottega Veneta. McCartney, on the other hand, has always been a proud vegan who opposes the use of animal products in any way. Though her label was positioned as a ready-to-wear house from the beginning, the fact that accessories, particularly those made from leather — “It” bags, shoes, wallets — have long been the gas in the tank of fashion’s luxury sedan did not necessarily bode well for the size and potential of McCartney’s business.

“After a couple of years my [then] ceo [James Seuss] was like, ‘I’m not sure if you can have a really strong accessories business because you don’t use leather. It’s a real struggle and people can’t get their heads around it,’” said McCartney over breakfast at the Bristol hotel in Paris a few days before her spring show. The association between leather and luxury has long been ingrained in the consumer psyche — just look at Hermès — and in McCartney’s early days, few designers would consider working only with alternatives. “I was just getting to the point where I was kind of accepting that,” said McCartney. “I was like, ‘Wow. That’s why I can’t have a strong accessories business?’ The product’s great, it looks desirable, it feels desirable, it’s made as beautifully [as leather goods] and it takes as much time and consideration if not more, actually.”

Things have changed relatively recently. McCartney’s accessories business — and her brand on the whole — is on the rise, growing in the midst of a recession without a patch of leather in sight. On Tuesday, McCartney won Designer of the Year at the British Fashion Awards and her label also scooped Brand of the Year.

According to McCartney’s current ceo Frederick Lukoff, accessories account for more than a quarter of the brand’s turnover (PPR does not break out figures for its individual labels). François-Henri Pinault, chairman and ceo of PPR, attributes the accessories’ success to consistency of message and matter. “It’s mainly due to the fact that they are true to the brand’s values,” said Pinault, who has no issue with leather goods yet is very involved in environmental policies. “Stella McCartney products reflect her principles, and people appreciate this. Not using leather or fur is part of that and creates a real point of difference. This commitment of Stella requires, as a consequence, to be even more creative and innovative, and she is.”

Handbags make up the bulk of the label’s accessories business, but McCartney also has shoes, sunglasses, jewelry and small nonleather goods. “Neiman Marcus has supported the Stella McCartney handbag business from the very beginning,” said Ken Downing, Neiman Marcus’ fashion director. “We are huge fans of Stella; our customers are huge fans of Stella.”

McCartney has had accessories since Day One, showing them on her runway, if not always in a serious way. For example, her first collection, for spring 2002, featured a cross-body bag shaped like a guitar. If she sputtered for consistency for a while, there were what she calls “moments:” the Appaloosa (coated cotton lined with velvet) bag from pre-fall 2006; stretch (coated Lycra with a crinkle effect) over-the-knee boots from 2005, and the Linda shoe, a simple faux patent shoe with a buckled toe and cork sole, which has been a hit since its debut in spring 2010 and is now a collection constant. In 2009, McCartney introduced the Falabella bag, a slouchy hobo tote, done in coated Lycra with thick braided chain trim and handles. Though not shown on the runway, it got a reaction immediately.

“We saw a commitment from the accessories buyers,” said McCartney. “We also committed to the Falabella bag.” It has evolved into a classic series including a fold-over style, a tote, a small cross-body, a clutch and an iPad case, all of which have the chain trim, though materials used for the body of the bag vary from season to season.

Initially some retailers balked at the idea of nonleather accessories, especially at a designer price (Falabellas range from $250 for an iPhone case to $1,685 for a tote). “We have been so surprised at the business, quite frankly,” said Beth Kanfer, fashion and co-branding director of handbags, soft accessories and jewelry at Saks Fifth Avenue, McCartney’s biggest retail partner in the U.S. “We really thought our customers were leather- and exotic skin-focused, but the minute we bought the bags there was extreme demand. At the end of the day, it’s all about the look and feel of [McCartney’s] product. I don’t even think that a lot of our customers know that it’s not real leather.”

In that case, it’s a bit like sneaking medicine into the fruit juice, which isn’t easy to do — perhaps another reason why McCartney has carved such a strong niche. “If you don’t have those sort of ethics built into your belief system, you probably won’t bother because it is so difficult each season just to find the materials and to find the colors and to find the wide scope of offerings,” said McCartney. “One season you can find incredible organic canvases that are price-point sensitive and can have the right look and that can deliver on quality and desirability, and then the next season they’re discontinued or the company went out of business because of the recession. It’s constantly moving and constantly changing.”

The sustainable world is governed by a matrix of officiating bodies, often on the local level, that define and certify what’s biodegradable, what’s eco-friendly, etc. Asked how legitimate they are, McCartney said, “They’re as legitimate as any other governing body that hands out [approval]. It’s just like somebody saying a cigarette has chemicals in it.” And these bodies can pop up, disappear or change their rules in an instant. Then there are the import taxes, which seem biased against environmentally friendly pursuits. A representative for the brand pointed out that leather handbags are taxed at 9 percent in the U.S., while nonleather handbags face a rate of 17.6 percent.

The golden rule for McCartney is she will not use anything that has been alive. No leather, no fur, no horse-based glues and no feathers, although if she can find a certified humane supplier who collects feathers that have fallen out of the bird as opposed to being plucked, well, fine. The same goes for silk, for which McCartney seeks cruelty-free suppliers. McCartney is also firmly against the use of PVC because of its harmful effects on the environment. There’s a printed eco-linen Falabella range for spring, while the current offerings on McCartney’s e-commerce shop include a fluffy “Faux Fur” version, a “Fur Wool” style, which is a chunky woven yarn meant to wink at real fur, and a few colorful “Pythons.” “Faux” is a funny term, as it only defines what it’s not rather than what it is.

When asked to break down the material content of the Falabellas in the resort look book on the table in front of her, McCartney started turning the pages. “These are probably some kind of organic wool,” she said. “They can be linens. They can be coated cottons. They can be polyesters. They can be different materials. The funny thing, what I always find strange about the leather industry, is that actually a lot of it doesn’t look like leather anyway. They create PVC, which, for instance, isn’t leather. There are a lot of treatments you can do and apply to a base. Most people just apply that to a leather base and we apply it to another base. It’s not like people [always] use real crocodile anymore. They can take real leather and stamp it. So we just take a different base and we treat it and stamp it.”

Whether stamped, bonded or coated, not every material is cut out for the weight and wear of something that has traditionally been dominated by durable leather. McCartney and her team put the products through rigorous testing to make sure they will stand up. “We’ll have great moments in the early design process but then we realize we can’t do it because you need to have this made in this way,” McCartney said. “Then we’ll just say, ‘OK, we won’t compromise the kind of ethical charter that we’ve built up.’” It’s then back to the drawing board to figure it out.

As part of the PPR fold, McCartney has world-class production resources at her disposal. Convincing them to work with leather alternatives was just one of many challenges. “The industry was not used to it, we had to push to change the manufacturing process, the sourcing and create a positioning that didn’t exist in the market,” said Lukoff. “We still have work to do to overcome some of the legacies of the decades of ‘genuine leather’ branding.”

McCartney is careful not to preach. “We don’t drive our message,” she said. “It’s more people inside the industry that know. I think that’s a nice thing, that our brand has grown over the 11 years and people just think of us as a fashion house and they don’t think of us as the vegetarian one.”

That does not mean McCartney won’t take measures to inform. Earlier this year, she partnered with People for the Ethical Treatment of Animals on an antileather video, its release set to coincide with New York Fashion Week in February. In it, she said her mission was not “to tell you what to wear, but to give you the facts so you can make an informed decision.” The facts included statistics on leather as a coproduct of the meat industry and some graphic footage of the farming process, as well as its environmental and ethical effects, i.e. starving the cattle, and slaughtering them without anesthesia. Asked if her views create tension in the workplace, McCartney said, “Sometimes. In a good way. We don’t shy away from the conversation. We are adults. I went in knowing; they came in knowing. We’re very much consenting adults.”

Pinault is equally diplomatic. “It has always been the PPR way to give our brands a quite large autonomy in order to let them express themselves and create,” he said. “We certainly don’t want to impose a one-size-fits-all scheme to our luxury brands, or even less to have them compete with one another. On the other hand, they appreciate the support they can get from being part of a larger group.”