The line of six handbags with playful gold-plated details will drop worldwide in July.

PARIS — Stéphane Rolland is adding his first handbags since the creation of his namesake couture house in 2007.

The smaller model, starting at 1,200 euros for the calfskin version, comes with a thin gold-plated chain to be used in addition to the leather shoulder strap, while the biggest model in the collection, priced around 2,200 euros, is made of pillowy quilted suede. Each piece is finished by chunky gold-plated spheres on each side of the bag, which can be unscrewed to remove the shoulder straps and transform it into a clutch.

“We wanted a piece that had a real personality,” said Rolland, who pointed out the playfulness of the gold-plated balls, which can be switched for zirconium-studded versions on the satin evening bag. “The whole challenge was to create a timeless product that you won’t get tired of over the years, but at the same time reflects the DNA of the brand.” 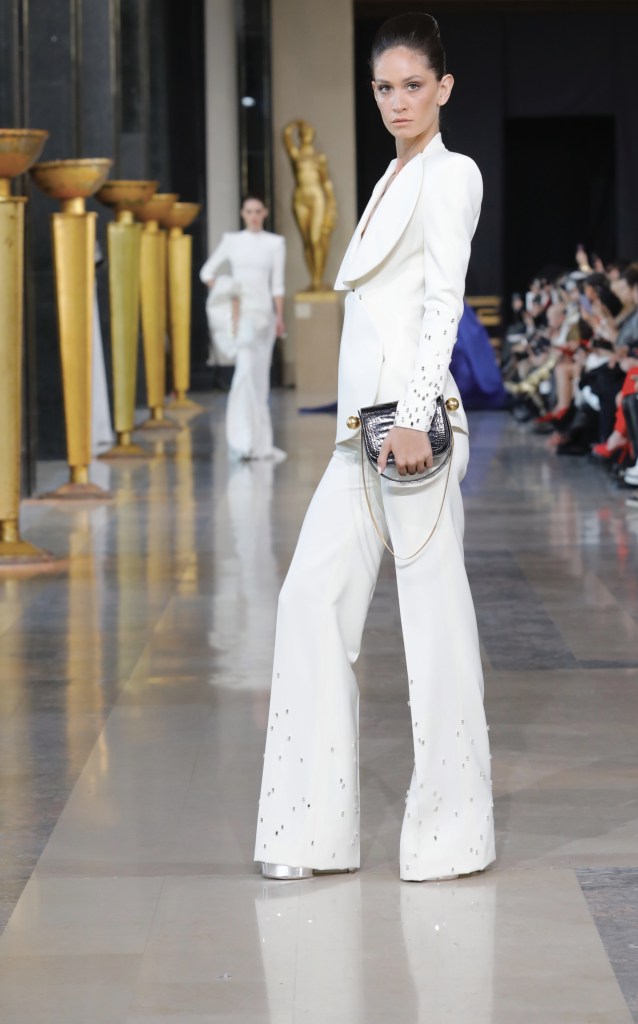 The collection, which was entirely made in Italy, will be presented to buyers at the end of February alongside nine ready-to-wear pieces.

“When we showed the bags to department stores, a couple of them suggested we should create a ready-to-wear capsule collection to go with it,” Rolland said. “As a couture designer, I only ever do made-to-order pieces, so this was a unique opportunity to be carried in stores.” The handbag collection and rtw capsule will drop in July in stores in the U.S., Middle East, London and Paris.

Next up for the couturier is a line of luxe silk scarves slated for fall as well as the relaunch of the house’s jewelry line, which debuted for spring 2019, this time more angled toward high jewelry.

The designer, who recently relocated his headquarters from the Champs-Élysées area to the quieter 17th arrondissement, currently counts 30 seamstresses at his studio. Pierre Martinez, a freelance designer who has more than 35 years of experience working within the industry, joined the brand as director of development a year ago.

“Couture isn’t just about craftsmanship, it is also an industry that employs thousands of people,” said Rolland, whose brand remains independent. “Haute couture has never been this popular: there is a whole new wealthy clientele out there who is in need of couture garments to fit with their lifestyle. We might very well be the only couture house that is actually profitable — it’s a bit of a miracle in this environment, but our business finances itself.”

The designer attributes his longevity to the longstanding relationships he has built with his clients over the years. He and his team often travel in person to do fittings, sometimes flying over to present their creations to Middle Eastern royalties.

“Some of our clients come to us to resize garments that Stéphane designed for them 10 years ago,” Martinez said. “That’s the sort of timelessness we are aiming for.”