Surf Stepping Up to Leather Bags

Surf and action sports apparel manufacturers are introducing leather to their handbags. 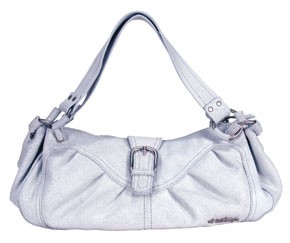 Vintage Handbags From Mark Cross Land on The RealReal

Surf and action sports apparel manufacturers are introducing leather to their handbags.

Although the costlier material isn’t likely to make a significant dent in King Cotton’s reign over the sector’s accessories, it is evidence of select brands’ efforts to reach customers who are getting older and wealthier and covet designer labels.

Fox, which trailblazed into the premium action sports accessory niche with a fake leather $40 Gold Digga style three years ago, is testing the real deal for holiday with a studded crinkled lambskin bag that retails at $200. Fox was encouraged to elevate its prices by the success of the Gold Digga and a purse called Deluxe that sold at surf clothing chain Pacific Sunwear for around $88.

“We are just trying to push things and see how far they go,” said Janelle Corpuz, design director for accessories and footwear at Fox, which houses its women’s design team in Newport Beach, Calif. “Bags are a status symbol. Obviously, the girl who is going to wear it [Fox’s $200 style] wants it to look like a luxury piece. I look to people who maybe would buy L.A.M.B. bags.”

Hurley, based in Costa Mesa, Calif., is delving into calfskin for fall, when it will launch genuine leather accessories produced by licensee Wheat and priced from $50 for a wallet to $120 for the roomiest bag. The brand believes its target 19-year-old customer, old for a surf apparel industry in which tweens and teens are the core consumers, is accustomed to mixing expensive merchandise with its cheaper counterparts.

“She is young enough that she doesn’t necessarily take herself too seriously, but she wants some of her wardrobe to be pretty sophisticated,” said Jenna Wilson, a design director at Hurley. “You have a great spectrum to work with. I see our girl carrying a really cool tote bag and then a really cool leather handbag the next day.”

Even many brands that haven’t yet tried leather bags have been upping the fashion quotient and raising their prices as a result. Billabong, for example, unveiled a patchwork fake leather clutch in its summer designer’s closet collection retailing for $78. None of its other bags for the season cross the $50 retail mark. For fall, Alpinestars is offering a spacious $70 fake leather bag with large cargo pockets and satin lining.

Wilson said Hurley has seen “no sticker shock,” and its early experience has given the brand confidence to continue with leather in future seasons. She acknowledged, however, that the pricy bags are not likely to be a volume driver in a segment where the average accessories retail price point remains less than $50.

“People have been incredibly receptive, and they haven’t blinked when they heard the price,” Wilson said. “It is not for everybody, but the reaction has been much greater [than expected].”

Some surf and action sports brands speculate that the troubled economy creates a good environment for them to experiment with higher-end accessories. The argument is that, with consumers thinking twice about designer bags that run into the hundreds and thousands, they might be searching for alternatives that are less expensive, but still chic.

“There is not really a niche in between our [surf and action sports] brands and then the Marc by Marc Jacobs tier,” Corpuz said. “We wanted to fall in the middle and be cool with crinkled lamb leather and a lot of hardware.”