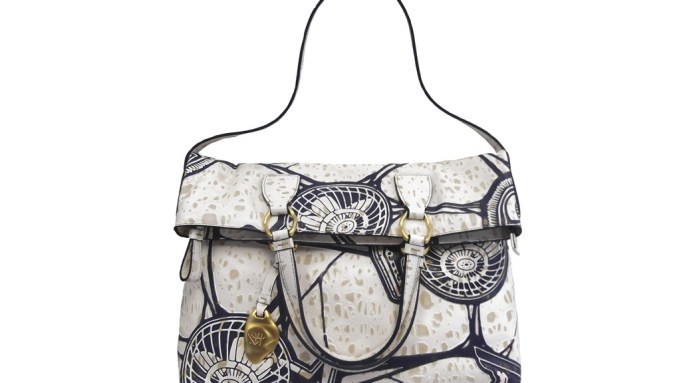 HELMOND, The Netherlands — Vlisco, a 167-year-old Dutch brand as African as zebras, is about to make its international coming out during Milan Fashion Week, which kicks off today.

The maker of bold and colorful textiles, beloved in West Africa for decades, is launching a range of handbags and scarves that it hopes will accelerate its recent transformation into a nascent luxury brand.

“Our aim is that a global consumer loves it and a West African consumer will love it even more because there’s a lot of recognition in it,” said Roger Gerards, Vlisco’s creative director.

The company is targeting a limited number of specialty stores in Europe, the U.S. and the Far East with its first concerted accessories volley — and will showcase them in its fast-growing network of Vlisco boutiques, now numbering 30, in countries including Benin, Ivory Coast, Togo and Nigeria.

Fold-over clutches, totes and bowling-style bags come in cotton-and-silk jacquards as well as embossed and printed leather, while scarves — all large-scale like its prints — come in silks or textured jacquards. One grouping is bright and demonstrative — a table fan among the playful motifs — while another incorporates subdued colors and prints for more conservative tastes.

Products are manufactured in top factories in Milan and Como, Italy, with Gerards scouting like-minded companies to execute Vlisco’s artisanal approach to fabrics.

If a rich brand narrative is gold for a fashion player these days, Vlisco has an entire mine to tap, accruing the status of cultural icon in Africa from a small city in southern Holland — all thanks to a Dutch trader who unknowingly ignited a craze for Javanese batik prints when bartering with locals back in the 17th century. Founder Pieter Fentener van Vlissingen subsequently segued from imitation batiks to high-quality fabrics designed to reflect African tastes, also incorporating their traditions and beliefs into motifs steeped in allegory.

Today, the fast-growing company boasts 2,700 employees and a sprawling production complex that grew from the same spot where the founder first started marketing what is often called Real Dutch Wax prints.

Owned since 2010 by London-based private equity firm Actis, which invests in varied firms in Africa, the company is helmed by Hans Ouwendijk, who previously worked at Laura Ashley and Mexx in Europe. He was also managing director of Fashion Fund One, the Dutch private equity player that in 2007 purchased French swimwear company Vilebrequin, (flipping it to G-III Apparel Group Ltd. five years later).

Actis, which bought Vlisco from troubled Gamma Holdings, tasked Ouwendijk with transforming the company into a brand-oriented fashion player, rather than just a textile designer and manufacturer. “There was no marketing department, no brand focus,” he said in an interview.

Actis set a goal to double the size of the business by 2015-16, a feat Vlisco should accomplish next year. Ouwendijk noted revenues, 169 million euros in 2009, are already approaching 300 million euros, or $400.5 million at current exchange, this year.

While more than 90 percent of revenues are generated in West and Central Africa, the company has started gaining traction in countries including France and the U.K. “In the last two years, we more than doubled our business in the U.S.,” he noted.

Growth, Ouwendijk said, is coming from capitalizing on existing markets; exploiting potential outside its core markets, including in Africa, and expanding the product offer, with the accessories launch emblematic of that.

Vlisco already creates ready-made garments with its fabrics, but largely as a vehicle to express to African consumers and tailors the fashion possibilities of its patterns in magazine-like catalogues or splashy billboards. It still sells its fabrics in six-yard bolts, enough to make a three-piece ensemble. Prices per yard range from about 7.5 euros to 16.5 euros for limited editions, or about $10 to $22 at current exchange.

Gerards explained that the fashion system in West Africa is nearly the opposite of Europe’s, with fabrics, not labor, the most important input cost. African women prize the unique, expressive garments their tailors can realize with Vlisco’s vast array of patterns, he added.

Ouwendijk said the company has recently seen demand for ready-to-wear explode at its younger brand Woodin and “the market is just going to evolve more and more into ready-to-wear.”

While European fashion players ranging from Mango to Ermenegildo Zegna are tiptoeing into Africa, most are operating with franchise partners, and Ouwendijk said Vlisco’s “first-mover advantage” remains a considerable asset.

“We know all the dynamics,” he said, noting that Actis has helped it make further inroads with governments, a key ingredient to success in African countries.

“I see no reason why in the next five years we should not have approximately 100 stores,” Ouwendijk said, noting that retail currently represents less than 10 percent of the business.

According to industry sources, LVMH Moët Hennessy Louis Vuitton and Hermès International, among European luxury players keen on securing rare and specialized suppliers, are keeping an eye on Vlisco, with Actis likely to search for an exit within the usual five- to seven-year investment horizon for a private equity player.

Ouwendijk declined to comment on any potential acquirer, while allowing that the company could see a new shareholder arrive in coming years.

To be sure, Vlisco operates in a vibrant geography, with seven of the world’s 10 fastest growing economies located in Africa, he said. While there is a tiny elite and vast numbers of low-income Africans, “the middle group is expanding enormously fast,” giving consumers greater purchasing power, Ouwendijk said.

“Africa is taking over as the engine of growth for the globe,” he enthused, noting that Vlisco currently produces about 70 million yards of fabric a year.

Gerards, who trained as an anthropologist and fashion designer, seems perfectly cast for his role at Vlisco, overseeing a design department numbering 43, including 17 textile designers, and culling inspiration from an archive of more than 300,000 textile references, with swatches and original drawings all meticulously catalogued.

The designer led a quick tour of the company’s spotless facility, showing rolls of cotton being dipped in indigo, passing through such a bath as many as nine times to accrue a rich and lasting color. Etched copper rollers apply the wax that gives fabrics their intricate designs, and Gerards noted all fabrics are printed on both sides and pass through 36 production steps before they can receive their Vlisco seal of authenticity and get wrapped in jute for shipping by container.

While Chinese makers flooded the West African market in the past 10 years with cheap, screen-printed versions of its designs, Gerards said only Vlisco can boast a multilayered design approach — as alert to the social, historical and cultural narrative in the prints as their resonance with current trends — and an artisanal production process that still sees colors printed one-by-one. The wax technique produces irregularities that are as prized as the vivid pop of large-scale and asymmetric motifs.

“You get the honesty of the technique, which is part of the image,” Gerards said, noting that each print takes about a month in order to realize “the best composition for the eye.”

Vlisco produces four collections of textiles a year, defined by themes and color stories Gerards sets rather than by seasons. “Most of the inspiration is the brand itself,” he said.