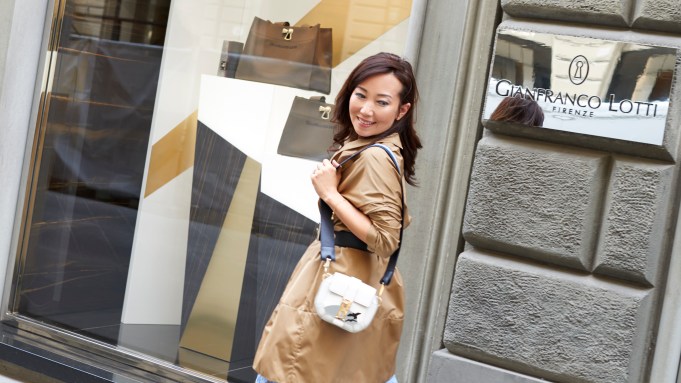 The cluster of leather handbags and guitar-style straps that she designed with Florentine craftsman Gianfranco Lotti will be introduced to 170 nations in early December via Net-a-porter. The official launch is set for Dec. 7 at a social luncheon at the Rosewood Mansion on Turtle Creek hotel.

“They bought it for Europe, Asia, the Americas,” Craig noted. “It was very humbling when I saw the order because it shows the level of trust and belief they have in my brand. I teared up.”

Craig has chronicled her handbag obsession for 11 years on the Bag Snob web site. She codesigned five bags with DKNY in 2011 and then a better-priced line that was sold on HSN, which were both affiliated with Bag Snob. This her first foray into luxury.

“This is the space I’m most knowledgeable in, and I hope people will respond well to it,” Craig noted. “It came from my heart.”

The bags’ colorful side panels were inspired by the freedom and joy she felt as a child riding her bike all day until dusk along the coast in Los Angeles. They depict birds on the wing, a sunset and stripes — all rendered in hand-cut and sewn calfskin.

“Last year, when I was designing this, there was so much uncertainty and the world was in turmoil with attacks,” Craig explained. “I wanted to find a time that was joyful for me, when I could just get on my bike and go explore. It was a carefree time, and that’s what fashion is supposed to be. It’s supposed to be joyful and bring happiness and passion to you.”

Tina Craig for Gianfranco Lotti offers three structured silhouettes, one of which is eight sided in homage to the Chinese belief in the good fortune of the number eight. Each bears two of Lotti’s signature sideways keyhole clasps. There are also three patterned straps, including an intricate design that references an old Florentine gate.

“They are so different to anything else that we have, and that’s what Tina is so amazing at,” said Billie Faricy-Hyett, senior buyer of bags, accessories and jewelry at Net-a-porter in London. “We love the references to her childhood and all these gorgeous colors. Obviously the quality is amazing, and the look so designer.”

Craig met Lotti a year ago when she was invited to the opening of his flagship in Florence and given the opportunity to design her own bag through his One in the World custom program, which she chronicled on her blog.

Lotti hopes the collaboration with Craig and Net-a-porter will raise the profile of his brand and atelier, which has been producing fine handbags for 45 years for leading European brands. It also gave a jolt of energy to his own label, which has been primarily traditional and classic.

“I like very much to marry my ideas with hers and to try to make something very new,” Lotti said. “This is made by hand and it’s very difficult to produce and unique. It’s exciting for us.”

Gianfranco Lotti has been expanding since its acquisition in 2013 by the German fund Halder. It opened its first boutique in Paris in 2014, followed by Florence; Milan; Dubai; Doha, Qatar; Chongqing, China, as well as two in Seoul.