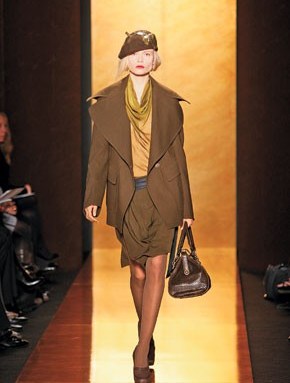 Another whirl of fashion shows has come and gone, and once again the runways from New York to Paris were as much about the handbags and other accessories as they were about the clothes.

But the Americans still have a lot of catching up to do, despite accessories taking center stage at shows such as Ralph Lauren, Michael Kors, Marc Jacobs, Badgley Mischka and others.

“Europeans are clearly dominating handbags right now,” said Robert Burke of Robert Burke Associates, a consultancy based in New York. “It’s hit or miss in the American market and I feel as though designers are pushing it all a little too hard. It’s like I’m being force-fed.”

Europe has had the luxury handbag market locked down for years. Louis Vuitton built an empire around the handbag, as did Hermès and Gucci. The firms all own and operate their own tanneries and factories in Italy and, with their deep pockets, can buy the best skins to produce bags for Dior, Vuitton and Givenchy, owned by LVMH Moët Hennessy Louis Vuitton, and Balenciaga, Bottega Veneta, Gucci and Yves Saint Laurent, owned by PPR.

But if the runway is any indication, American designers — from the old-school to the new — want in on the luxury handbag market in a big way, even if competing in the category means new strategies and branding efforts that distinguish their bags from their clothes and those of their competitors.

Marc Jacobs probably is one of the most successful American designers in the handbag field, having generated buzz in the category since he launched accessories in the year 2000. That he had been designing for Louis Vuitton three years before launching his Collection handbags set a high bar for his American peers.

“We both started working at Louis Vuitton in 1997 and learned how to make bags,” said Robert Duffy, president of Marc Jacobs. “So our Collection bags were a result of that education. We didn’t know anything about making handbags, but we met the hardware people, met the people in the tanneries, so we learned. We were very lucky.”

Duffy estimates that Jacobs’ Collection handbags bring in about $150 million in sales annually.

Santiago Gonzalez, president of the Cali, Colombia-based accessories firm Nancy Gonzalez, credits Jacobs with being one of the few American designers whose bag business is an independent enterprise.

“Marc is so successful because his accessories line is not an extension of his [ready-to-wear], it stands by itself,” Gonzalez said. “One mistake American rtw designers make is by making it a part of their rtw and it’s not. Accessories need to stand by themselves. Bags are sold and bought through accessories buyers and sold in another part of the store.”

Ed Burstell, senior vice president and general merchandise manager of jewelry and accessories at Bergdorf Goodman, agreed that American rtw firms need to separate the businesses, but also figure out their place in the market.

“I always ask designers, ‘What’s the point of view in this collection and how is it different?’,” Burstell said. “American design tends to be quicker and more disposable, but the prices aren’t. It’s all about doing things differently that can stand the test of time and can stand on their own.”

Michael Kors is looking to build an independent accessories business and opened its own series of accessories boutiques beginning in August 2006. Kors and his company’s owners, Lawrence Stroll and Silas Chou, hope to build a $1 billion brand with 100 lifestyles stores where three price levels of accessories comprise 75 percent of the retail offerings.

“We have seen such an incredible response in all of our retail stores by having both MMK and Collection handbags available,” Kors said. “The price-point range allows for a wider variety of clients.”

Donna Karan International, owned by LVMH, is relaunching its accessories division for the pre-fall season. LVMH has said it wants to establish DKI as a true accessories brand. According to Mark Weber, chief executive officer of LVMH Inc. (U.S.) and chairman and ceo of DKI, there might also be stand-alone accessories stores one day to establish the category as an independent business.

Another potential issue is that a majority of American designer brands have added lower-priced lines as opposed to European houses that offer single luxury collections. While the broader price offering can widen their distribution, it also can muddy the image of the brand in the competitive accessories world.

“The exposure level is definitely something that would differentiate these two markets,” said Suzanne Hader, principal at 400twin Luxury Brand Consulting. “A lot of American brands have [accessories] bridge lines. While they are lucrative, that’s the bargain. The more exposed you are, the more stuff you can sell, but luxury has to do with exclusivity. If everybody has access to a label, then certain people aren’t going to want it and the price tag isn’t going to be worth it.”

Brian Bolke prefers accessories by brands that are under the radar. The co-owner of 4510, the high-end boutique in Dallas, sells handbags exclusively by European firms.

“Givenchy and Marni are our bestsellers,” Bolke said. “We used to carry some American brands, but the saturation in the marketplace became too great. There’s a fine line between being an insider’s bag and an everyone bag.”

But Duffy contends that the Marc by Marc Jacobs contemporary line has not hurt the firm’s business.

“It’s had absolutely no effect at all,” Duffy said. “I’ll see it in different stores on a completely different customer. The premise of our company from Day One was that we wanted to address a broader consumer base than just designer.”

Europe’s premier accessories houses haven’t had a problem going in the opposite direction. Brands such as Balenciaga and YSL have been rediscovered in the last five years through their stellar accessories, which helped in bringing the rtw back into the minds of the collective conscience.

“I think it’s probably easier to start with the leather goods,” said Lisa Montague, chief operating officer at Mulberry, a British accessories brand that has experienced strong growth in the last three years and is extending into apparel. “Many big design houses have come through that way. It’s a formula that you can see repeating itself.”

Mulberry is one example of how British firms are becoming contenders in the handbag business. Anya Hindmarch also has seen strong growth in the U.S. and abroad. Like Mulberry, the British firm started out with handbags and only recently began adding a small selection of apparel. According to Hindmarch, American designers should start taking bolder steps.

“When you think of fashion, you think of change in design,” Hindmarch said. “When I look to American designers, I think it’s more commercial. Directional is not the first word that comes to mind. There’s also a huge shift in America with department stores. I do a lot of business here with Neiman Marcus, Saks Fifth Avenue, Nordstrom — it might be a slightly more conventional market than dealing with smaller specialty boutiques.”

But if the U.S. is ever to establish itself as an accessories leader, perhaps the fashion community needs to reassess its point of view. While major designers such as Ralph Lauren have had significant success in accessories, they still represent the minority of their business. European brands like Vuitton and Gucci, on the other hand, get the bulk of their sales from accessories.

“Big names here, like Ralph, Donna, Calvin, they are based in rtw and extended into accessories as a secondary manner, and the American buying community thinks of it that way,” said Frank Zambrelli, president and creative director of Leiber. “We need to realign our prioritization as an American industry to put forth as much effort in accessories as the Europeans have.”

The industry may be recognizing that designers such as Calvin Klein, Oscar de la Renta, Carolina Herrera and Vera Wang are increasingly focusing on their accessories businesses, as are firms such as Theory and Elie Tahari. Meanwhile, the younger generation of designers such as Phillip Lim, Zac Posen and Derek Lam (who’s also creative director of Italian brand Tod’s) sees it as a huge potential gold mine.

“We’ve invested heavily into our accessories business in terms of production, design, luxury and innovation,” Posen said. “Bags can be designed anywhere, but it’s about creating classics.”