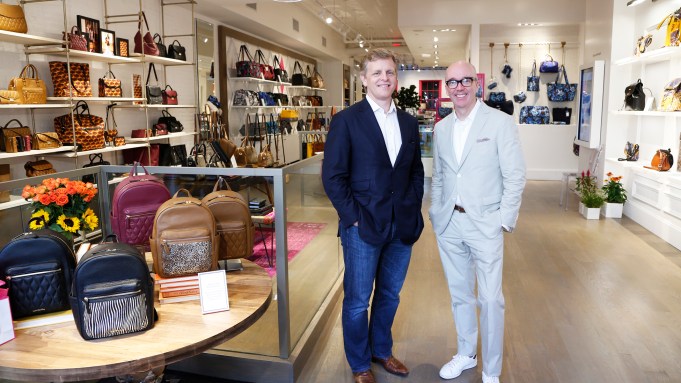 Vera Bradley is eager to climb out of its rut and ultimately double its annual sales to $1 billion.

While Thursday’s second-quarter report isn’t likely to reveal much, if anything, in the way of growth, the tide could soon turn.

For nearly three years, Vera Bradley has been laying the groundwork for improvement, overhauling everything from the supply chain to distribution, operations, senior management and the assortment. Recently, there’s been an influx of products and categories including footwear and leather goods; wholesaling to department stores was expanded, and last Thursday, a feisty re-branding campaign, “It’s good to be a girl” was launched. There’s also a new scripted diamond-shaped logo, as a nod to Vera Bradley’s heritage in quilting.

In October, the company will convert its web platform, primarily a liquidation channel, to a “digital flagship” with executives promising richer content, videos, greater product information and customer interaction, improved functionality and less discounting. Order online, pick-up-in-store and PayPal are  being integrated. The site generates about 25 percent of revenues, which last year totaled $502.6 million, compared to $509 million the year before.

Also in October, nine “World of Vera Bradley” shops will launch inside of Macy’s stores.

As part of the lofty goal to exceed $1 billion in sales, licensing agreements for home products are being pursued, and international expansion is under consideration, though no overseas plans are set. Japan, through a licensing arrangement with Mitsubishi-Look, is the only country outside the U.S. where Vera Bradley products are sold.

In another profile-raising move, Vera Bradley’s first New York store opened in SoHo on Thursday, at 411 West Broadway between Prince and Spring Streets.

“By the end of this year, we expect to see some growth, and continuing into next year we expect to see the growth accelerate,” Robert Wallstrom, chief executive officer of the Roanoke, Ind.-based Vera Bradley, told WWD. “As we get into the following year, that will even ramp up more as we get new categories in place.

Since Wallstrom came on board almost three years ago after serving as president of Saks Off 5th, he’s led a comprehensive effort to modernize Vera Bradley and cast it as a lifestyle brand. Though it’s been most widely known for its handbags, particularly colorful, floral-patterned cotton quilted bags, there is also luggage, duffel bags, accessories, gifts, jewelry, eyewear, stationery and fragrances in the assortment. Surprisingly, the $49 throw blanket (one of just a handful of home items offered) is the number-one seller, encouraging the company to get deeper into the home category. Footwear, while limited to rain boots, flip-flops and canvas slides, is another potential growth area.

Asked if apparel is required to create a true lifestyle brand, Wallstrom replied, “It can enhance it, but I don’t think you need it. It’s something we would look at but, again, what we ask ourselves is, how do we bring something different into the marketplace. Not just a different design, but it’s this idea of bringing beautiful solutions into the apparel space and we haven’t found that answer yet.”

In other areas, “We have a lot of unique new licensing opportunities coming up. Home is such an expansive category, between bedding, tabletop, rugs. We will begin some of that this year in terms of finding partners and continue to work through next year on that.” On the other hand, “Our intention is to do footwear directly.”

With product development, it’s the idea of creating “beautiful solutions” that Wallstrom mentions more than once. That’s Vera Bradley speak for developing products with innovative and practical features, like the brand’s ultralight wheeling luggage, collapsible luggage for easy storage, travel bags readily identified as carry-on-compliant, or bags with compartments to conceal cell phones and wallets.

“We are not just looking at making fashion footwear, which is what a lot of people do,” Wallstrom explained. “It’s the type of footwear that women really need.”

It wasn’t a turnaround situation that confronted Wallstrom when he joined Vera Bradley. “I was really brought in to help the company get to its next stage of growth,” he said. “The growth had slowed. We lacked innovation in product. There was a great balance sheet, but we used the word ‘stalling’ a lot. We continued to create the same type of product for too long. Vera Bradley still had incredible loyal customers and a dominant share of the market being number-three in the bag business in terms of units,” behind Coach and Michael Kors as of 2105. “We had such a stronghold in the campus business, and such a stronghold in the north-of-40-year-old business, but we were underpenetrated in the middle.”

Research indicated women still liked the brand, but it was losing relevance to their lifestyles involving careers or going out at night. The quilted bag didn’t fit in as much.

Wallstrom overhauled the majority of the senior staff, brought in a chief merchandising officer, heads of design and supply chain and a chief marketing officer, among other positions. Some talent was retained, such as the chief information officer, and Vera Bradley’s cofounder, Barbara Bradley Baekgaard.

“Barb is really kind of the chief creative officer,” Wallstrom said. “She likes to say she’s the chief tweaking officer. She’s able to look at everything coming together and determine if it really aligns with the Vera Bradley brand and what we know about the consumer.  She is what I would call ‘the final editor.’ Some designers are very yes-no, yes-no. Barb doesn’t edit the line that way. She asks questions. ‘Why are we doing this? Should we be doing it differently?'”

On the product side, three collections — leather, “Preppie-Poly” for solid nylons and “Streeterville” for refined looks — were built into the assortment. Forty percent of the business is in handbags, home and jewelry; 30 percent is travel, and 30 percent is campus, such as backpacks.

In addition, the focus was put on marketing and building distribution, so now Vera Bradley is sold in 275 Dillard’s stores, about 250 Macy’s doors, 40 Belk units and 43 Bon-Ton locations. “We are laying a good foundation in that midtier department store group,” Wallstrom said.

At nine Macy’s doors, 420- to 720-square-foot “World of Vera Bradley” shops will open by the end of October. “Traditionally on the handbag floor, all you have is handbags. But at Macy’s, this is where we will bring together all the categories,” Wallstrom said.

At the 2,700-square-foot SoHo store, which is 1,000 square feet larger than the average Vera Bradley unit, “We wanted to maintain the feeling of SoHo while blending in the heritage of Vera Bradley,” explained Harry Cunningham, head of store development, who along with Wallstrom gave a tour of the store last Friday.

“The idea of community is so important,” said Cunningham, who pointed to the planters outside arranged by plant artist Satoshi Kawamoto of Green Fingers Market, who goes by Satie San; the “grizzly gray” landmarked exterior, and the tall, wide windows providing views and light right through the store, as inviting elements. The exposed brick walls and pipes, and the tin ceiling, all typical of old SoHo buildings, have been retained, and the interior is sprinkled with whimsy and artwork.

The store is amply merchandised with, among other items, lilac tapestry and java floral totes, priced at $49 and $86, as well as dressier solid quilted satchels, priced at $258, and some less expensive print satchels. Quilted microfiber laptop totes, priced $118, are among the bestsellers. As if the products weren’t bright enough, there’s LED lighting, handblown glass pendant lighting by Hennepin Made, and Osborne & Little floral-butterfly wallpaper on the transoms to mimic the colorful print handbags. Several are displayed on floating wall systems, and the checkout area is counterless so there is more interaction between customers and associates.

There’s a ping-pong table used for display in “the game room” evoking a bit of Vera Bradley lore. In 1982, Baekgaard and her friend Patricia R. Miller started the company (named after Baekgaard’s mother) after traveling together and sensing a void in the market for feminine luggage. The original quilted cotton luggage, handbags and accessories were created on a ping-pong table in Baekgaard’s basement.

“As we begin to expand internationally, we felt getting a store into New York was really critical,” Wallstrom said. SoHo is also “our first true street store,” and more on main streets in Manhattan and elsewhere could open. “Obviously, the Rockefeller Center area would be great. So would 34th Street. What’s important is we don’t have to be in the center of luxury retailing. We have to be where the average consumer is. The Upper West Side would be fantastic.”

There are 112 full-line Vera Bradley stores and 44 outlets. “Long-term, there is an opportunity to easily double our full-line store count,” Wallstrom said, though not overnight. “We are taking growth slowly. We are concerned with what’s happening in the malls in the U.S. We have slowed down our full-line growth until that traffic begins to stabilize.”

Instead, “unique properties” like the opening in Disney Springs, Fla., earlier this year are being sought. It’s emerged as the top volume unit in the chain, generating a bit over three times the average, Wallstrom said. “It’s a great example of where there’s traffic.”

On the marketing front, the company is getting aggressive to promote the SoHo opening and get the word out about product changes. Manhattan’s subway shuttle from Grand Central Terminal to the Port Authority will be wrapped in Vera Bradley ads, as will double-decker buses on three routes. There’s also a sponsorship with the Madison Square Garden concert series beginning Sept. 22, including Adele and Carrie Underwood.

The  marketing campaign take a two-pronged approach with first, a broad, integrated media buy with a mix of print, social, and digital video. Secondly, there is a social content series with sharable short videos featuring Noel Wells from Saturday Night Live and Masters of None. Noel will be speaking to a variety of women including some of her celebrity friends asking them how femininity is an asset and why they love being a girl. The campaign and content series aim to get women talking about and sharing reasons why “it’s good to be a girl” via social media and the Vera Bradley website.

“We’ve got all these tactics to make sure there’s this contagious energy,” said Theresa Palermo, chief marketing officer. “It will culminate at the end of October with a final celebration and media blitz.”

“You are going to see Vera Bradley pop up in New York in a lot of exciting ways through advertising,” Wallstrom said. “We really want people to see who Vera Bradley is today.”