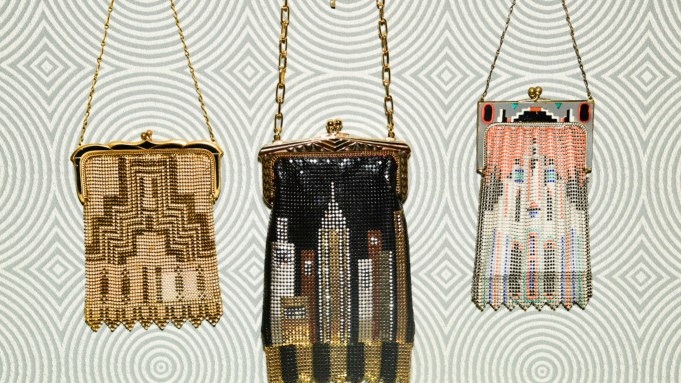 In celebration of its 140 years in business, Whiting & Davis has designed a special Heritage collection of handbags, inspired by president and creative director Inge Hendromartono’s private collection of vintage bags, all made by America’s oldest handbag company.

Inge’s tenure began when she and her husband Christopher bought the handbag division of the metal mesh manufacturer Whiting & Davis in 1999. She had begun collecting well before that though, gathering bags from antique shops and dealers and, more recently, eBay. She believes some of her finds came, in fact, from the now-defunct Whiting & Davis museum.

The company traces its roots back to a sterling silver jewelry manufacturer, cofounded by Edward P. Davis in 1876. In 1892, one of his employees, Charles Whiting, created the first mesh handbag, adapting the ancient art of weaving metal into a fine fabric. By 1896 the two men had partnered up, forming Whiting & Davis. In 1912, they patented the technology of manufacturing the mesh on machines, which allowed production to dramatically increase.

While Inge’s collection, which was on display Wednesday at the Inn at Irving Place, focused on the Twenties and Thirties, some pieces dated even father back. (While being interviewed by WWD, she discovered that the date engraved on one sterling silver bag was — coincidentally — June 15, 1902.) Some of the styles have secret compartments; many are tiny by today’s standards. According to Hendromartono, at best women needed to carry only a face powder compact, a handkerchief, lipstick and perfume in a small bottle or box, which she referred to as a “vinaigrette.” “Presumably not the kind for salads,” she quipped.

The collection also included Chatelaine ring bags that either attached to belts or were worn on a ring finger; a double vanity case, called a Princess Mary, celebrating the wedding of King George V’s only daughter in 1922; and a Thirties Mickey Mouse bag, thought to be for a child.

For the limited-edition Heritage collection, the designer created five styles, including Skyline, which is based on Art Deco armor chain mail bags whose handpainted designs mimic the New York skyline; Chandelier, based on an Art Nouveau style, which has a V-shaped base; Victorian Stripe, which features a step-patterned fringe. These three are “more contemporary, as they can carry the iPhone 6 Plus, among other things,” according to Inge and can be worn cross-body. The two others are the Poiret pouch, a modern interpretation of a Twenties collaboration with famed Parisian designer Paul Poiret (a very forward concept at the time); and the Deco Crystal Point, a classic mesh frame bag with crystal fringe referencing the Turkish mesh brand Mandalian, which Whiting & Davis acquired in 1944.

All the bags were displayed alongside each other, to show both the old and the new. Available starting August 25th, the Heritage bags will retail from $298 to $425.