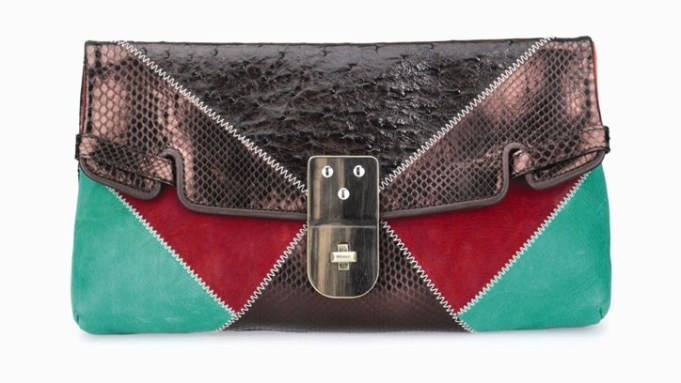 Matthew Williamson is taking his signature collection to new heights.

The British designer, who is showing his collection today at the Bryant Park tents, is focusing all his attention on his 11-year-old namesake brand. Williamson, who sold a 22 percent stake in his company in August 2007 to TSM Capital, will step down as creative director at the LVMH Moët Hennessy Louis Vuitton-owned Emilio Pucci after the brand’s spring runway show in Milan later this month.

As part of the growth of his own brand, Williamson will launch his first complete line of accessories for spring, including handbags, footwear, belts, jewelry and eyewear. There are plans to open Matthew Williamson stores in New York’s Meatpacking District in January and another in Dubai. The firm already has a store in London. Williamson’s spring ready-to-wear collection is his largest to date, with 48 looks.

Jean-Manuel Pourquet, senior vice president and managing director of Matthew Williamson, projected that accessories would comprise 25 percent of the brand’s sales within a year. The company has sales of about $20 million.

Williamson has done some accessories for his brand in the past, but this is the firm’s first serious push into the category. “I approached it in the same way as the ready-to-wear. [The theme is] a continuation of last season’s relaxed bohemian glamour,” said Williamson of designing accessories. “It’s a similar discipline and process as the ready-to-wear. What’s different about accessories is the lead time. My factories are already asking me about fall [2009].”

“Why this collection is so important is because of our U.S. strategy,” said Pourquet. “We’ll have a room in our New York store for accessories and a special room just for bags.”

There are plans to wholesale the collection for spring, but in a limited way. The goal is to bring accessories into current wholesale accounts such as Bergdorf Goodman, Neiman Marcus and Saks Fifth Avenue, as well as smaller boutiques such as Hirshleifer’s in Manhasset, N.Y., and Wynn & Co. in Las Vegas. The U.S. represents 22 percent of the firm’s sales, while the U.K. takes the lion’s share with 26 percent. Europe, Russia and the Middle East account for the rest.

The handbags, shoes, belts and some jewelry are designed in-house. The leather goods are made in Italy. All are done in Williamson’s signature electric colors. There are soft clutches done up in fuchsia and burnt orange snakeskin patchwork. Minaudières are offered in a signature print with a pink resin fob closure. Bags will retail from $800 to $5,000 for an exotic skin style. There are high-heeled platforms and flat sandals that will retail from $700 to $1,200.

Some of the jewelry, such as embroidered and beaded necklaces and brooches, have been designed by Williamson, while some of the crystal chunky necklaces have been designed by Xenia, a freelance German designer whom Williamson tapped to do some work for Pucci in the past. Jewelry will retail from $300 to $1,800, belts will go from $400 to $900 and scarves will sell from $250 to $500.

Eyewear was made in coordination with British eyewear maker Linda Farrow.