The rebound in business and strong results have brightened the mood of men’s wear stores about the upcoming fall season. 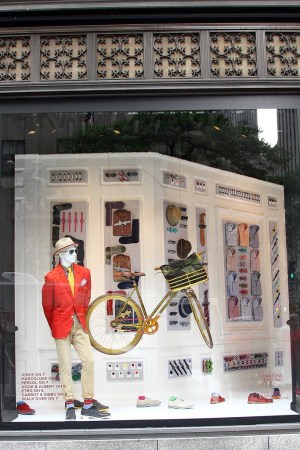 Serena Williams Takes a Fantasy Trip for New Away Collection

The first quarter of 2013 was no picnic for men’s wear retailers as unpredictable weather patterns and continuing economic uncertainty took a toll on business. But the situation started to turn around in May, and customers returned to the stores, providing merchants with a much-needed uptick just in time for Father’s Day. As a result, sales were strong for the holiday, with accessories, dress shirts and other traditional gift items leading the way.

The rebound in business and the strong Father’s Day results have also brightened the mood of men’s wear stores about the upcoming fall season, with most retailers anticipating a strong second half.

The National Retail Federation, in its annual spending survey conducted by BIGinsight, projected that the average person would spend $119.84 on Father’s Day gifts this year, up from $117.14 last year. Total spending was expected to reach $13.3 billion. Apparel was expected to account for $1.8 billion of that spending.

“It was a very good Father’s Day,” said David Fisher, executive vice president and general merchandise manager of men’s wear for Bloomingdale’s. “It looks like we’ll be up in the single digits.”

Although comparisons with last year were impacted by a shift in the promotional calendar, Fisher said he was pleased with the results. “We broke price in clothing in May so sport coats and slacks were good,” he said, adding that nested suit sales were “just OK.” Canali, Burberry, Corneliani and Hickey Freeman were among the top performers, along with Armani, “which is coming back.”

Fisher said denim sales were up, but not to the “level I wanted.” However, contemporary sportswear and the emerging brands in the retailer’s Lab department were “terrific.” He also singled out John Varvatos along with its Star line, Burberry sportswear, Theory, Hugo Boss and Vince as among the best performers for the pre-Father’s Day period. “We developed some key items from Vince for Father’s Day, and it paid off,” he said.

He said accessories and men’s jewelry sales have been good and neckties have been outperforming dress shirts. “We’ve seen a big uptick in socks, small leather goods, sunglasses and bags — the big gift items,” he said. “And ties have been better than dress shirts all season.”

Looking ahead, Fisher said the future appears bright. “It was a tough quarter for everyone, but things opened up in May, so it looks good. We have so much ammunition for fall, with our British invasion and the whole Beatles thing.” Bloomingdale’s for fall will pay tribute to the U.K. through a storewide celebration it is calling “Brit Style.” The promotion will be national in scope, but the men’s area has embraced it in a particularly aggressive way, partnering with more than 40 British brands to produce exclusive merchandise.

“And the fall collections were awesome,” Fisher added, noting that Burberry, John Varvatos and Vince all presented strong lines. Ralph Lauren is producing some exclusive product for the retailer under its Polo label. “We’re going to have a certain amount of product that is not available elsewhere,” he said, “so that helps us differentiate.”

Saks Fifth Avenue was also pleased with its Father’s Day business. It was good,” said Tom Ott, senior vice president and gmm of men’s. “Business just kept getting better and better as the season went on.” He said the company’s “story this year is about accessories.” Featured product included everything from sunglasses and hats to “pocket gadgets” including pens and lighters. Cuff links, tie bars, lapel adornments and colorful patterned socks joined pocket squares, watches and bracelets in the store’s Father’s Day catalogue this year.

Outside of accessories, Ott said premium denim has also been a standout. “It’s probably our best trending business in men’s,” he said, noting: “We’ve really been going after it.”

The tag line for the season was “Little Things Make a Big Difference,” and Saks partnered with St. Jude Children’s Research Hospital over Father’s Day weekend to donate 5 percent of men’s purchases to the charity. The initiative kicked off Thursday night at the flagship when former NBA stars Kevin Willis and Walt Frazier appeared in the store on behalf of Willis’ big & tall men’s wear collection, Willis & Walker.

Eric Jennings, Saks’ men’s fashion director, said repeating last year’s success over the Father’s Day period was tops on everyone’s mind. “It was all hands on deck,” he said, “to figure out a singular vision on how to execute it.” The result was to “gather thousands of little things” that would be “showstoppers” for customers. The store also used its Fifth Avenue windows to showcase the accessories products in an intricate and creative way. “I’ve never seen more men or women stopping to look and take pictures,” Jennings said. “We’re making the little things big. Little accessories can really make a difference in a person’s style.”

Ott said the strength of the Father’s Day business buoyed his spirits for the remainder of the year. “I hate to blame the weather, but the warm winter and cold spring in the Northeast really hurt sales, but when the weather changed, people started to shop. The male consumer is really a buy-now, wear-now shopper.”

Jennings agreed. “Men’s wear has been so steady and consistent over the past five years. Men are more engaged in their appearance, and that shows in the numbers.”

He said while clothing and personal accessories such as belts, shoes and small leather goods were “bright spots” and “up to last year,” traditional furnishings such as dress shirts and ties, along with sportswear, were “very disappointing.”

Amendola said sales of clothing continue to be driven by young guys seeking slimmer suit silhouettes, “but Father’s Day and gift-giving are not about tailored clothing. They’re more about shirts, ties and sportswear. In those categories, there are a lot of options out there and a lot more choice of price.”

As a result, he continued, “The four-letter word to describe the spring season is ‘sale.’ It’s one of the drivers. Either that, or the customer needs a reason to buy, like our Gatsby collection. It either has to be distinctive and special or driven by a promotion.”

Although Brooks Bros. managed to meet last year’s numbers, Amendola said the end result was “nowhere near plan or where we would like it to be.” As a result, “we have an extremely conservative plan for fall,” he said. One positive, however, is that inventory levels are in line “so there won’t be any panic. But there’s also no sustainable momentum.”

Durand Guion, vice president and men’s fashion director for Macy’s, said there were several highlights for the Father’s Day selling period. “We’re in the middle of our American Icons promotion, and a lot of that product was popular,” he said, pointing to graphic T-shirts and short-sleeve wovens in an updated red, white and blue palette.

“Then there was the buzz leading up to the U.S. Open,” he added. “That pushed the whole golf category forward.” Top performers included polos in performance fabrics and bright colors and patterns.

Color is also making its mark in footwear, with suede driving moccasins and boat shoes selling in updated hues such as gray. Other top sellers for Father’s Day included flat-front shorts in seasonal colors, linen in neutral shades and tropical patterns, bold colored dress shirts from Alfani Spectrum (available in up to 24 shades) and bow ties. “The bow-tie momentum continues,” Guion said, as does the interest in socks and pocket squares.

Looking toward fall, Guion said he’s “very excited about the trends. There will be more saturated colors and that will continue to drive newness. That’s what’s working and we see that continuing into fall.”

Kevin McLaughlin, cofounder of the J. McLaughlin chain of preppy specialty stores, said Father’s Day sales rose in the double digits at the company’s 70-plus stores. “But it was late. It seemed like people stopped at the store on Sunday on their way to Dad’s house,” he said with a chuckle.

What they purchased were novelty items. “Conversational ties, embroidered shorts, brightly colored swimwear and the accessory of the moment: thematic, patterned socks. It was nothing too serious.”

This trend is expected to continue into fall. “It tells me we have to have a level of novelty in everything we do,” he said. “People come to us for things that are different in some way, and we have to stay on that track.”