The new luxury look for leggings, by designers like Helmut Lang to Alexander McQueen, are a long step from the Eighties trend. 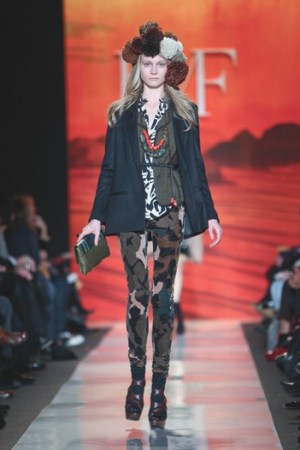 Leggings are growing up.

This story first appeared in the April 27, 2009 issue of WWD. Subscribe Today.

It’s the trend that keeps on giving, even though industry insiders predicted it would be long gone by now. The legging is gaining importance at retail and transitioning from a basic black accessory popularized in the Eighties to a fashionable part of a contemporary wardrobe.

Sensing a desire from consumers for versatility and comfort, contemporary and high-end designers are branching out with novelty styles and luxurious materials, such as cashmere and Italian leather. The new legging is a far cry from the cotton or spandex staple of yesteryear, and consumers are willing to pay the price.

“Women today are investing in pieces that take them through seasons, and our leggings definitely do that,” said Lori Kaufthal, vice president of sales at Helmut Lang, whose leather and suede pairs retail for up to $875. “Women can wear them under a dress or a great shirt or a boyfriend blazer, and it makes sense. Women want clothes that make sense in their wardrobe.”

Kate Ciepluch, fashion director at Shopbop.com, cited Helmut Lang leggings as top sellers, as well as ripped pairs by fledgling brand Leyendecker, which at a $125 price tag has seen almost 100 percent sell-through. Additional trends within the category include sequins, floral patterns and denim.

“This season, leggings have definitely gone more fashion-forward and our business is really strong,” said Ciepluch. “More people who thought they could never wear them are turning to them. They’re more comfortable than pants, and some jeans can’t give you that skinny, narrow leg.”

Ciepluch also noted leggings with special details, such as studding or equestrian stirrup bottoms, have seen little to no price resistance among consumers.

Jessica Moss, president and co-designer of Leyendecker, said her leggings have become a “cult hit” among trend-driven shoppers.

“We like to keep it special,” Moss said. “If you want basic leggings, you can get them from people who do basic leggings. We offer something fun and special. They are more expensive, but, to be fair, they are made in the U.S. and hand-ripped.”

Luxury firms such as Stella McCartney, Rick Owens, Alexander McQueen and Ports 1961 have also added leggings to their retail offerings. McCartney’s top out at $1,495 for a sequined pair, while Ports offers a cashmere style at $525.

“Our leggings are a piece of affordable luxury and a great way to layer,” said Elizabeth Colletta, vice president of sales at Ports 1961. “They are faring strongly at retail, and we’d certainly like to keep it going for as long as customers are reacting to it. Between the response at wholesale and retail, it’s definitely something we plan to continue.”

Alice + Olivia designer Stacey Bendet added more details to her classic legging, such as leather panels and suede. In a troubled economy, women are buying sexier items and those with added value, she said.

Ann Watson, vice president and fashion director at Henri Bendel, picked up the brand’s $728 leather leggings for fall, as well as leather styles by Elise Øverland and knit pieces by Diane von Furstenberg and Missoni.

“There are very few items that can hit this sweet spot of fashion meets function and are accessible to most body shapes,” Watson said. “Those are the items that become ‘must have,’ and they are key items you can run with.”