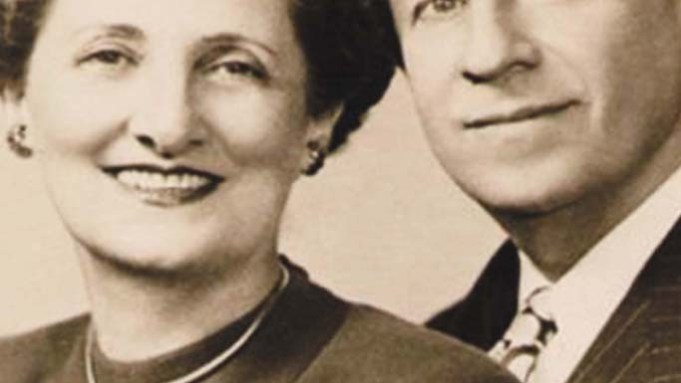 1930s: At the urging of Theresa Hyman, Echo becomes the first scarf company to print its logo on a scarf.

1949: Paul Roberts, who is engaged to Dorothy Hyman, daughter of the founders, joins the company. The couple marries a year later.

1956: On July 25, the steamship Andrea Doria sinks on a transatlantic voyage with Echo’s entire fall line. The companies that manufacture the line in Italy work through their summer vacations, and replace the entire shipment.

1960: Echo starts creating bold graphic designs that would become one of its signatures.

• During the Sixties, the company expands distribution to Canada.

• Elsie Lewis, sister of Theresa Hyman, serves as president throughout the decade.

• The company expands distribution to Europe.

1974: Inspired by a request from the Smithsonian Institution to create a replica of an 1876 World’s Fair commemorative scarf, Echo launches its custom design division.

1976: Lynn Roberts, daughter of Dorothy and Paul, joins the company. She is currently vice president of advertising and public relations.

1978: Dorothy Hyman Roberts becomes president and ceo upon the death of her husband, Paul.

1987: In partnership with Iman, the company produces kikois, which are similar to sarongs with diverse patterns and stripes, using authentic fabrics from Kenya.

2003: The firm partners with Molly Sims and Joy Behar to create scarves to benefit the Ovarian Cancer Research Fund.

2006: A beach line is introduced with cover-ups, pareos and beach bags.

2008: Echo brings “touch” gloves to market, which incorporate a special fabric that allows operation of touch-screen devices without exposing the fingertips.

2009: Dorothy Roberts is inducted into the Accessories Council Hall of Fame.

2010: The firm introduces a swimwear collection to coordinate with its beach line.

2011: Dorothy Roberts is presented with the Leader of Innovation Medal at Philadelphia University’s Evening of Innovation.

2012: Charlie Roberts, representing the fourth generation of the family, joins as a management trainee.

• The company marks its 90th anniversary.