For fall, the accessories and home design brand will roll out a new logo, signaling a shift in branding and marketing strategies. 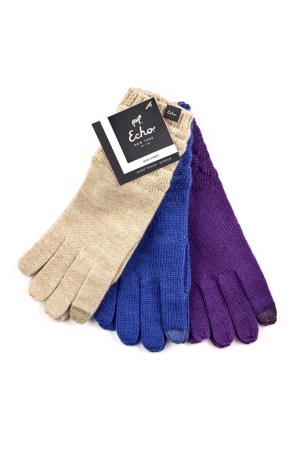 NEW YORK — Echo is getting a makeover. For fall, the accessories and home design brand will roll out a new logo, signaling a shift in branding and marketing strategies. “There is such an amazing heritage and richness to the company, and from a branding and graphic identity point of view, I don’t think we were necessarily telling our story,” said chief marketing officer Randy Kabat. “The whole concept was to embrace our heritage and leverage as what moves us forward.”

The logo itself, designed by creative agency Marty Weiss and Friends, is a big shift from the streamlined version, which simply reads “Echo Design” in lowercase letters. Kabat found inspiration for the new look when working on the brand’s 90th anniversary last year, as a trip to the archive unearthed an original script logo. “It kind of became apparent that this new logo should have the original script at its core,” she said. “So many brands today are using typeface and font that invoke the essence of heritage and it’s really legitimate in this context.”

Below the script sit two lines that spell out the history of the brand in simple terms: “New York, EST. 1923,” signifying the origins of Echo. “The company has been in a four-block radius in New York City for its entire 91-plus years, and we weren’t really owning that,” said Kabat.

The final component of the logo is easily its most noticeable: a zebra covered in polka dots. “It is a zebra who changed its stripes,” explained Kabat. “It is a nod to our history in print and pattern, and also to our ‘never take yourself too seriously’ attitude….It is this idea of changing your stripes while embracing who you are. Be open to new ideas, but it doesn’t have to change the core of your being.”

The logo will roll out in July when the collection hits retail on all hangtags, packaging and labels. Echo will also launch a new Web site and in-store concept, based heavily around the zebra logo at that time. “As part of this whole process, we will embrace connecting with the consumer more closely, partnering with retailers to better tell our story on the floor and enhance productivity and engagement with the consumer,” said chief executive officer Steven Roberts.

Echo does not operate any stand-alone stores, but is carried in just under 3,000 stores in North America, including major department and specialty stores. Categories include cold-weather accessories, bags, swimwear, bedding, tabletop and window coverings, among others. Fashion accessories account for about 50 percent of all sales, with home at 35 percent and beach and swim making up the remaining 15 percent. By incorporating the logo across all categories, Kabat hopes to create a more cohesive feeling of recognition for the brand, regardless of category.

The ultimate reason for change, Roberts noted, is not to erase the brand’s 90-plus-year history, but rather, to maintain and build relevancy within the market. “People who have felt comfortable with us in the past will know us in a richer way,” he said. “We want to, first and foremost, connect more powerfully with everyone who knows us, and then people who don’t know us but actually own our products, register that and grow. The goal would be to broaden our customer base and business.”