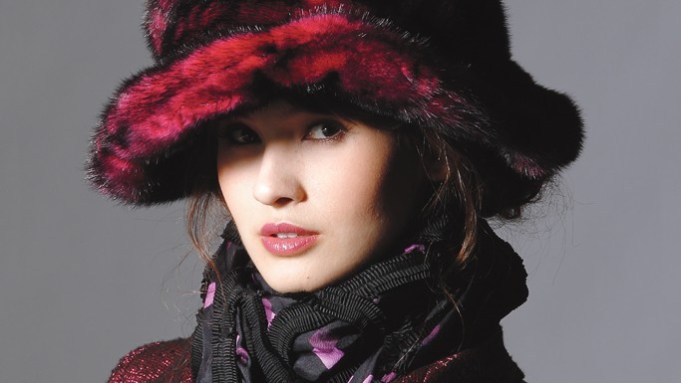 It started in New York with Marc Jacobs, who accessorized each of his 54 fall exits with an exaggerated fur hat, and ended in Paris with the designer’s parade of extra-large toppers at Louis Vuitton. In between, hats made a significant statement on many runways, from Donna Karan, who drove home her men’s wear theme with small fedoras, to Giorgio Armani, whose models turned their heads mid-runway to draw attention to their trilbies.

Fashion is clearly having a hat moment, but can the trend make the leap from runway to reality? For Jacobs, it’s a no-brainer. “As we’ve done hats many seasons before with Stephen Jones, we’ve seen that the more exaggerated and statement hats we do, the more women want to own them and wear them,” he says. “As with all our accessories, it’s the statement pieces that our customers want.”

His fall hat lineup will be sold at all Marc Jacobs collection stores, including other retailers such as Saks Fifth Avenue, which picked up a selection for its fur departments. Saks’ senior fashion director Colleen Sherin believes that fashion’s newfound love for the category will help drive the business. “They will be editorialized in fall fashion magazines, which will bring more awareness to the category as a whole,” she says. “And it may make people think twice about hats being not just knit caps but also these amazing fur options.”

Or red-fringed bowlers, for that matter. Jason Wu tapped Paris-based Maison Michel to make said hats for his fall collection, which was inspired by the Chinese Qing dynasty. “I think there is a particularly dressed-up moment happening in fashion right now, and hats seem like the perfect accessory for the look,” Wu says. “It is about being put together from head to toe.”

Milliner Eugenia Kim, meanwhile, looked to the Art Deco movement and film noir for her latest lineup, which includes wide-brimmed fedoras and cloches as well as a mini fedora. “There is a huge shift happening from the casual luxe styles that have been so prevalent recently to a more intentional, feminine way of dressing, and hats really help encourage the total look,” says Kim.

Long ago a mandatory accessory for women, hats as a category has been on the decline at least since the Second Vatican Council (1962 to 1965), when hats became no longer mandatory in Catholic churches. With society’s continued casualization, they have since been largely sequestered to special occasions, but if there was ever a moment that seemed right for the old staple, it could be now.

Brooke Jaffe, Bloomingdale’s fashion director of shoes, handbags and fashion accessories, says last year’s royal nuptials and its full display of hats, “was the beginning of a cultural movement, with the eyes adjusting to it looking right again.” She points to “Downton Abbey” and this summer’s Queen’s Jubilee as other “outlets of fantasy dressing” that might make hats work. That said, Bloomingdale’s did not increase its fall buy compared to last year, but Jaffe notes that this season features a greater fashion-driven assortment of hats from designers such as Eric Javits, Helen Kaminski, Genie by Eugenia Kim, Kate Spade and Helene Berman.

Neiman Marcus senior vice president and fashion director Ken Downing also is noting a renewed interest in hats due in part to fashion’s current “dressed-up and polished way of dressing,” but, like Jaffe, he isn’t fully buying into the trend just yet. “Are we ordering more hats at Neiman Marcus? Not necessarily. It’s very specific to a woman who enjoys wearing a hat.”

On that note, Downing added one important point: “The hairdresser is the modern-day milliner for women. Putting a hat on is not something we see many women changing to.”